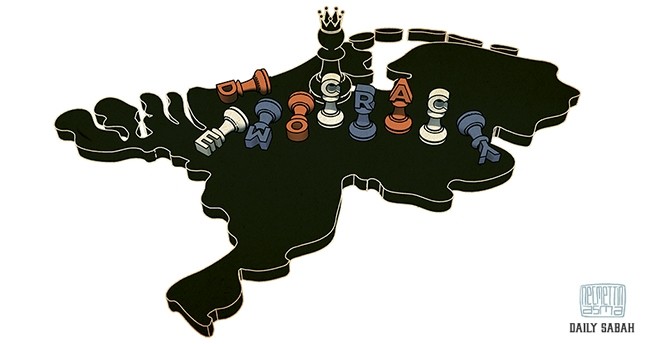 Turkey is heading for a referendum on April 16 and at issue is a constitutional amendment proposal prepared in accordance with the Constitution of the Turkish Republic. I have been involved in the process from the beginning as a deputy, and as a member of the Parliamentary Constitution Committee.

Not only the committee's members, but all of the deputies from other opposition parties, the Republican People's Party (CHP) and Peoples' Democratic Party (HDP), addressed the committee. The duration of the speeches made at the committee totaled 300 hours. The proposal was eventually accepted by the committee and referred to the General Assembly and it was consequently passed into law after finding the adequate support.

According to our Constitution, in order to put constitutional amendments to referendum, 330 votes are needed in the 550-seat Parliament. If the "yes" votes reaches or exceeds 367, the proposal becomes law without a referendum.

But the AK Party and the MHP pledged from the start to put the amendments to popular vote even if the bill secures 367 votes. I think this is a democratic stance par excellence because the proposal contains articles intended to change the government system of the Turkish Republic and introduce a presidential system.

Of course, a host of other articles will also be voted on including the abolishment of military high courts and annul martial law, lowering the age requirement to stand as a candidate in an election from 25 to 18, and raising the number of seats in Parliament from 550 to 600 in order to increase the representative power of Parliament in line with a growing population.

Debates at the General Assembly continued for nearly 10 days. Unfortunately, the overly militant attitudes of opposition parties marked the process. A CHP deputy approached Fatih Şahin, the AK Party deputy chairman, from behind and broke his nose. Trabzon Deputy Muhammed Balta, who fell to the ground during a brawl, was bitten on the leg. The speaker's podium in Parliament was destroyed. An independent deputy, a former CHP deputy, handcuffed herself to the podium. These acts have deeply upset both our people, who watched the process closely, and us.

Despite all this, however, every possible view on the proposal was expressed. All the articles of the proposed bill were voted on in two rounds, both individually and as a whole. The bill was voted into law with more than 330 "yes" votes, paving the way for the referendum in mid-April.

In a process that runs democratically, the propaganda period has already begun. Everyone has been trying to explain to voters why the proposal should be approved or rejected. Of course, this process deeply interests not only the voters living in Turkey but also the millions of Turks working abroad or live abroad with dual citizenship. According to our laws, every Turkish citizen, whether they live in Turkey or not, has the right to vote. And this is yet another sign of democratic maturity.

Naturally, parties can reach out to all voters living abroad and explain their views to them. Especially European countries, where millions of Turkish voters reside, come to the fore in this respect. Recently, Justice Minister Bekir Bozdağ passed from France to Germany and tried to meet with voters in the town of Gaggenau. Sadly, however, he was denied that opportunity in a biased move. The ensuing crisis was exacerbated by irresponsible statements. Austria and the Netherlands announced, through their prime minister and foreign minister respectively, that they would not allow this right to be exercised.

Following this prohibition, the flight of Foreign Minister Mevlüt Çavuşoğlu was not allowed to land in the Netherlands. This was a huge diplomatic scandal and disrespectful development. When we were expecting those behind the scandal to their learn lessons, a bigger crisis emerged: Family and Social Policies Minister Fatma Betül Sayan Kaya was blocked from addressing Turkish people in the Netherlands. On top of this, she was then locked up in her car and was later denied entry to the Turkish Consulate in Rotterdam.

Meanwhile, another scandal happened as the Turkish consul was taken into custody. However, the crisis would not end there, increasing step by step: the minister was stopped from getting out of her car by Dutch police. EU citizens of Turkish-origin gathered around the Turkish Consulate to protest the unprecedented incident but faced the canine units of the Dutch police, which badly injured them.

What's worse, the mayor of the Rotterdam, Ahmed Aboutaleb confessed that he ordered the police to open fire on the Turkish minister and her security guards. The mayor's answer to the question "A minister came, what could be there?" deepened the scandal.

"The minister came there with 12 broad shouldered men. We didn't know whether they had guns or not. They could [open] fire," he answered.

The mayor's words in the confession speak of the complete end of common sense. Just imagine if one of the "12 broad shouldered men" accidentally moved his hand over his belt, the special police team would have opened fire on a guest female minister of a state. It's horrible even to imagine that!

Obviously, these obstructions have targeted only those conducting the "yes" campaign. There has been no hindrance whatsoever to the activities of the HDP and PKK. In this case, the exercising of a democratic right was wrongfully portrayed as "exporting Turkey's problems to Europe." Actually, however, what turned out was the exact opposite: taking sides in one of Turkey's domestic issues.

Of course, that attitude drew serious reactions from the Turkish public. Turkey already feels disappointed since it has been treated with double standards in the EU accession process and other relations. Above all, delayed or ambiguous reactions from European "friends" during the July 15 coup attempt and their almost mournful mood over the failure of the coup has deeply hurt Turkey. Understandably, Turkey has started to ask who their friends and who their foes are. Most particularly, Europe and especially Germany are showing lenience toward members and sympathizers of every anti-Turkey armed organization including the Gülenist Terror Group (FETÖ) who are the accused perpetrators of the July 15 coup attempt, and the PKK. This cannot be overlooked by Turkey.

Officials from the Presidency of Religious Affairs, a crucial bulwark against radical groups all over Europe, have been and still are treated as spies in Germany with the intention of eliminating them. Knowing that FETÖ maintains its power in these countries complements this picture.

Though all these seem to be unpleasant developments targeting Turkey in the short term, actually they are moves that will likely get Europe, and particularly Germany, into a serious mess over the medium term. Preferring terrorist groups to Turkey amid unfair campaigns against it, despite the fact that Turkey is the strongest democratic bulwark against possible damages from the Middle East would bring no good to anyone.

Turkey is ruled by a party that has been democratically elected in 11 successive elections. More importantly, there is democratic public opinion, which I believe has written the most amazing democratic epic of this century, stopping tanks dead in their tracks on the street. The whole world should see this and understand that it represents a significant guarantee for the world.

We are aware that a bloody game is being staged in the Middle East with respect to a new world order and struggle for the control of resources, and that Daesh, the PKK and the Democratic Union Party (PYD) are used as levers. But I wonder if the new world order and actors' interests will be secured through terrorist organizations.

Indeed, this method was employed during the 20th century through the Taliban, al-Qaida, Daesh, and "secular" terrorist groups as opposed to them. Has the refugee crisis, radical groups and the rising racism that threatens Western democracies today not stemmed from this ominous choice?

How long will it take to understand that the operation, which has been deliberately conducted to create the impression that a radical group rules Turkey under a dictatorship, fails to achieve its dark goals while creating the risk of losing Turkey? Doesn't it occur to anyone that Raqqa would have become a neighbor to Europe with millions of refugees flooding the continent, if the people of Turkey had been unable to thwart the coup on July 15 and if an ensuing civil war had begun to turn Turkey into another Syria?

No one claims that Turkey is above criticism or free of problems. But we want to know which aspects of the EU accession process, the reports prepared, and the attitudes adopted by institutions are objective and constructive, and which ones are intended to design Turkey's domestic politics.

We don't live in a rose garden or in a world of wishes. We are equally aware that a dynamic Turkey becoming ever stronger may annoy others in the international arena. But don't we have the chance to choose between carrying on this struggle on a principled basis and resorting to morally dubious methods?

Even if that question has a negative answer, Turkey has managed to stand and press for a third alternative. We need to comprehend that we must close the World War I and the Cold War era. The world has changed and we cannot manage this change with old methods. Turkey is a strong Muslim nation that is always open to collaboration and it can keep a dialogue with both the West and the East at the same time. It has internalized Western values and the principle of liberal secularism. We need to understand that this is a huge opportunity and asset, let alone a threat.
Last Update: Mar 21, 2017 4:05 pm
RELATED TOPICS