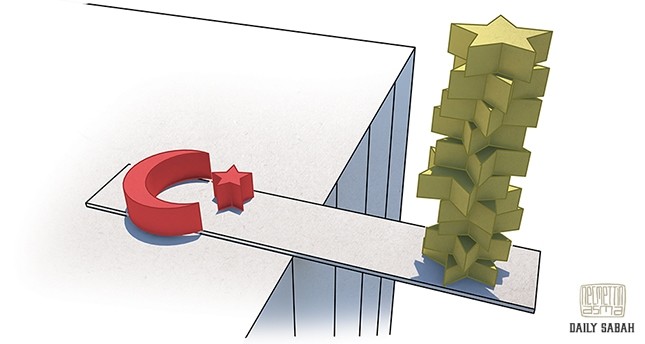 The breakdown in relations between Europe and Turkey can only be a bad thing for those countries who can't afford to allow more support for far right parties. If this trend to punish Turkey continues, the EU will be the ultimate loser

And so the Turks have been left out of the final push for Raqqa. Should the rest of the world be bothered by Ankara being sidelined or marginalized in this important military event?

I would argue that on its own Raqqa is not so relevant, but if Turkey's importance in the region is continuously not recognized, then at some point there will be a breaking point that will put Ankara back on the map as one of the most important geopolitical players. President Recep Tayyip Erdoğan's patience is not unlimited, after all, and many, including myself, have admired how he has stood firm with what can only be called "abuse" by powerful blocks in recent months. Something has got to give.

The attack on Raqqa, has already kicked off with the U.S.-led coalition (mainly airpower), Assad's army supported by the branch of Iran's Armed Forces, The Army of the Guardians of the Islamic Revolution (IRGC) and the Shiite militias, the Syrian Democratic Forces (SDF) with its PKK-affiliated Peoples' Protection Units (YPG) and Russia's military backing. Perhaps Turkey adding to the confusion would not have been wise.

And Ankara has other, bigger fish to fry anyway.

For the moment, Erdoğan's administration will have to put a lot of trust in the U.S. keeping its word that the YPG will "eventually" pull out of east Euphrates after Raqqa. Military commanders in the U.S., Russia and Turkey met in the Turkish province of Antalya on March 7 to thrash out the details of the attack on the Daesh stronghold and work out which groups get to carry out which duties. But Turkey also places a lot of trust in Russia, which has promised Ankara that there will be no independent Kurdish entity across its borders and Syrian territories will not be used to attack Turkish targets.

If both of those promises are kept, then there is little point in Turkey having its troops be part of the final push for Raqqa. Straddling both of these super powers and retaining their cooperation and assistance puts Turkey in an incredibly powerful and important position – and yet at the same time also makes it think much more about its relations with the EU and Europe as a region on multilateral relations.

THE FALL OF EU DIPLOMACY

And yet sometimes it is the dichotomy of logic and political achievement (or survival) that clashes in Old Europe and makes Ankara pay the price. The recent cold shoulder by a number of European countries to host Turkey's ministers is a signal of something that has been brewing for some time from individual EU member state governments who have taken the lead from Brussels whose own top officials were responsible in the total collapse of Turkey-EU talks in the autumn of last year. What we are witnessing in recent weeks with the fiasco in the Netherlands (and probably soon in Denmark) is the EU's own bumbling diplomatic service, which, to be fair isn't very good. In fact, it is in shambles.

Turkey was once the EU's gem of accession countries. If Brussels could "tame" a modern, secular Muslim country to be more "European" in regard to human rights and free press, then the EU would be rewarded by member states and the accession process could continue. Don't forget, for the EU's survival, constant expansion – don't laugh – is the name of the game for PR.

But as Turkey snubs Brussels offer, what we are seeing is the beginning of a panic set in, in Brussels. Who else will join the EU? What message does that send to Serbia, Macedonia and Montenegro? Could these countries, like Turkey, forge a new, stronger more beneficial relationship with Moscow?

If we cast our minds back to the months leading up to Turkey's failed coup in July of last year, two senior German officials in the European parliament berated and ridiculed Erdoğan with their constant rapprochement of his administration and how human rights were being ignored as a more authoritarian government took the helm.

But then when the attempted coup came, neither of those two officials made any sympathetic statements to the Erdoğan administration. Big mistake. Ankara could only therefore assume that the EU actually was hoping that the Erdoğan presidency would be toppled by the military coup. And despite the comical shuttling to Ankara by those two members of European parliament – only to be followed by the EU's foreign envoy herself – the message was clear. It was too late. The diplomatic buffoonery forced Ankara to ask itself "do we really even need EU membership" to a project that was already falling apart politically and didn't offer anything remarkable in terms of trade benefits. The main attraction was people movement and Turks getting jobs in the EU. But if the EU couldn't even give Erdoğan a new visa-free deal for tourists, then it was hardly going to allow Turkey to benefit from access to a labor market in the Eurozone, which only makes on a good day with the wind behind it about 0.5 percent growth. Pathetic.

It's the EU's failure and its subsequent deluded ideas about its own importance that will be its downfall if it doesn't patch up relations with Turkey. Erdoğan has very little incentive to keep the EU sweet by sticking to his deal to retain 2 million Syrian refugees. If he were to behave like a real dictator, which EU leaders claim he is, then he would have already sent over a couple hundred of thousand just to throw a rock into the hornets' nest of countries like Germany and France, whose own political elites can't keep control any longer if any more social fall out occurs from refugees. The more Syrian refugees, the more support for far right groups. It's that simple.

And if Marine Le Penn wins the French presidency, the EU will be over within weeks as it cannot sustain yet another Brexit or Frexit. In the meantime, the EU has the answer for its own quagmire. Oh yes it does. More EU. Yep, with the lowest credibility in its history, with more countries talking of leaving the club, with the lowest growth, highest unemployment and the spectacular economic tsunami – otherwise known as the "euro" – the EU's top brass has the solution: Increase funding to media outlets to pump out more fake news and create a new EU army to generate more press coverage to "fake" the EU's importance. But if Syrian refugees enter the EU via Turkey, there won't even be time for any of that. It is remarkable that the EU doesn't show a little more respect for the Turkish people and Erdoğan. And it is even more remarkable that neither Trump nor Putin have made that call to tell him to open the sluice.

* Martin Jay recently won the U.N.'s prestigious Elizabeth Neuffer Memorial Prize (UNCA) in New York, for his journalism work in the Middle East. He is based in Beirut.
RELATED TOPICS