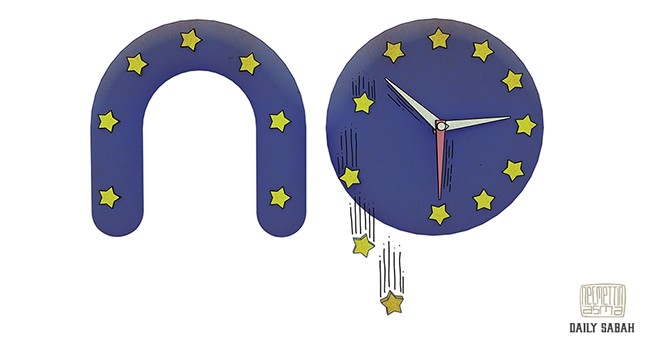 As the German state pursues supporting any anti-Turkish propaganda, the tension between the two countries will continue to escalate

The general elections are approaching in Germany and it is interesting to see how the rhetoric of German politicians has become more and more populist with each passing day. This is observable in the current discussions about Turkish politicians' planned rallies in German cities. For more than 50 years, we have not seen such a negative agenda or propaganda against any country. Dictators and coup plotters, like the Egyptian leader Abdel Fattah el-Sissi, who toppled the democratically elected former President Mohammed Morsi in 2013, were welcomed with open arms in Germany, but the current intolerance against Turkish governing politicians is shocking and disappointing.

The cliché sentence of this topic would have started with "Turkey and Germany have a historic relationship and friendship," as said by German Foreign Minister Sigmar Gabriel last week. But these words are simply empty and no longer sufficient. Germany has an exaggerated love-relationship with terrorists and supporters of terror toward Turkey, such that the country has welcomed the Turkish daily, former Cumhuriyet Editor-in-Chief Can Dündar, who is wanted in Turkey on charges of supporting the Gülenist Terror Group (FETÖ); tolerated the Gülenist coup plotters and also allowed the supporters of the outlawed PKK to rally within their borders. That is why the Turkish state and general public are disturbed. If we were able to genuinely talk of the friendship between the two countries, as German foreign ministers stated, Germany would not have acted as it has.

What is more, the claim by German politicians that Turkey is bringing its domestic political issues to Germany is not true. The German authorities groundlessly canceled Foreign Minister Çavuşoğlu's meeting by threating the owner of the conference hall where the meeting was to be held while the hotel reservation of the minister was also later canceled.

Following these bans, more shocking news came as Justice Minister Bekir Bozdağ and Economy Minister Nihat Zeybekci were not allowed to meet fellow Turkish citizens in Germany due to some 'security reasons.' German Chancellor Angela Merkel's words on the bans against Turkish ministers were strange indeed: She claimed that the prohibition was taken by the local municipalities, not by the government, but the Head of Association of German Municipalities Eva Lohse denied the claim and said the responsibility for the bans should not to be passed onto the municipalities.

These were definitely not friendly and welcoming actions; they were systematically harassing and provoking ones. It is no surprise that those practices caused tensions to rise and worry both in politics and society.

It is comprehensible that millions of Turkish voters in Germany or in other European countries expected their political Turkish representatives to meet them in Germany before the upcoming referendum on constitutional change in Turkey on April 16.

Additionally, Germany's support of the 'no' campaign regarding Turkey's constitutional referendum was also clearly observed when German state broadcaster ARD advertised in the Turkish language, intending to convince the Turkish community to vote "no" with false information.

Indeed, nowadays, German media outlets are busy making subjective and manipulative news against Turkey. They do not allow their audience to get unbiased and objective information on Turkey or the next referendum. Furthermore, not only the private media but the state media are also leading this anti-Turkish propaganda campaign, which clearly shows that the German government is consciously taking a clear position in Turkey's constitutional change. So, the accusation that Turkish politicians are importing Turkey's domestic matters into Germany is nonsense.

However, the approaching general elections make populism in Germany to a dominant daily atmosphere. Being unable to stop any kind of radical nationalist rising in the country makes German politicians slip to this basis as well, especially with the right-wing Alternative for Germany Party (AfD) as an opponent. These oppressive, discriminative and populist statements from German politicians may be temporary, but the negative impact on society, the polarization and hate, which these statements are provoking, will be long-lasting and distressing, especially when European countries like Germany are unable to endeavor to develop efficient politics against the rising of radical far-right nationalists. The disastrous diplomacy and politics of Germany and even the Netherlands may end after the constitutional referendum in Turkey, as these are actions to openly campaign against the Turkish governing party's attempt for a constitutional change. Yet, the effect these actions have on society will remain even after the crisis ends. To make this point more clear, we talked to people who currently suffer from the mentioned social results of the disastrous suppressive politics of Germany.

From primary school to academic university, at every level, Turkish people are forced to openly speak about their opinion on Turkey and Erdoğan, ideally negatively and hatefully, which is the only acceptable option.

Last week, students of a high school in Germany were asked to write a letter to "Dictator Erdoğan" in the social sciences class. They had to give advice on how "Dictator Erdoğan" could improve democracy in his country. A Turkish student, who asked to remain anonymous, refused to write the letter obviously due to the biased question and with the conscious word selection "dictator."

He was immediately dismissed from class, as the teacher, "Mr. M. could not bear such an attitude."

After the student's aunt posted this incident on Facebook complaining about the bias and intolerance, the student was the victim of mobbing and discrimination by his classmates. Moreover, he was threatened "to take care of himself especially in the prayer room at school." Now, the student is scared about being suspended from school, as he neither received support from the administration, his teachers nor his friends. The family could not bear the suppression, so they have decided to keep quiet and stand back.

Last year, during the discussions on Jan Böhmermann's insulting poem, Esma A. posted a video of herself, speaking her opinion, critical of Böhmermann and supportive of Erdoğan. She was immediately fired from her job at the Sparkasse Köln/Bonn that she had been working for over 10 years.

"It was a shock," she said. "It was not expected, I was working like I did normally, like every other day for the past 10 years."

She was confronted to deal with the consequences of openly speaking about her opinion.

Osman G., a Ph.D. law student mentioned in a conversation how frustrated he is in Germany and that he does not see a bright future for himself there. He spoke about an experience that caused his frustration to deepen. Having applied for a research program on Turkey's constitution, he was asked by the German professor about the latest political situation in Turkey.

When asked about the topic of religious minorities, he made the "mistake" of saying that "their situation is not bad, nowadays." The professor found this opinion absolutely inacceptable and said, "You mean their situation is fine? This is impossible!" The interview was expected to take an hour but awkwardly ended immediately after this response.

Likewise, normally the results were supposed to be announced after at least three weeks, however he got his result in less than 24 hours: Negative. Osman said, "My working area, law is basically pertinent with politics, so at the end I have to openly speak about my political views, which are not acceptable in the current environment in Germany. Therefore, I do not have future career expectancy in Germany due to political and social reasons, despite my academic and social background."

He is now evaluating other options, including leaving Germany.

Y. is a director of a hotel chain in Germany. Because of her posts supportive of Erdoğan and the ruling Justice and Development Party (AK Party), some of her German employees presented her as an "enemy against Germany" in the company. What's more, her business adviser has been called to find out specifically about her political opinion.

Consequently, during the evaluation of the company, Y. was forced to shut down her social media accounts to prevent building up an unfair negative reputation of her hotel group. After having experienced difficult times, Y. decided to cancel all TV and newspaper interviews and to keep quite. Her political opinion had to be silenced to be successful in German business.

In conclusion, the current German political administration lacks the ability to construct a real political agenda that touches Germany's real domestic problems; they choose to create an artificial crisis in order to mobilize its constituency around an anti-Turkey campaign. The more narrow and exclusionary the political language becomes, the more the society becomes a narrow and exclusionary one itself. Making a peaceful living environment in Germany for Turkish people and those from other backgrounds is dependent on this political language, as political words and populism do not remain just resentments and propaganda. Racism, discrimination and hate are real and the responsibility politicians have to take for this has to be real as well.