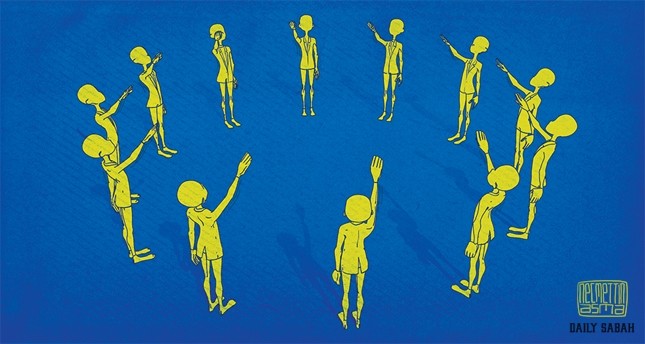 The disgraceful treatment shown toward the Turkish minister in Rotterdam has laid bare the ugly truth that European values have been poisoned with the venom of the far right.

The issue of European xenophobia and extremism against Muslims has again started to occupy headlines this week with many European governments and local politicians such as Moroccan-Dutch Mayor of Rotterdam Ahmet Aboutaleb taking a series of scandalous decisions to aggravate the crisis with Turkey. The internationalization of Turkey's constitutional referendum and Europe's active involvement on the "no" side occurs against the backdrop of a steady surge in xenophobic, Islamophobic and racist movements across Europe in recent years, pushing the center of political gravity to the extremes. Political parties representing the extreme right and pseudo-fascist movements are increasingly poised to gain a stronger presence in the parliaments of key member states of the EU. Although the controversial Geert Wilders's far-right party did not emerge victorious at the end of the Dutch elections, the results confirmed the upward trend: Declining center-right, liberal and social democrats versus surging extreme right-wing, neo-fascist politics. Wilders's party came second in the Dutch elections following Prime Minister Mark Rutte's center-right party, and their upward trend continues in line with many far-right political movements across Europe.

The ascent of the European far-right merits consideration in view of rising anti-Islamic, anti-Turkish, anti-Erdoğan political rhetoric as well as totally anti-democratic practices adopted by political authorities in various states. For instance, the Rutte administration's deliberately rude handling of the visit by Family and Social Policies Minister Fatma Betül Sayan Kaya to the Turkish Consulate in Rotterdam to meet the Turkish communities as part of the constitutional referendum campaign raised eyebrows. Although Rutte successfully used the incident to protect his voter base against the rise of Wilders, the shift of mainstream political parties toward anti-Muslim extremism also merits consideration to evaluate the future of European democracy.

For years, both the central and local governments in Europe have been devising methods to fight off radicalism and extremism in their cities in the name of preserving values such as human dignity, civil liberties, tolerance and peaceful coexistence. In this context, the Aarhus Model, Vilvoorde's Kindness Method and Rotterdam's Resilience Strategy were introduced to the public as the best practices designed to achieve these aims. Therefore, it is really paradoxical that domestic political conjunctures rapidly moved these cities from centers of tolerance and peaceful coexistence to anti-Muslim extremism and physical attacks against Turkish ministers and citizens.

Interestingly, last year in November, I had the chance to represent the Turkish National Delegation of Council of Europe, The Congress and the Monitoring Committee in the European Mayors Summit in the Netherlands. The theme of the summit was the "Alliance of European Cities Against Extremism," and the host was the now controversial figure of the Muslim Mayor of Rotterdam Ahmed Aboutaleb. Mayors, municipal assembly members and officials from municipalities across Europe came together to discuss ways to cooperate and possible joint strategies to tackle radical movements and violent extremism in their cities. European mayors indicated various experiences of sharing responsibility for combating extremism and terrorism at the local level. Needless to say, all participants confirmed that the root cause of violent extremism cannot be identified as the religion of Islam or Muslims. On the contrary, they indicated that those resorting to terrorist acts use distorted and twisted versions of religious concepts, but this doesn't make a religion or its followers the source of violence. But it is sad fact that even Aboutaleb, who was seemingly trying to establish an alliance against extremism one year ago, started to act like a xenophobic, Islamophobic far-right politician. His unacceptable attitude against the Turkish minister and use of brutal police force against Turkish civilians in Rotterdam was in total contravention with his stated goals.

Growing far-right movements in Europe misled the direction of public debate and perceptions on violent extremism, painting a false picture of Islam and Muslims. There are millions of Muslim people living in various European countries. They make great contributions to their host societies and most of them hold dual citizenship. They have lived in Europe for many generations, and they are no longer temporary migrant workers but permanent residents.

There is an important interplay between violent extremism and the rising far-right in Europe. Attacks conducted by violent extremist groups, particularly Daesh, in Europe and across the world strengthen the hand of far-right movements in public discussions. Using a demonizing line in disconnection with reality, the discourse employed by far-right movements identifies Islam and Muslims with terrorism, and call for undemocratic and fascist measures to contain the so-called "Islamic threat." This line, in return, helps recruitment efforts of violent extremists, alienating large masses of Muslim people in Europe that stay clear away from violence and want to become equal citizens of their host societies. Both terrorist attacks conducted by Daesh and this far-right discourse poisons the public perception of Islam and Muslims, further exacerbating the situation.

Drawing on misrepresentations of Islam and Muslims, far-right figures like Wilders frequently resort to hate speech and insults, vowing to implement measures like completely banning the Quran, shutting down all mosques, making Muslim women's headscarves illegal, or forcing all symbols and reflections of Islam out of the public sphere. Continually pontificating about the Islamization threat in Europe, and repeating claims with no substance give the European social conscience a dangerous subliminal message of alienation and discrimination based on religious identity.

Because of hate speech and venomous propaganda by far-right leaders, Muslims no longer feel secure in a European society that has always celebrated its multicultural richness. Muslims can be subject to acts of bigotry or violence at anytime and anywhere in this social climate of fear, enmity, and bias. Attacks on mosques in Europe have been growing in frequency in recent years. The far-right rhetoric urges Europeans to believe that every Muslim or any Muslim community is a potential threat to their society, and must be under control with strict political, legal and security measures. Muslims living in Europe are not outcast or ostracized minorities in ghettos but they are highly integrated in their host societies as friends, neighbors, business people, lecturers, artists, teachers, lawyers, doctors, scientists, writers and politicians. Their economic, cultural and moral contributions enrich their host societies in every aspect.

European politicians, officials and authorities at local, national and supranational levels need to better understand the sources of radicalization and violent extremism to keep themselves away from traps set by far-right groups. And, local, national and supra-natural authorities in European countries must have a clear definition of extremism or radicalism, not leaving the door open for misguidance and abuse by far-right politics. Opting for the path suggested by the far-right may be politically lucrative but will bring Europe closer to a dead end, undermining democratic values promoted by European institutions and the bodies of the EU. Europe cannot fight radicalism and violent extremism with a strategy based on hate, fear and demonizing.

The Dutch authorities' unlawful and undemocratic treatment of the minister and the consulate was an alarming sign of the European mainstream politics hijacked by dangerous far-right populism. This disgraceful event took place in the run-up to the elections in the Netherlands, and Prime Minister Rutte, a center-right politician, acted like his right-wing contender Wilders, who is known for his hateful statements on Islam, Muslims, migrants and refugees.

With the shameful treatment toward Minister Sayan in stark contradiction with the democratic values promoted by Europe, the Netherlands gravely breached international law and democratic principles. These events feed an ever-growing disillusionment on the part of Turkish and Muslim people with European democracy and the EU project. Everybody is aware that while preventing Turkish officials from addressing communities as part of the constitutional referendum campaign, a number of European countries open doors for terrorist organizations and naysayers. This glaring double standard also adds to the disillusionment with Europe. Geert Wilders's and his party is not - yet - in power, but sadly they crystallize the extremist direction that Europe is heading in.

* Council of Europe, The Congress of Local and Regional Authorities, Member of Turkey's National Delegation

* Council of Europe, The Congress of Local and Regional Authorities, Member of Turkey's National Delegation
Last Update: May 11, 2017 10:29 am
RELATED TOPICS