The post-truth in constitutional referendum 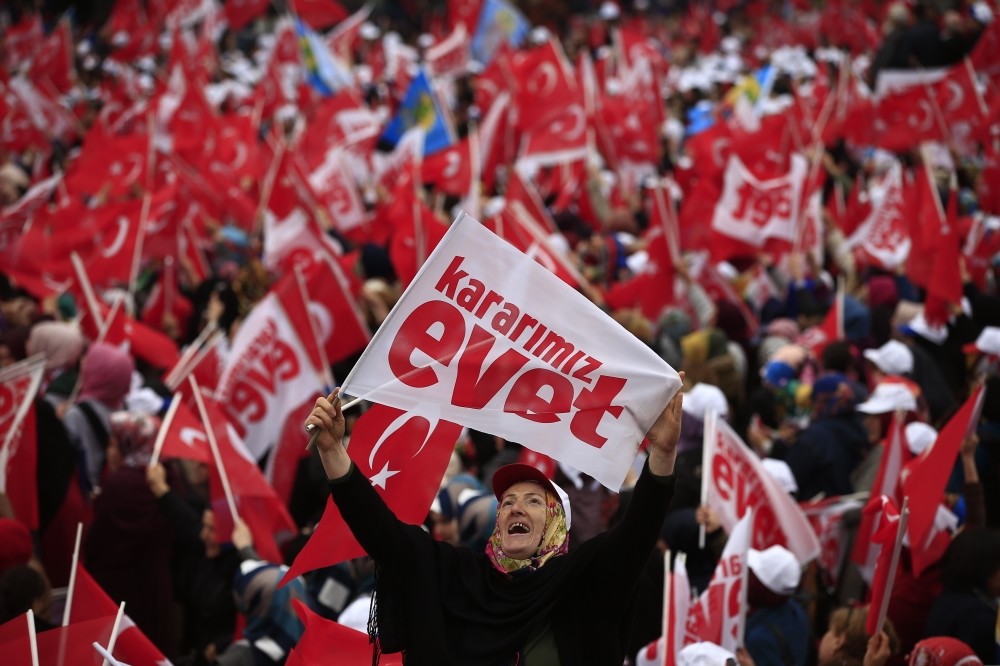 A supporter of the 'yes' campaign waving a banner, reading ,'Kararu0131mu0131z evet' which is translated in English as 'Our decision is Yes', referring to the April referendum, during a rally in the northern city of Rize, April 3.
by Ali Murat Yel Apr 05, 2017 12:00 am

The concept of post-truth could be new, but the meaning is as old as the Turkish land and the public is well-aware of the fact that any amendments in the junta-drafted constitution would be welcome for democratization

Last year was another anno horribilis for Turkey, which has suffered economic and political problems periodically since its foundation almost a century ago. It seems economic recessions feed political catastrophes, which in turn often result in a socially chaotic atmosphere. A failed coup attempt on July 15 distinguished the summer of 2016 from all other crises in Turkey. It is true, the country has not come to grips with the fact that a secret group infiltrated the official structure of the state and, more importantly, the armed forces so that its members could try to take power by force, even going so far as to carpet-bomb the nation's Parliament. Many people simply could not comprehend the nature of such a horrible event, where people in army uniforms — something sacred for the Turkish nation for historical and cultural reasons — could kill some 250 innocent and unarmed people with the ammunition provided for them to defend the country.

Modern states are called upon to protect their citizens against all kinds of threats but this time the simple Turkish folk had come to protect their state and hard-earned democracy against such terrorizations. Repulsing the coup attempt, a feeling of unity against common enemies of the nation and democracy arose within the political atmosphere. It seemed that pre-coup-attempt rivalries were forgotten and a new path toward a harmonious future had started being constructed. The "Turkish Spirit of August 7" with a rally of more than 1 million people in Istanbul brought different and opposing parties of the Turkish political and ideological landscape together. This was a great turning point in Turkish history, in that civilians took to the streets to stop rogue soldiers in tanks and helicopters from seizing power. The failed coup also brought a new sense of belonging and feeling of nationalism to the people, who have been divided over simple and trivial issues of everyday life, by making citizens aware of the "parallel state structure" created by the Gülenist Terror Group (FETÖ), which is the perpetrator of the attempted coup.

THE FIRST CALL FOR REFERENDUM

The self-confidence of having defeated a coup attempt, unlike the previous military coups and junta administrations, has given Turkish citizens and political parties the dynamism to amend the Constitution, which was written by the military junta in 1982. The process of modifying the political system was started with the green light given by Devlet Bahçeli, the leader of the Nationalist Movement Party (MHP), in a speech in Parliament on Oct. 11, 2016. He recommended that the government bring the amendment bill to Parliament in order to correct the status quo. In fact, what he meant by the status quo was the current situation of President Recep Tayyip Erdoğan. Mr. Erdoğan was elected by popular vote, unlike previous presidents who were elected by deputies. Before and after his election, Erdoğan told the public that he would not be like earlier presidents, on the contrary, he would work very hard (he said his "toil and sweat") to serve his country. However, the current constitution expects the president to be "impartial" and approve or reject bills passed in Parliament with a small, symbolic power, yet "unaccountable" for all of her/his actions. Conversely, if a president wished to be elected for a second term, the Constitution was not clear on how the candidate would ask the public for support or how she/he would serve them if elected. The elected president was de facto using powers not specified in the Constitution de jure.

Almost on the same day, the government and the ruling Justice and Development Party (AK Party) started preparations for the amendment bill. Since the beginning of this amendment process, the government officials and President Erdoğan stated repeatedly that even if the bill passed in Parliament with a two-thirds majority (367 votes) the government and the president would put it to a referendum to be ratified by the majority of the public. Right after the final voting motion, the amendments were approved surpassing the 330-vote threshold to hold a referendum in January, the political parties, civil society organizations, and other groups immediately started their campaigns. In this latest referendum campaign, the classical division between the traditionalists and secularists has instantaneously emerged without due attention to the content. It was anticipated that ordinary people would not care for the particulars of the amendments due to the technicalities of the articles. So, it is not difficult to estimate the results; the classic 60 percent to conservatives and 40 percent to secularists. However, both sides during the campaign, especially the "yes" campaign, have been trying to explain the details of the amendments in order to convince their supporters. The understandable explanations of the eligibility for parliamentary candidacy, renewal of elections, powers and responsibilities of Parliament and the president and abolition of military courts, have been repeated at every opportunity.

On the other hand, the "no" campaign based their strategy on persuading people of the claim that the amendments would clear the path for Erdoğan to become a one-man authoritarian ruler. It seems that repetition leads to belief. In social sciences what is called the "truth effect" is one of the many biases that simple folk confuse with reality if it is repeated regularly enough.

Furthermore, if a statement, like "the Arab people use so many number of words to describe camels" varying from their walking style to their ages or "we do not use most of our brains" or "Eskimos have x amount of words for snow," is repeated by so-called experts, then people tend to believe them without questioning their validity. So, during this constitutional referendum campaign the concept of "one-man rule" was the most repeated phrase. As Hanna Arendt, who was imprisoned by the Nazis, put it succinctly, ". . . what convinces masses are not facts, and not even invented facts, but only the consistency of the system of which they are presumably part. Repetition, somewhat overrated in importance because of the common belief in the masses' inferior capacity to grasp and remember, is important only because it convinces them of consistency in time" (The Origins of Totalitarianism, 1951).

During the referendum propaganda campaign, the naysayers have continuously repeated false claims, like the dissolution of Parliament or any other state functionaries. Their entire premises were based on the fallacious and misleading argument of placing all the executive power in Erdoğan's hands. They have tried to conceal the fact that the package of 18 amendments is not about a change to the political regime, but simply a re-designing of the system in which "bureaucratic tutelage" would come to an end. The "appointed" intellectual and bureaucratic tutelage was based on the position of guardianship for their perception of modernity, which "elected" politicians could not challenge until today.

In the Turkish language, we have not yet translated the concept of "post-truth." We have, however, done it for the "fake news" of President Donald J. Trump as "lie news" (yalan haber). Perhaps it is easy for Turkish speakers because in the Turkish language "lying" about something covers "falseness, forge, sham, untruth, deceit, dishonest, invention, or even fabricating a false story." In the upcoming referendum the "no" camp has founded its campaign on the false idea of a "one-man administration," meaning that the referendum would bring changes in the governing system of Turkey to lead to a one-man totalitarian regime. Instead of developing counter-arguments against the 18 amendments, the "no" camp has chosen a condescending attitude toward the electorate, like they have done many times in previous elections. They have kept producing numerous pathetic statements on social media, like "in the referendum, you will be asked whether you are stupid or not, what are you going to answer?" or "this will be the last time you will vote, after this one nobody will ask your opinion again." The concept of post-truth could be new, but the meaning is as old as this land and the public is well-aware of the fact that any amendments in the junta-drafted constitution would be welcome for democratization and ending the bureaucratic domination.

* Professor of anthropology in the Department of Radio, Television and Cinema at Marmara University
Last Update: Apr 05, 2017 1:40 am
RELATED TOPICS