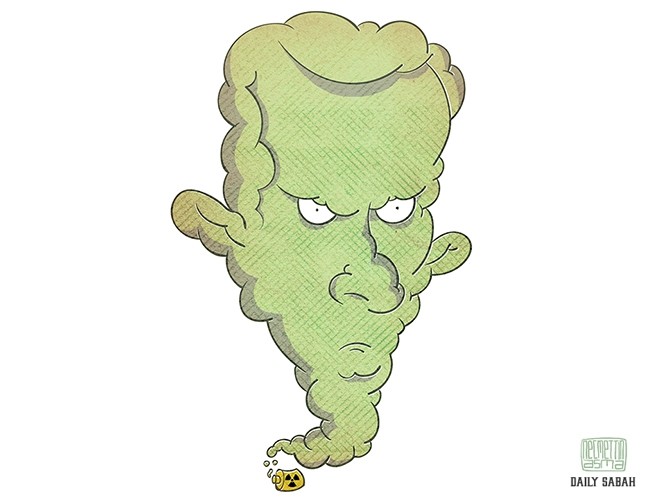 The Assad regime has used chemical weapons once again. This is a disgrace for the international community that sits idly by, watching, as tragedies continue to unfold

Tuesday morning, the world woke up to horrifying, distressing pictures of victims choking, vomiting and fainting with foam coming out of their mouths. The most heart breaking pictures were of young children laying down on the ground suffocated to death. Earlier that morning, the Assad regime's warplanes committed a gruesome war crime by using chemical weapons against defenseless Syrian civilians, killing 100 and wounding 400 more, the majority of them children, according to some estimates.

This is not the first time the Assad regime has used chemical weapons in the course of the ongoing Syrian civilian war. Reports of the use of chemical weapons go back to 2012. However, the issue was brought to the fore of international attention in 2013. On Aug. 21, 2013, the world was shocked to see images of Syrian civilians, including many children, who appeared to have been the victims of a horrific chemical weapons attack on the moderate opposition-controlled Ghouta area of Damascus. The United Nations investigation of the incident confirmed that chemical weapons were used there on a relatively large scale. Former U.S. President Barack Obama had previously described Assad's potential use of chemical weapons as "a red line" that would have "enormous consequences" and "change my calculus" on American military intervention in Syria's civil war.

However, President Obama had no appetite for military intervention, and Russia was interested in protecting Bashar Assad's regime. The way out was for the Assad regime to give up its chemical weapons in exchange for avoiding a U.S. military strike. This produced a decision on the destruction of Syrian chemical weapons program by U.N. Security Council resolution 2118 (2013) on Sept. 27, 2013. The decision set out an accelerated program for achieving the elimination of Syrian chemical weapons by mid-2014. An OPCW (Organization for the Prohibition of Chemical Weapons)-U.N. Joint Mission was tasked with the elimination of Syria's chemical weapons. The joint commission declared that it successfully completed its mandate on Sept. 30, 2014.

It was mind blowing for the OPCW-U.N. joint commission to declare that it had successfully completed its mandate. The Assad regime continued to use chemical weapons. A team of international chemical weapons inspectors concluded that the Syrian air force had dropped barrel bombs containing chlorine or some other chemical agent on two opposition controlled towns, Talmenes and Sarmin, in April 2014 and March 2015, respectively. The OPCW itself has repeatedly found traces of deadly nerve agents in laboratories that Syria insisted were never part of its chemical weapons program, raising new questions about whether Damascus had abided by its commitments to destroy all of its armaments.

The discoveries of precursors for chemical warfare agents like soman and VX at several undeclared facilities, including two on the outskirts of Damascus, underscored what a 75-page report by the director general of the OPCW describes as a troubling pattern of incomplete and inaccurate Syrian disclosures over the past years about the scope of the country's chemical weapons program. The Human Rights Watch in a report it published in 2017 claimed that Assad regime helicopters dropped chlorine bombs in residential areas in Aleppo on at least eight occasions between Nov. 17 and Dec. 13, 2016.

The Assad regime continues to use chemical weapons to strike again and again in the process crossing one red line after another. This is a disgrace to the international community, which sits by watching as tragedies continue to unfold. How can humanity sleep with a clear conscious and not be haunted by the horrifying pictures of the victims. How can the United Nations claim that it is true to the purposes and principles contained in its founding charter when it has failed miserably to meet its responsibilities towards protecting Syrian civilians, and the Assad regime continues to unleash its chemical weapons on civilians without any deterrent. The latest chemical attack on Idlib is a testament to the dysfunctionality of the current world order and that it is well beyond its expiry date. The latest chemical attack on Idlib is also an unequivocal validation of Recep Tayyip Erdoğan's appeal that the world is "Greater than Five." With Russia holding veto privileges, there is no chance that the U.N. Security Council will pass a resolution sanctioning Syria's use of chemical weapons. Assad knows this and has long concluded that he can get away with chemical attacks and has developed a sense of impunity and an utter contempt for human life and peace.

This time around, the international community must put its foot down. The international community must not accept another day of horror in Syria. This time around, the United Nations should rid the Assad regime of its chemical weapons for good. However, destroying Assad's chemical weapons is not enough. He and those who perpetrated the dreadful chemical assault must be put on international trial for crimes against humanity. They must not escape justice. Only then can the United Nations regain any moral and ethical principles it claims to have possessed one day.