The Catholic Church as an invisible part of the acquis communautaire 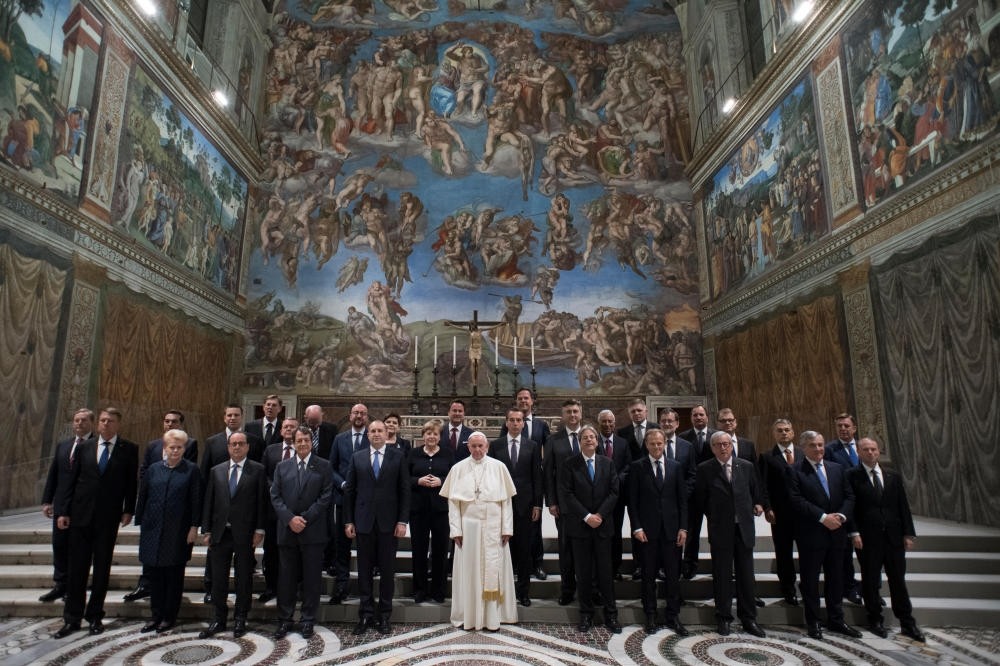 The Vatican remains as the invisible power in the European Union, guiding the decision makers within the organization both politically and spiritually

The Vatican has always been one of the most powerful institutions in the world. Although its authority and influence has been in decline in Europe since the Reformation and other liberalization movements, nowadays it is entering the political arena again. The Protestant nations of Europe, who freed themselves from the oppressive authority of the Catholic Church, have been walking blindly into its dominion.

The Vatican, with its well-organized, successful, and influential structure, still inspires awe around the world. The world admires the Vatican, for instance, for its insistence on the continuity of its successive popes without any criticism. In no other organization can such a commanding head stay in power without challenge. All in all, none of its declarations on doctrinal issues can be questioned by the faithful.

The internal affairs of the Vatican have been so secretive that its followers, let alone outsiders, have not the slightest clue of its details. Even the official members of the Curia have a limited understanding of the structure because of the complex and invested relationships going on inside the Vatican. Its prominent role in international affairs is growing everyday as its wealth increases with its tax-exempt status in the European Union.

Apparently, it is much more than the Peter's Pence (donations or payments made directly to the Catholic Church through the baskets that travel from hand to hand among the congregation inside the churches after Sunday masses) that confer the right to interfere in political affairs. The latest example was the meeting of Pope Francis with all the leaders of the European Union on the eve of the 60th anniversary celebrations of the Treaty of Rome, the charter of the foundation of the bloc on March 24.

The photographs and the speech by the Pope revealed after the meeting gave the impression that, in a time of crisis, political leaders sought comfort from a spiritual head. It was curious because almost none of the individual leaders are particularly known for piety and of course some of them were raised as Protestants. Nonetheless, all of them bowed their heads and listened to the Pope as he told them not to yield to populist policies and advised them to restore peace inside the Union. This meeting between political leaders and a spiritual authority was not the first in history; since the infamous Crusades it has been common.

The Vatican consecrated Europe to Mary several times. The first of these consecrations took place in 1309 and it is believed that since then Europe has been under the patronage of Mary. Among so many different statuses of the Virgin Mary, one portrays her image with 12 stars above her head. The color blue associated with Mary and nobility was used in the European Union flag with twelve stars in a round shape. It may seem a coincidence, but since its inception, the Catholic Church has had the goal of making the Union a Catholic super-state. The latest consecration was made by Pope John Paul II after numerous warnings from the Fátima seers (Aug. 31, 2003). In the Fátima (Portugal) apparitions, the Virgin Mary asked the children to tell the pope to consecrate Europe to her Sacred Heart in 1917. Just before the Bolshevik Revolution she was concerned with Russia and urged the faithful to pray for the Christians in Russia to save them from future persecutions. In this centenary year of the Fátima apparitions, it seems the "Blue Army" of the European Union needs to be united against the "Red Army" of Russia and all other non-Christian nations.

Despite the fact that the Catholic Church has been attempting to interfere in the political affairs of the European Union, its leaders have tried to build a united Europe on secular foundations through legal and economic regulations following the Treaty of Rome in 1957. However, these efforts seem to have failed recently as the German-born Pope Benedict XVI tried to impose a religious element on the European constitution, especially after several meetings with Chancellor Angela Merkel, who is the daughter of a Protestant pastor. Consequently, Merkel's speeches in favor of a religious reference in the European identity of course were welcomed by Catholic countries like Spain, Italy and Portugal.

It could be maintained that the delay in the imminent return of Jesus caused the Church to organize itself to stick to this world more closely. The length of the overdue time and the adjournment of Christ seems to have given the Church hierarchy all the right to rule the world. As long as Jesus Christ the Messiah delays his return, the hierarchy gained worldly powers and economic strength on this earth. However, with this engagement with the world and lack of knowledge on how to avoid its advantages, the Church began to lose its sense of vocation and become another profane institution with secular management. That is why the Roman Church wanted to be a foundation for political entities all over the world; inalienable parts of empires, nation-states, and unions.

The clergy developed several arguments to justify their interference in politics, like the ideas of Catholic social teaching and moral theology. The Church became successful in overcoming attacks on itself. Lacking a physical military power but infiltrating institutions in the remote corners of the world with valuable intelligence coming from the ranks of priests and nuns, and gigantic economic wealth, the Roman Church has been able to strike deals with all kinds of actors all around the world.

CHURCH'S INVOLVEMENT IN POLITICS Even a casual observance of Pope Francis' engagements with politics is sufficient to reach the conclusion that the Vatican is still one of the most powerful organizations in the world. For instance, Pope Francis was invited to address members of the European Parliament in Strasbourg, France, on Tuesday Nov. 25, 2014. In his message to more than 700 MEPs, he described Europe as an "old, infertile and non-vibrant lady" by criticizing its policies on immigrants and unemployment and its outrageous concern with security. Two years later, he received the International Charlemagne Prize of Aachen, Germany, from Marcel Philipp, the Lord Mayor of the German city (May 6, 2016). The prize is awarded to people who have contributed to the unification of Europe. The prize bears the name of the Frankish King Charles the Great (Charlemagne) who was known by his descendants as the "father of Europe." In the award ceremony, Martin Schultz, the president of the European Parliament, Jean-Claude Juncker, the president of the European Commission and Donald Tusk, the president of the European Council, gave short speeches alongside the Pope himself. He told the audience that the Union needed to be more inclusive if it wished to survive the current difficulties. It should also be noted that previous winners of this prize include Winston Churchill, Bill Clinton, Henry A. Kissinger, and Vaclav Havel, but Pope John Paul II received it as an "extraordinary" Charlemagne Prize in 2004.

All of these mutual expectations from the Church and politicians have shown us that Europeans can come together in solidarity at times of dire need, like they have done countless times in history. Yet, one thing remains undisputed: The Roman Catholic Church has been trying to mold Europe into a super-state. If the European Union is considered the United States of Europe, then the Catholic Church would be its official church. Small churches and denominations might vainly continue their struggle to be recognized until they disappear. In the official language of the Roman Catholic Church, the word "Christianity" means only Catholicism, like the casual sentence "the Christian roots of Europe." Notwithstanding the stress Pope Francis put on unity and inclusiveness, official discourse has tried to erase the differences among the branches of Christianity. If they cannot tolerate their relatively small and trivial differences among themselves, how are they expected to accept other religions? The Catholic Church has been unable to provide a model of unity for a diversity of cultural expressions, as it claims to be the official church of all Europe and possibly the entire western world. As long as the Roman Catholic Church claims to be an invisible part of the acquis communautaire, what it has acquired and its expansion into the small corners of the Union cannot be taken away. In other words, only those entities who are willingly submitting themselves to the authority and the spiritual guidance of this organization can find a place under the flag of the EU.