Turkey teaching the West the difference between refugees and guests 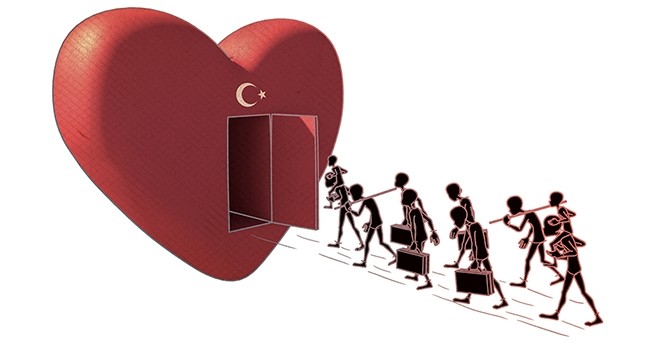 Nizip was not the first time I had been rendered speechless by conditions in a refugee camp. In 2005, I experienced the atrocious conditions endured by internally displaced Palestinians living in slum cities, from Ramallah to Gaza. Two years later, I had the misfortune of visiting Sabra and Shatilla. These the twin hell holes today house 22,000 human beings. Sixty-eight years after the temporary buildings were slung up, a fourth generation of inmates risk electrocution from the cables dangling over stinking fluid that appears at every rainfall.

These (worse than) prison style conditions are endured by hundreds of thousands of Palestinian refugees suffering under the "care" of the United Nations.

The situation for human beings seeking safety and solace in Europe and the United Kingdom is increasingly tenuous and even dangerous. Three weeks, Reker Ahmed, a 17 year old Kurdish Iranian, was at a bus stop in south London, when a passersby asked where he was from.

"They established he was an asylum seeker," say the police. Ahmed was then kicked and punched, by a mob. His face smashed, an eye socket cracked and his spine was fractured. There were bystanders who did nothing but watch the entertainment.

Such attacks do not happen in a vacuum. They are made possible by prime ministerial rhetoric and headlines full of hatred.

In 2015, then Prime Minister David Cameron talked of "swarms" trying to "break into our country."

Then there's Theresa May. As home secretary, she referred to asylum seekers as "foreign criminals." Her stated policy objective has been to create a "hostile environment" for supposedly illegal migrants. She has succeeded instead in creating a hate-filled climate for people in poverty, people of color and people of faith.

HOME TO MILLIONS OF SUFFERING PEOPLEThis week I visited the Nizip facility on the banks of the Birecik dam in Gaziantep province. Here, six years ago, men, women and children began to arrive in nightclothes, carrying their belongings in bundles fleeing nearby Syrian cities including Aleppo, just 30 miles across the border.

Entering the facility, the Turkish official from the Disasters and Emergency Committee (AFAD), showing me around, said, "This is NOT a refugee camp. Don't call it that and kindly do not refer to the brothers and sisters residing here as refugees."

This is the official Ankara line on the status of the ever growing number of displaced people now the economic responsibility of the Turkish government and people. Turkey is now sheltering more than 2.7 million registered Syrian's. It is estimated another 500,000 are attempting to make lives for themselves, beneath the government radar, in cities nationwide.

Unlike European nations, Turkey's leaders have lifted restrictions for new arrivals from war torn nations to enter university and to apply for jobs. Youngsters, are given the option to learn Turkish as soon as they are registered for education.

Within walking distance from the two bed container homes, I was shown through a series of smart classrooms busy with students aged from 16 years old to 60. They were having vocational lessons: Hairdressing, weaving, Jewellery making, fine arts, computing and mosaic. The art work on display was as good as any at my daughter's private school in the U.K. and the equipment was excellent.

Last summer in Ramadan, President Erdoğan and his wife broke their fast at another "Accommodation Center" at Midyat. His speech there explained the exceptional level of care taken by the Turkish authorities of the Syrians - and refugees from other nations including Iraq now making up 3.4 percent of the nation's population.

In the speech attended by United Nations High Commissioner for Refugees António Guterres, Erdoğan effused empathy for the pain of those seeking refuge in Turkey.

He said: "I pray this may be the last Ramadan you observe away from home. You are Muhajirun for us. We, as Ansar, try to take care of our Muhajir brothers with the love, enthusiasm excitement of Medina. In our culture, a guest means prosperity, honor and joy. You have brought prosperity to us. You have honored us with your presence."

This important statement, which makes perfect sense to Muslims, was explained by Emel Topçu and Tuba Duman, associate professor and doctor at the Ankara University, in their 2016 research paper, "Solidarity with Syrian Immigrants with the Power of Islamic Beliefs and Volunteerism."

Topic and Duman found that religiously motivated Turks (they studied women's groups specifically) were motivated to help refugees in an exceptional manner because of an Islamic tradition from the time of Prophet Muhammed.

The monotheism and fairness principles of Islam were revealed in Mecca amidst a devoutly pagan people. As a result, the oppression of the early Muslims was intense. Conditions became so severe the Prophet and his followers sought refuge in the multi-cultural city of Medina.

There, the Muslim minority were welcomed by hosts known as Ansar or (The Helpers) and the refugees from Mecca, as Muhajirun (The Emigrants). The Helpers shared their belongings, made the emigrants business partners, shared their houses, food, clothing and water.

Turkey's government has so far diverted $25 billion of its economy to the effort to spare fellow human beings further pain and humiliation. Other government and international bodies have contributed a measly 600m dollars to assist with this mammoth task.

And it's not rocket science.

If you want refugees to become independent and an economic benefit to the host nation, provide good quality education, vocational training and access to work.

Watching Syrian students playing basketball in a kind of village atmosphere on the banks of a dam (which they can swim in by the way with special safety supervision) it's impossible not to make the comparison between the Turkish approach and the European reaction to the global displacement phenomenon now impacting 65 million people.

In October 2016, Denmark passed a law requiring newly arrived asylum seekers to hand over valuables, including jewelry and gold. Why? To help pay for their stay in the country.

What next gold teeth removed? We must shudder at this reminder of an earlier fascism that reared its head in Europe.

Meanwhile, inspired by presidential words, including the rejection of the term "refugee" for "guest" many of the Turkish public are putting into practice a 1,400-year-old ideal based on compassion.

Erdoğan told Syrian refugees in Kilis, a city hosting more than 120,000 refugees, exceeding its Turkish population, "We regard you as our brothers and sisters. You are not far from your homeland, but only from your homes and your land ... Turkey is also your homeland."

I was stunned by the Nizip Accommodation Center. But, this time it was by a sense of hope rather than despair.