Populism, a temporary wind or a deep-rooted change? 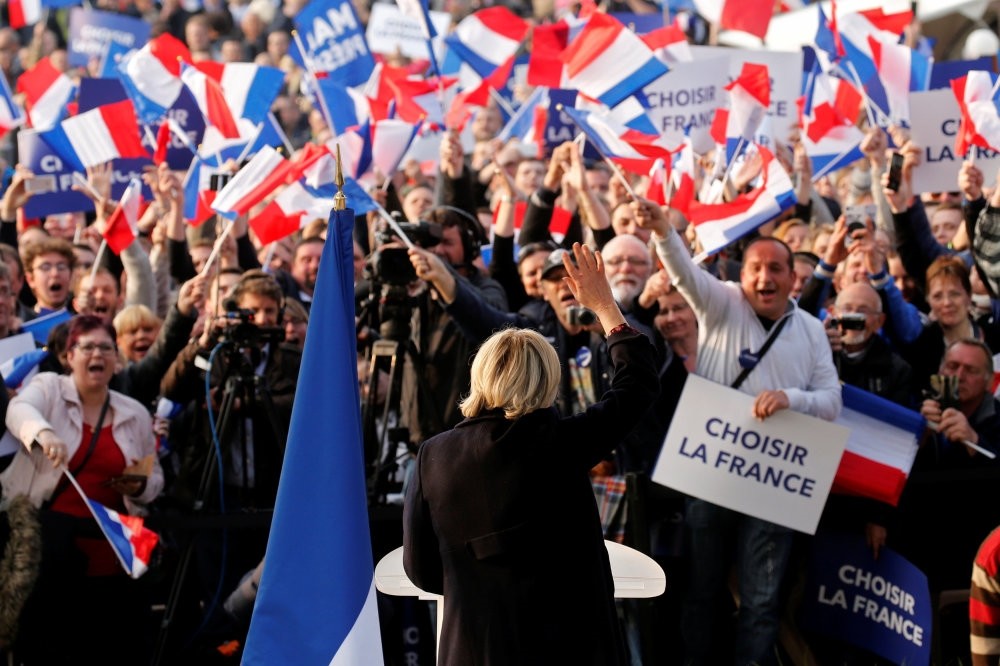 Marine Le Pen, an extremist far-right candidate for the 2017 French presidential election, attending a ,people's party, with supporters in Ennemain, northern France, May 4.
by Karel Valansi May 06, 2017 12:00 am

The populism across the world was first seen as a wind that would come and then blow over, yet unfortunately it has now become a deep-rooted problem, threatening and scaring many

After Brexit in the United Kingdom and Donald Trump's victory in the U.S., the world has been anxiously awaiting European elections where populist names have been resurgent. In many European countries, populist leaders and their political parties/movements are definitely on the rise. We can see this trend in many European countries including France. For the first time in its history, France is going into the second round of the presidential elections without any of its traditional political parties.

Their opponents see populist leaders as demagogues using public discontent for their own benefit. Populism pushes at the edges, for sure. Its main aim is to disturb the established political order. It ignores the political realities and also political compromise to achieve a solution. Its target is to challenge the status quo, upstaging traditional mainstream parties.

Populists are seen as new and brave voices against the traditional ruling elites who are perceived as indifferent to the problems the ordinary people face. Their supporters believe that the system is not working properly, and fails to deliver its promises. There is a serious distrust in political institutions. They think that traditional parties and politicians don't represent them and more importantly don't care about them. It has to be noted that we are witnessing an increase in divisive behavior, polarization in the society, human rights violations and unfair access to education, employment and other economic and social resources that create this feeling.

Economic stagnation and terrorism helped populists make their case. They perceive migration as the main culprit. They clearly otherize refugees, minorities and new comers who are mainly Muslims.

The main issue with populism is that it considers people as homogeneous. It assumes that people think the same and act the same way. It strongly advocates the idea of popular sovereignty above the sovereignty of democratic institutions. As a consequence, the world becomes black and white for them. They don't accept any other opinion but their own due to the fact that they are the majority. Therefore, the minorities are pushed out and marginalized.

For many, the rise of populist leaders is the unavoidable result of capitalism, which generated economic problems rather than remedy them, and also inequality instead of serving the interests of the people. Can we explain the rise of populism with economy? If it is so, we can conclude that fixing the economy will end the rise of this phenomenon. However, even though a good economy would for sure help solve some problems, there will still be groups unhappy with multiculturalism. The problem is not just the economy but at the same time multicultural society and Western identity, culture and values that are perceived to be endangered by newcomers. The xenophobia and Islamophobia are nurtured from this fear.

People fear the change. The change in the demography is not the only one. The technological changes that affect employment opportunities, the globalization, growing inequality, and terrorism that arrived in city centers affecting daily life generate anxiety and fear. There is always a tension between progress and stability. However, progress without any change is not possible and change creates winners but also losers. For the winners, it is easy to ignore the fact that progress can have negative consequences as well. In that respect, people voting for populist leaders want change only if it is for their own advantage. They are trying to avoid the cultural, social and economic changes that may cause fear and discomfort them.

It can be added that so far populism has never been taken so seriously. Some thought of it as a wind that will come and then blow over. However, its reasons and consequences should be debated in order to reach some real answers. It is not a short term abnormality but the result of a deep distrust against the tradition of politics, the role of the institutions and the functioning of the politics that favors some, ignoring the needs and expectations of the masses.

The author is a columnist with Şalom, a weekly Turkish-Jewish newspaper
Last Update: May 07, 2017 11:53 am
RELATED TOPICS