Le Pen has been defeated for now, but not Islamophobia 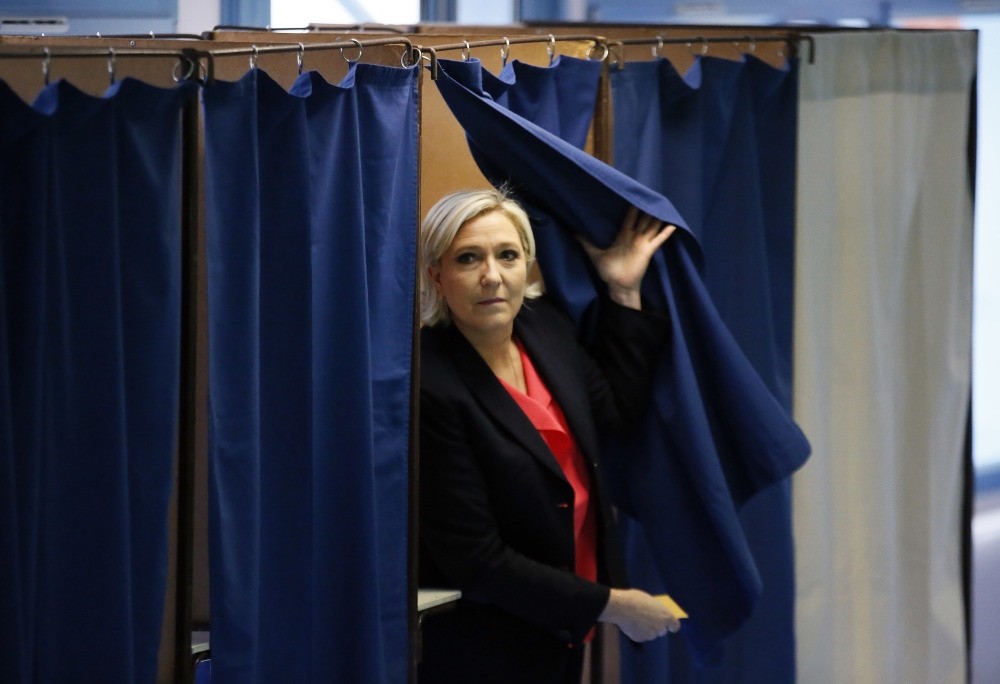 French far-right presidential candidate, Marine Le Pen exiting a voting booth before casting her ballot in Henin Beaumont, May 7.
by Özgür Tomakin May 10, 2017 12:00 am

The defeat of Le Pen does not mean the end of the racist, Islamophobic and xenophobic discourse among the French society. Macron has a lot to do in the following years

In the second round of voting on May 7, the French electorate chose Emmanuel Macron as the new president of France to lead the country for the next five years. His movement, En Marche! (Onwards!), took more than 65 percent of the votes in the second round, which was more than expected in the polls before the election. The results indicate that French people, in general, are against Marine Le Pen and her anti-Islamic and anti-immigrant policies. However, xenophobia and Islamophobia are not the only political problems in France, there are huge social problems. The problems in France are rising faster than in other European countries that are suffering similar issues, and voting against Le Pen did not solve the problem, because she was never the root cause, only a symptom.

We need to discuss the reasons behind Macron's victory and Le Pen's defeat before moving on to France's growing problems. Firstly, in the second round of the election, many French voters abstained from voting, believing that neither candidate was suitable, often dismissing one as "a fascist" and the other as "a banker." In the final days before the second round, protesters took the streets of Paris to say "neither Macron, nor Le Pen." Despite the lesser-of-two-evils choice, the majority of the French people voted for Macron because of their fear of Le Pen, with those from the centrist parties particularly fearing the Front National leader.

After Donald Trump's victory in the U.S., many people in France were scared of repeating the same mistake, which is why the centrist right and left candidates, both Francois Fillon and Benoit Hamon, called on their supporters to get behind Macron in the second round. A total of 65 percent of the French electorate did not vote for Macron on Sunday, instead they voted against Le Pen. Even if the far-left candidate Jean-Luc Melanchon did not support either Macron or Le Pen, some of the far-left voters possibly moved to far-right Le Pen in the second round because both Melanchon and Le Pen called for a "Frexit" referendum. Extremism is extremism either way. In the end, Macron, who has been labelled a populist from the liberal center, won the elections and is now the new president of France.

Macron's victory in the French elections can also be interpreted as a defeat for nationalism and a victory for globalization. Macron's election program pledged to strengthen the EU after Britain's referendum vote last summer. He also has liberal policies like reducing state spending and easing the labor laws. In contrast to him, Le Pen defended nationalist policies such as strong borders and national identities. The election results show that the French people want to stay in the EU, but it does not mean they are satisfied with it.

A poll by the Pew Research Center in June 2016, before Britain's EU referendum, found 61 percent of people in France have an unfavorable view of the EU, while only 33 percent expressed their desire to leave the EU. Now, we cannot predict what will happen after Britain officially leaves the EU, but this trend seems to be moving in the anti-EU direction while the other problems, especially the economic crisis, are deepening day by day. That is why Macron has to resolve France's economic problems and its issues within the EU to ensure that Le Pen does not win in five years' time.

One of Macron's most important promises in the election campaign period was to solve the unemployment issue. Now, the unemployment rate is around 10 percent in France, almost double that of Britain and Germany. Among young people, unemployment is an even bigger problem, with 24 percent of people between the ages of 15 and 24 jobless. That is why solving unemployment will be Macron's main task in his term as president. It will be much harder for Le Pen to achieve victory in 2022 if Macron is able to shed the negative image he gained after working in Hollande's economy ministry and deliver employment to France's young people.

THE IMPORTANCE OF PARLIAMENTARY ELECTIONS

According to polls before the elections, Le Pen had almost no chance of winning against Macron in the second round. However, after she saw the results in the first round, she began preparing for the legislative elections that will be held one month after the second round over two rounds on June 11 and June 18. After her party ensures a good amount of seats in parliament, though she is not expected to win a significant amount, Le Pen is going to wait for the next presidential elections in 2022. By adopting an opposition stance, Le Pen's Front National will possibly increase its power and become stronger in five years.

Also, for effective governance, Macron needs to get the majority of seats in parliament; otherwise he will have to face cohabitation, which means a divided government, much like the one France experienced in 1986 between the Socialist Party leader Francois Mitterrand and center-right under the leadership of Jacques Chirac.

LE PEN IS NOT THE CAUSE, BUT THE RESULT OF XENOPHOBIA

Le Pen's other main pillar in the election campaign was her anti-immigrant policy. Here we need to focus on the fact that Le Pen is not the cause of anti-immigrant discourse and Islamophobia in France. She, like her father, is the result of many years of otherization in France. After the Paris terror attack and the declaration of the state of emergency, Muslims were targeted and Islamophobia spread to all segments of society. Last August, a French restaurateur refused to serve a woman who was wearing a hijab saying, "I don't want people like you here. Get out. All terrorists are Muslims and all Muslims are terrorists."

This is only one example of the tragic incidents that have occurred in France. The Human Rights Watch released a report in 2016, saying, "France has carried out abusive and discriminatory raids and house arrests against Muslims and alienated them under the state of emergency law. The measures have created economic hardship, stigmatized those targeted, and have traumatized children."

Targeting Muslims in France has also encouraged extremism and the alienation of specific groups, driving these people to join terrorist groups like Daesh.

While all this was happening in France, the president was François Hollande, a politician from the center-left, not Le Pen or any other person from the far-right. After this election result, France should stop blaming Le Pen and instead focus on how to handle the problems that created Le Pen and allowed her to get one-third of the French people's votes.

With the Syrian crisis nowhere near its conclusion, and refugees, escaping the war, facing racism and xenophobia in their day-to-day lives, this situation seriously threatens the future of the EU and Muslims living in EU countries, and it may only get worse in the years to come.

Macron has become the youngest French president in its republican history, as French people want to see a change, especially in the economy. Many challenges await him in the first years of his presidency. More importantly, if the new president of France really thinks that Le Pen is a threat to the country's future, he needs to defeat her discourse too and take every measure to put an end to Islamophobia in French society, beginning with ending the state support behind it.