The clock as the slave master's whip 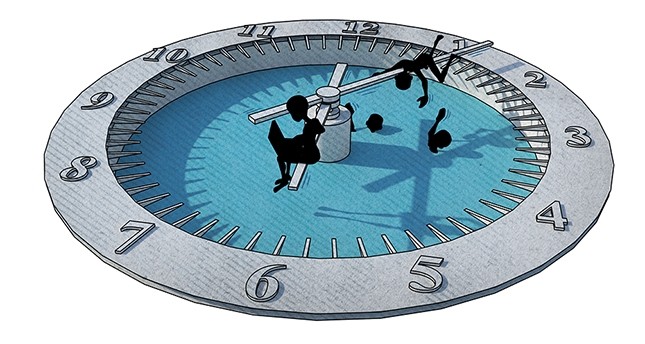 The meaning attributed to the concept of "time" has evolved throughout history, and so has the power of time in its relationship with man. In a way, this relationship has been affected by ideologies that have been defining man, man's affairs and underpinning reasons in these affairs.

Originally, time served as a means for man to organize his life and needs; however, more recently, this has changed significantly. In the current world, the meaning of time and its function is largely shaped by materialistic and modernistic perspectives. This has led to a materialistic and modernistic relationship between man and time with man's significance being largely measured not only by how you use your time but also how much you are able to produce in a set amount of time.

In other words, the quality and productivity of one's time has been the defining factor for the quality of that individual. As a result, man's education around effective time-management strategies is gaining more significance with every passing day. Now, the more a man is flexible and effective in regards to time management, and the more he can squeeze into a short slot of time, the more that individual is preferred.

Here what comes first are the needs of materialism, not the needs of man. But, as a consequence, in the ever-increasingly industrialized world, materialistic pressure on man is growing with every passing day. This pressure affects man's priorities, and there is a growing tendency for man to try to turn him into a commodity; this trend is responding to the materialistic attitude towards man.

This of course impacts all spheres of life, from the value attributed to the elderly to the ever changing marriage age. The growing tendency for marriages to take place at a much later age is partly due to the man bowing to pressures around career and the enforced need to fulfill materialistic dreams. Similarly, the significance of man's body has been timelined and the value of man has been largely associated with the productivity of his body. As the body gets wrinkly and less functional, the significance of man diminishes. But, the situation used to be the complete opposite, in that the elderly were seen as esteemed members of societies, given not only their life experience and knowledge, but also due to simply their advanced ages.

Since time's function has become largely materialistic, the meaning that time attributes to the current, the past and the future has also shifted. In other words, non-materialistic events, beliefs, and ethos of the past, however significant and crucial in the shaping of man's identity so far, are allowed to have very little say on the current or future events. This has led to the past being left in the past and the current and the future, ironically, just waiting to be boxed up in the past.

In a way, this depicts a constant cycle of the recognition and denial of man's significance in the flow of his lifetime, as long as materialistic perspectives continue to govern the concept of time.

Disconnecting man from his past is in a way disconnecting man from his roots and realities. Also, looking at the future only from a materialistic perspective is like constantly curbing man's ability to transfer culture into the future. However, there is a different dimension to the shallowness of the materialistic concept of time, as it allows no room for spirituality, which goes back right to the existence of man and carries into the future and beyond.

By completely focusing on here and now, the materialistic sense of time in a sense totally restricts man's ability to try and grasp the realities that are not fathomable through our immediate senses. Due to a complete lack of appreciation for what metaphysics has been trying to explain, with the ever-estranging sense of time, man is losing his ability to question the meaning of his existence. This being the case, man is losing his uniqueness, which is embedded in his creation.

Unfortunately, the more the contemporary sense of time is instilled in man, the more he is estranged from his natural codes. Man is no longer basing his actions on cultural relativity, rather on materialistic relevance. As a result, even if man's material comfort is there, his spiritual peace is becoming an ever-present issue.

Nowadays, technological inventions and social media are further shaping man's relationship with time. Unfortunately, people of all ages, from infants to the eldest, are developing strong addictions to these inventions and tools, and our complete reliance on them is increasing day by day.

As much as they simplify our lives, these inventions also enslave us, to the point that we struggle to function without them. Designed for complete access to man at all times and for the maximization of his productivity; as well as mass use and mobilization of man as a customer and actor, these tools are further shaping man and societies. In a way, man is getting absorbed in materialistic products and pleasures which are denaturalizing him at full speed.

Having said all this, man's appropriate use of time, as long as this is not only driven from a materialistic perspective, is essential and a significant factor that contributes to man's spiritual and material comfort and peace, especially in a world where human beings are under constant pressure of time.

The way man views what is right and wrong can have a profound impact on whether man is the slave or the master of time. It is clear that the materialistic view of time, which is about constant gain, satisfaction, and leisure, yields materialistic use leading only to materialistic outcomes.

However, a broader and comprehensive view of time, involving its past, current and future traits and knowledge, can help man decide how he wants to utilize time, with much better chances of doing it right.

* Researcher in Media Studies at Westminster University
Last Update: May 17, 2017 1:02 am
RELATED TOPICS