Africa and Turkey at threshold of a lasting partnership 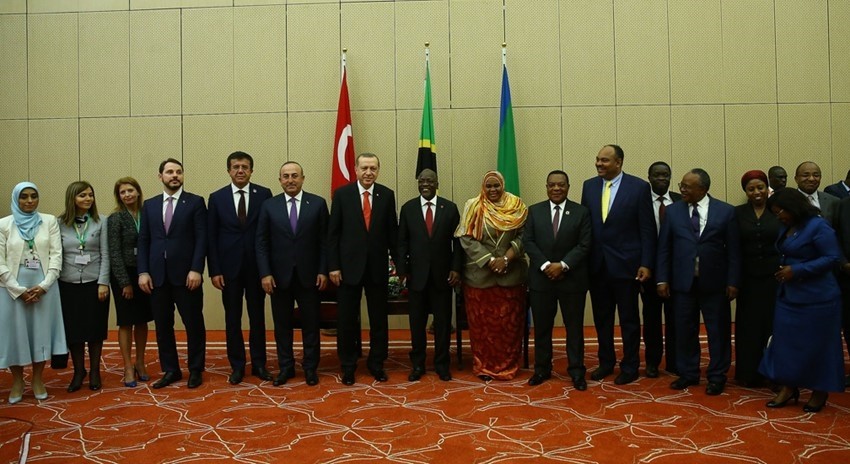 President Erdou011fan and his delegation meet with their Tanzanian counterparts as part of Turkey's official visits to the African countries to increase the Turkish-African cooperation and partnership, earlier this year on Jan 23.
by Mevlüt Çavuşoğlu May 25, 2017 12:00 am

The rising Turkish-African negotiations, based on equality, transparency and sustainability, is a ray of hope for the betterment of further cooperation

Africa is undergoing immense change. The positive transformation is fueled by the hard work, resilience and perseverance of Africans young and old who are determined to turn the page of poverty. We have every reason to believe that Africa's future looks promising. In fact, we can see the positive momentum reflected through reduced geopolitical risks, sustained stability, economic growth, expanding trade, enhanced welfare and better living conditions across the continent. Challenges to peace and security still exist. But they can certainly be overcome.

As we look to the future, Turkey is determined more than ever to extend its cooperation with Africa into new domains. We are seeking to develop mutually beneficial partnerships that will assist in building a solid foundation for relations that are long lasting and productive. Unlike for past colonial powers, history is on our side. On the one hand, there is the human element. Turkey has deep-rooted historical and cultural ties with the continent dating back to the Ottoman Empire. We are also looking to build on the human element by encouraging people-to people contacts. Our national carrier Turkish Airlines recently added Conakry as its 51st destination on the continent. As we facilitate transportation to and from the 32 countries on the continent, we are also promoting interaction of Africans with Turkey and also with the world.

I also wish to underscore the resoluteness of our political will to work with Africa. Our determination is reflected through the strong interest of President Recep Tayyip Erdoğan who attaches the utmost importance to Africa. He not only visits African nations and receives their leaders in Turkey but also encourages businesses, universities, NGOs, research centers and ordinary citizens to engage in mutually empowering relations. He builds mutual trust, confidence and benefit for all so that all issues are addressed in an open and candid manner.

Over the last decade as first prime minister and then as president, President Erdoğan has paid more than 30 visits to 23 African countries in total – a record number of visits for a non-African leader. We have also hosted numerous heads of state from African countries in 2016 and the visits of the heads of state of Ethiopia, Guinea, Sierra Leone and Somalia to Turkey in the first half of the current year, which has continued to provide visibility at home and abroad to our African policy.

I should also underline that our diplomatic presence on the continent is increasing ever rapidly. Today, 39 Turkish embassies operate in different African countries. There is also a considerable increase in the number of African Embassies in Ankara, with the number rising to 33, most recently with the opening of the Tanzanian Embassy.

While we work to advance our bilateral ties with African countries, we are also establishing a sound cooperation mechanism with the African Union. 2008 had a particular significance in the development of our relations with Africa. That year, the African Union declared Turkey a "strategic partner", and the first ever "Turkey-Africa Cooperation Summit" was held in Istanbul. The summit initiated a steady and sustainable collaboration process leading to the second "Turkey – Africa Cooperation Summit" held in Equatorial Guinea in 2014 with the third summit scheduled to take place in Istanbul in 2019. Along with the strengthening and diversification of our bilateral relations with African countries as well as our institutional ties with the African Union, we recently decided to rename our "Opening Policy to Africa" using a more correct concept, namely "Turkey's Africa Partnership Policy."

AFRICAN SOLUTIONS TO AFRICAN PROBLEMS: THE MOTTO OF OUR PARTNERSHIP POLICY

This is not just a catchy word to attract attention to a foreign policy tool. It has substance and clear direction. It involves strong determination on our part and also encompasses our understanding of providing a two-way interaction process. In fact, the motto of our "Africa Partnership Policy" is "African solutions to African problems." We make every effort to promote African ownership in our engagement with our African partners.

What I see as absolutely pertinent for the future of Africa is its sustainable economic development. In this critical moment of change, we feel that Turkey is best suited to share its experiences with the continent and to advance on an economic cooperation model that is based on a "win-win" scenario rather than a zero sum game that produces winners and losers. I should underline that overall, Turkish investments in Africa have recently surpassed $6 billion. These investments are providing much needed jobs, infrastructure, assisting local economies and increasing the exports of final products from Africa to third countries. We are also experiencing a rapid increase in our trade with the continent that reached $16.8 billion in 2016, signifying a four-fold increase in commerce with Africa in comparison to 2003. We are also seeking to contribute to the implementation of the African Union's Agenda 2063 blueprint for economic development by organizing thematic ministerial meetings in areas such as business and agriculture in conjunction with forums that bring together Turkish and African businessmen.

AT THE FOREFRONT OF PROVIDING HUMANITARIAN AND DEVELOPMENT AID TO AFRICA

Turkey is also actively involved in overcoming humanitarian crises in Africa. Our long-term engagement in Somalia since 2011 is an excellent example. We believe that we simply cannot afford to just wait and see as natural or man-made disasters unfold in front of our eyes, devastating hundreds of thousands of people and putting in danger lives of future generations. Take for instance, the recent droughts affecting East Africa. In early March, the Turkish Red Crescent launched a national donation campaign entitled "Be the Hope of Humanity". As a first step of this campaign, the Turkish Red Crescent and the Turkish International Cooperation and Coordination Agency have already begun to deliver much needed aid to Somalia. Nevertheless, it is essential to find lasting solutions to break the vicious circle of droughts and famine. Therefore, as the Summit Chair of Organization of Islamic Countries (OIC), we recently spearheaded an initiative to support drought-ridden East African countries with sustainable projects to be implemented by the OIC.

On July 15, 2016, Turkey was the target of a heinous coup attempt perpetrated by the Gülenist Terror Group (FETÖ), in which 249 of our citizens were brutally murdered and more than 2.000 innocent civilians were wounded. I would like to acknowledge the support and solidarity displayed by our African friends after this attempt against our democracy and basic freedoms. FETÖ has numerous networks in Africa, and poses an imminent threat not only to Turkey, but also for African countries and their current leadership. Several African countries have swiftly and wisely taken action against FETÖ, by either closing or transferring FETÖ-affiliated schools to the Turkish Maarif (Education) Foundation or banning affiliated organizations. We call on all our African friends to follow suit.

In conclusion, I would like to underline that our vision of cooperation with Africa rests on a policy of reciprocal gain based on equality, transparency and sustainability. Through our enterprising and humanitarian policy we are extending our hand to Africa. We are glad to see that our motivation is shared by our African brothers and sisters who possess a vision of a better Africa.