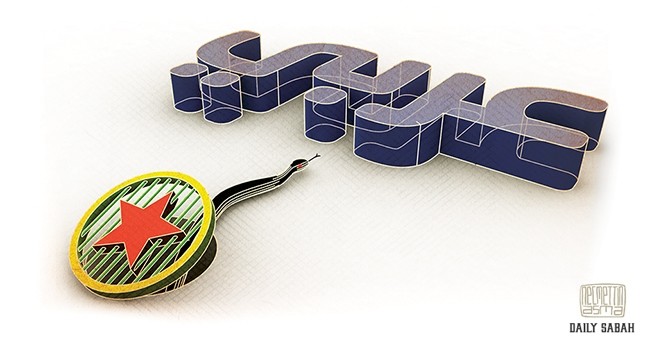 The regional powers' lack of strategies and wrong gameplay helps the YPG/PYD terrorists further their plan to form an autonomous state in Syria. They have already started carrying out an ethnic cleansing policy on the local Arabs

In October 2015, Amnesty International published a 38-page report titled: ''We Had Nowhere Else to Go: Forced Displacement and Demolition in Northern Syria." The report presented horrible testimonies from Arabs and Turkmens being forcibly evicted from their villages. Villagers in northern Syria have repeatedly stated that the terrorist group, the People's Protection Units (YPG) have completely destroyed their houses in front of their eyes.

Shockingly, one of the villagers told Amnesty International that the affiliates of the YPG ordered them to immediately evacuate their land, otherwise, they would inform the U.S.-led coalition that those who refused to comply are collaborators with Daesh and will be targeted.

The report concluded that the crimes of forcibly evicting and displacing indigenous residents of the areas of northern Syria known as Rojava are tantamount to war crimes.

Unsurprisingly, such reports have almost no impact on the American administration's decision to use these militias as their strategic ally in combating Daesh. Washington believes that their competence against Daesh is irrefutable and thus they are indispensable, regardless of any human rights violations.

However, the YPG's ongoing practices matched by complete silence among international powers constituted an imminent threat to the native citizens of the whole region. This has pushed the Arab tribes in the northern swathes of Syria to assemble and urgently mobilize to stop the waves of demographic change in their country. Recently, the leaders of 50 Syrian Arab tribes met in Turkey, and announced they would set up the Army of Al-Jazirah and Euphrates Tribes to cleanse the Euphrates and Al Jazeera areas of Daesh and the YPG terrorists.

In the U.S.-led coalition fight against Daesh, the U.S. Secretary of State Rex Tillerson said, "As a coalition we are not in the business of nation building or reconstruction." Tillerson's proclamation literally reflects Trump's standpoints on "strong man rule." Trump tends to utterly disregard all human rights violations perpetrated by his state and non-state allies in the Middle East as long as they offer him the support and logistical leverage to fight Daesh and create for him a pompous superficial triumph over terror in the Middle East.

In the ongoing battle against Daesh in Iraq's Mosul, America's main ally is not the Iraqi army, it is rather the Popular Mobilization Forces (PMF), numbering more than 100,000 combative well-trained and militarily well-equipped fighters who are effectively engaged in the battle mainly in the western flank of the city at Tal Afar.

The track record of these paramilitary militias is full of human rights violations, including war crimes of torture, arbitrary detention, forcible disappearance and extrajudicial execution of thousands of civilians who have escaped the Daesh-held areas of Tikrit, Baiji, Anbar, Ramadi, and Fallujah.

Iraqi Hezbollah, one of the groups of the umbrella organization PMF, is currently chaired by a U.S.-designated terrorist Abu Mahdi Al-Mohandes, who is ironically covered by the American air support in the battle of Mosul.

Outrageously, instead of exposing their crimes and punishing them, secret meetings were held in Lebanon between 12 leaders of the PMF and representatives of Norway, Spain, the Netherlands, Canada, Australia, Italy and Germany.

It was reported that the German delegation privately told the Iraqi delegation of the PMF that they will be key partners in the governance of Iraq as soon as they're legitimized by any coming elections.

Recently, the Iraqi parliament endorsed a bill recognizing the PMF as a government entity operating alongside the military. The move has widened sectarian animosity in the war-torn country and entirely depleted the already fragile Iraqı military establishment.

BEYOND THE DEFEAT OF DAESH

Likewise, in the looming battle to retake Raqqa, Washington thinks that the Turkey-backed Free Syrian Army (FSA) is incapable of overthrowing Daesh and that the YPG or the Democratic Union Party (PYD) terrorist elements are the best realistic choice.

It is no secret that the Trump administration pledged to equip the terrorist elements and the PKK-affiliated YPG with mortar shells, heat-seeking missiles, heavy machine guns, automatic weapons, heavy automatic weapons, armored vehicles and tanks.

Once the YPG possess such sophisticated ammunition and Daesh is ultimately pushed out of Raqqa, Washington will not preclude a self-governing terrorist state in the northern swathes of Syria. If this happens and the terrorist militias extend their control to the rich petrol wells of the region, the Euphrates as a source of energy and the sea as an outlet to import and export, then a solid federal state is an unavoidable result.

Washington is essentially turning a blind eye to one set of terrorists in order to fight another. That foreshadows calamitous ramifications in the long-term, as we are unfortunately about to observe in the coming months. This provides a glimpse of the dingy destiny of the displaced Syrians if policymakers and regional powers don't rein in the madness of the mounting ethnic and sectarian animosity.

The groups have repeatedly demonstrated their clear intention not only by evicting native inhabitants of the cities they control, but also by changing the Arabic names of Syrian cities into Kurdish names. They have changed the name of Manbij to Mabuk as part of their new strategy to declare autonomy in northern Syria. Once they are enabled, their affiliates will continue to wreak havoc and terror to extend their full control and demographically change the landscape of their controlled areas.

WHAT ARE TURKEY'S OPTIONS?

Turkish troops are reportedly massing across from the border town of Tel Abyad. A move that is perceived as Turkish readiness to take part in the battle of liberating Raqqa. The easiest way for Turkish troops to get to Raqqa is through Tel Abyad after its way through Manbij has been blocked by American and Russian reluctance.

On April 25, Turkey announced its first concurrent, synchronized, main air operation against PKK-linked targets in Iraq and Syria. The Chief of General Staff Hulusi Akar reiterated that operations will not halt as long as the threat prevails. Ostensibly, the assaults were not organized with the U.S.-led coalition.

The unilateral move triggered immeasurable ferocity among American military officials. As an irritated response, the U.S. military deployed its troops along the border in an extraordinary show of solidarity with terrorist YPG/PYD militias.

If Turkey heavily intervenes in the north of Syria, the motivated international media outlets will definitely depict it as a stab in the back of the coalition. They will envisage Turkey defending Daesh and trying to halt the impending obliteration of the extremist group.

On the other hand, a Turkish interference without the Iranian and Russian realignment with Turkey would be military and political suicide mainly because of the lack of international or regional partnership or coverage. Thus, a bolstered American-Turkish strategic relationship is inconceivable, and it is expected to have relatively diverse delineations, with new arrangements of engagement and more representative prospects.