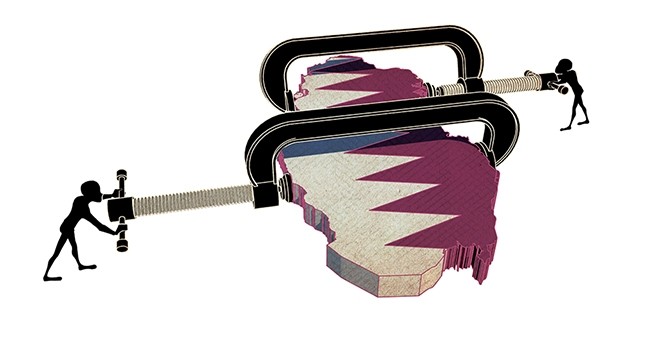 The decision of the leaders of Saudi Arabia, the United Arab Emirates (UAE), Bahrain, Egypt and other countries to isolate Qatar is an important political maneuver that may have region-wide ramifications. This move is predominantly an effort to control and contain the conditions that led to the Arab Spring. Political actors and institutions that gained popular support and power during the Arab Spring gradually lost power, yet the idea and the conditions that facilitated the wave of change within the Middle East and North Africa (MENA) region is still alive. Gulf monarchies are concerned about the replay of another wave of political mobilization that would also destabilize their regimes. The main goal of this recent political maneuver is to completely wipe out the ideological and practical sources of the desire for political change within the MENA region.

The diplomatic pressure on Qatar may be extended to other countries that may have different visions for the future of the region, including Turkey. Turkey stood as an inspiration for the political change for the Arab Spring. Qatar also played an important role by providing some of the instruments and infrastructure, including media, financial support and a safe environment for the development and dissemination of these ideas. For the coalition that isolated Qatar, the Arab Spring was a distraction that prevented the isolation of the regional ambitions of their archenemy, Iran. Iran's regional ambitions and expansionism and the Islamist movements that have a region-wide influence such as the Muslim Brotherhood are the main targets of this effort. The countries in the region that support or even stay neutral to the Muslim Brotherhood and Hamas are considered targets by this coalition.

The isolation of Qatar is being conducted in order to damage the Arab Spring and the conditions that created it. Qatar provided some of the infrastructure that facilitated the political change in the region, but the more specific objective of the Saudi-led effort to isolate Qatar is to force regime change in Qatar, and if that is not possible, to force change within the family of the Qatari emir. And if this is not successful, at least force Qatar to act in line with Saudi and Emirati policies in the region and not contradict Israel's regional vision. U.S. President Donald Trump's recent visit to Saudi Arabia and contacts with Gulf leaders encouraged the isolation of Qatar. It seems that if Qatar is silenced, similar pressures may be extended to other actors, including Turkey, Oman and Kuwait.

HOW WILL THIS EFFECT THE FIGHT AGAINST POLITICAL EXTREMISM?

Discourses on fighting terrorism and fighting extremism are employed in order to secure the political maneuvering against Qatar. Qatar's position is considered a rift in the solidarity and struggle against moderate Islamist groups and against Iran. With this they would also give a clear message to countries such as Turkey that have ties with moderate Islamist groups in the region. If Iran was the priority of the actors that are isolating Qatar, then the target could have been Oman or Kuwait. Those two members of the Gulf Cooperation Council (GCC) have much closer relations with Iran. It seems that for the time being, the main objective of this diplomatic move is to fight against the Muslim Brotherhood and related groups, Hamas and any other local Islamist group.

The isolation of Qatar has nothing to do with fighting terrorism or extremism. Indeed, what the countries that are repressing Qatar are trying to do may lead to more terrorism and extremism in the region than before. They are trying to strangle another wave of political mobilization that would lead to uncontrollable political change and transformation in the region. They are doing nothing to deal with the underlying conditions that facilitated popular dissent in the MENA region. Extremist views and violent extremist groups can gain more ground if the legitimate channels of expressing political dissent are completely sealed. This may lead to a longer period of destabilization in the region.

Income inequality, the humiliation and oppression of the youth and of political dissidents, grievances of disenfranchised people and oppressive political institutions were all factors behind the Arab Spring. Unmet political and economic expectations since the Arab Spring have further increased violent extremism in the region. The real reason behind the Arab Spring was neither Qatar, nor Turkey, nor any other country. The alternatives to the Muslim Brotherhood, Hamas or any other Islamist group are not complete silence, but a more nihilist line of extremism like Daesh. The pressures on Qatar and possible extension to other countries is based on an incorrect analysis.

Talha Köse is Brussels Coordinator and Society and Media Director at SETA Foundation. He is the chair and an associate professor of the Political Science Department at Ibn Haldun University.
Last Update: Jun 09, 2017 1:50 pm
RELATED TOPICS