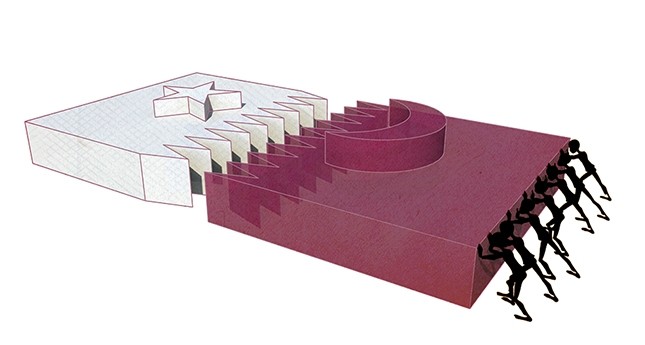 A new Middle East playbook will be written based on the developments of the past few days, including a preamble highlighting extreme polarization and realignment of alleged allies and friends.

Since the outset of the Arab Spring, the entire region has been plagued by the political tumult that divided the Arab world into two flanks: Supporters of the aspirations of the countries experiencing revolutions and conspirators against the uprisings. We have recently seen a clear manifestation of this divergence in the recent diplomatic crisis after Saudi Arabia and six other countries cut relations with Qatar, accusing it of supporting extremism and cozying up to Iran.

Trump tweeted: "During my recent trip to the Middle East I stated that there can no longer be funding of Radical Ideology. Leaders pointed to Qatar - look!" The extent of the slanderous defamation attempts that have been practiced against a country that has been perceived as a strong ally for decades is shocking.

Even more disturbing, it is the first time in history that all diplomatic relations have been cut with an ally country – at 5 a.m. local time – and not only all its diplomats, but also its citizens were asked to immediately leave the countries, followed by an all-inclusive political and economic blockade. In addition, a tight ban on flights, borders and even on food supplies and urging for other states to get onboard and join the boycott.

The spike that inflamed the dust up was is the rising tensions between Qatar and its neighbors after a staged media campaign against Qatari Emir Sheikh Tamim al-Thani. Saudi and Emirati TV channels broadcasted fabricated statements attributed to the Qatari emir. However, a preliminary investigation has confirmed that Qatar's state news agency was hacked. Nevertheless, the media campaign did not halt and continued to treat the fake statements as if they were authentic.

The current crisis will undoubtedly cast dark shadows on the whole region. To put things in context, one needs to consider the real reasons behind such unprecedented measures against Qatar. "Qatar must stop supporting Hamas and the Muslim Brotherhood," Saudi Foreign Minister Adel al-Jubeir said.

Certainly, Iran is not one of the reasons. Oman and the United Arab Emirates (UAE) have stronger relations with Iran and they have not been warned and their diplomatic relations with the other Gulf states remain intact. The new, so-called Sunni coalition needs to gain Israel's credentials. The simplest way to do that is by boycotting the Palestinian resistance in an attempt to completely isolate the Palestinians and impose a regional solution that will liquidate the chronic headache of the Arab world.

A conceivable pending war in the Gaza Strip dictates two inevitable prerequisites: First, cutting all support to the Palestinians from key countries such as Turkey and Qatar and, second, silencing a robust media outlet like Al-Jazeera that will be covering and exposing a war had it erupted. The Arab system of governance has decided that the only way to survive and keep their thrones is by siding with the U.S. administration's orientations regardless of the repercussions.

Like many others, Trump has realized Muslim and Arab countries fundamentally brushed aside his anti-Muslim rhetoric and have focused on their overlapping interests with his new administration. In January, Trump imposed a controversial ban on citizens of seven Muslim-majority countries: Iran, Iraq, Libya, Somalia, Sudan, Syria and Yemen.

The mild tone of criticism from those Muslim and Arab countries was weak or even non-existent. As far as Iran is ostracized, even if just superficially, America's main Arab allies, especially in the GCC, tend to turn a blind eye to not only the controversial ban, but also crimes of the U.S.-led coalition in Mosul.

Paradoxically, Arab leaders who visited Washington extravagantly praised the new president. In several Arab capitals, Trump is perceived as a flexible dealmaker whose engagements could help them clinch deals that fit their interests.

During his recent visit to Saudi Arabia, Trump sent a clear message explicitly indicating that the bonds between Washington and the Arab world had been restored after years of alleged disenchantment with former U.S. President Barack Obama.

Egypt's pro-government media outlets believe that Egypt's period of ostracism was over when Trump pledged unstinting support for Egypt's coup leader, President Abdel-Fattah el-Sissi, who "has done a fantastic job in a very difficult situation." Sissi understood the task that he and his army are entitled to undertake.

Egypt's military is going to be Trump's regional "mercenaries" to combat terrorism. Surprisingly, Daesh intensified its operations in the Sinai Peninsula and the south of Egypt. Recently, the group claimed responsibility for the attacks on Coptic Christians and churches that claimed at least 49 innocent lives. The paradox is that Egypt's backlash was in Libya against rebel groups that are fighting Daesh.

Similarly, Trump called Jordanian King Abdullah II bin al-Hussein "a warrior" and hailed the Jordanian people, who are known for their legendary hospitality. He also extolled their fighting ability, saying: "You, King Abdullah, are a great warrior, and we appreciate it." Recently, the Jordanian king participated in a military exercise with his armed forces, as the country continues to offer its help in combating Daesh. The kingdom is known for its support to the "Southern Front" opposition groups who are backed by the Arab-Western coalition. Trump bets on the courage of the Jordanian king and his people to work more effectively on the southern swathes of Syria.

Therefore, the majority of regional states have unanimously agreed that as far as they rotate in Washington's orbit, they will enjoy international coverage for their autocratic regimes. However, any country that decides to depart from the centric structure of the international order will be punished sooner or later.

Yet, there is an exception to every rule. In a surprising move, Turkey's Parliament has approved legislation allowing its troops to be deployed to a Turkish military base in Qatar in a decision that has been perceived as apparent support for Qatar as it faces diplomatic and trade isolation from its neighbors.

Immediately after the Turkish move, Trump spoke to Qatar's emir, offering U.S. mediation in the crisis by offering to help the parties resolve their differences, including a meeting at the White House if necessary.

President Recep Tayyip Erdoğan, having vehemently criticized the Arab countries' move as unacceptable, staunchly said that ostracizing Qatar and imposing a trade embargo will not resolve any problems and that Ankara will do everything in its power to help end the crisis. Through a proactive move, Turkey has demonstrated how real allies act and practically proved that a friend indeed is a friend in need.