What would save the world from a war? 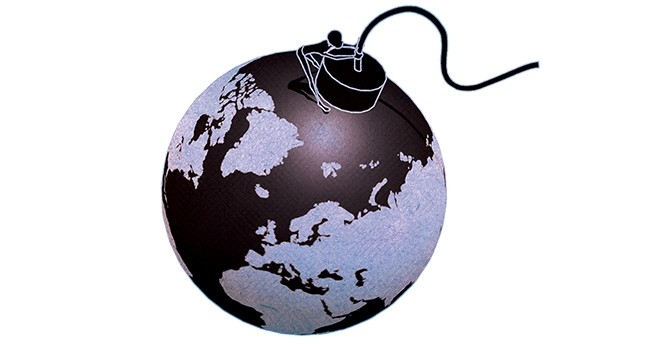 Unless mutual cooperation is formed to overcome the challenges like the Syrian civil war, terrorist attacks, the Palestinian issue and so on, another world war will be at the door

As Prime Minister Binali Yıldırım has recently said, what we least need in the Middle East is a new crisis. With 10 countries at the moment led by Saudi Arabia launching a blockade against Qatar, such a crisis has broken out. Thus, along with the Palestine issue, the Syrian civil war, the Daesh invasion in Iraq and the ongoing conflict in Yemen, the recent Qatar crisis in the Gulf, which has the potential to evolve into a dangerous process, now afflicts the same region as well.

There are serious problems across many parts of the world now. But tensions are high especially in three specific regions. Of course, the first is the Middle East. The other two regions are Russia's western border due to the Ukrainian crisis and the fault line comprising North Korea and the South China Sea. Actually, the main actors of conflict in all three regions are the same. The U.S. and Russia top the list.

The possibility of a third world war outbreak, which no one with a sane mind would ever want, seems to be concentrated on these three potential lines. The world order shaped by the victors of World War II has entered an unstable phase with the collapse of the USSR, the advent of globalization, the information revolution, of Industry 4.0, advances in informatics and particularly with the erosion of monopoly over information.

The use of terrorist groups in the competition and struggle for dominance among countries was also observed during Cold War. What we have seen recently, however, is the institutionalization of that dirty tactic through proxy wars.

Terrorist groups find ideal breeding grounds in afflicted and unstable regions. In these areas where people live a miserable life in precarious conditions, sectarian, ethnic, or class-based problems either turn into actual conflict or pave the way for terrorist groups. Relative stability in some countries has been made possible through repression by an oppressive regime, as in Syria under Bashar Assad in the recent past. But the Arab Spring seems to have brought even that "relative" stability to an end.

In short, countries with a fragile democracy or economy have either slid into civil war or are about to meet the same fate at any moment. Apparently, most of the countries in these regions are former colonies. So, Western nations are under a definite obligation to behave responsibly for enabling democracy and stability in these countries.

However, that duty is not performed. As if that is not bad enough in itself, there is an obvious effort to designate "good" and "bad" terrorist organizations and legitimize the "good" ones.

WHAT THEN IS TERRORISM?

The U.S. conducting the Raqqa operation together with the People's Protection Units (YPG), the outlawed PKK's Syrian offshoot, and providing arms to them, together with a patronizing attitude toward this group held by Western nations, constitutes an example. Meanwhile, Qatar faces a blockade for allegedly supporting terrorist groups.

This is just the pinnacle of cynicism. We no longer have a common definition of terrorism and this means a huge risk for the whole world. When you work with terrorist groups, you cannot predict what goals and targets these groups will pursue over time, and what forces will come to control them. Indeed, the support given to radical groups during the Soviet invasion of Afghanistan resulted in the Sept. 11 attacks. The resulting quagmire has become a breeding ground for many destructive groups like al-Qaida and Daesh.

We don't live in a rose garden. The struggle for controlling limited resources of the world and for territorial domination is a permanent and fundamental dynamic. Throughout history, especially since the Industrial Revolution, this struggle has continued in line with the principle of "divide and rule" and "invade." The Middle East, for its oil and natural gas reserves, and regions like Africa, for their rich natural resources, have suffered much bloodshed and colonization, and have been controlled from afar after the end of the colonial era.

Today, we are passing through a quite different and striking stage of that struggle. On the other hand, along with this dismal story, humanity also has a bright record of democracy and scientific progress.

What's difficult is to radically alter this struggle for resources through democratic values and human virtues. Will the struggle for dominance be pursued by plotting coups in weak or targeted countries, by instigating proxy wars via sectarian and ethnic conflicts and terrorist groups, or is it possible to craft a more reasonable framework?

It is definitely possible. Agreeing on a common definition of terrorism, bringing peace to unstable countries and regions in accordance with a win-win formula, establishing a more equitable international system and developing a new approach toward the Middle East would allow us to address the root causes of problems and eventually solve them.

However, countries, and especially stronger ones, do not follow such a course unless forced to do so or gain advantages. Historical experience shows that crises accumulate to produce conditions for a great war. The ideal of a European Union had been cherished for several centuries in the continent, but it became possible only after Europe lived through the infamy of two world wars.

Nowadays, the Qatar crisis evokes memories of the assassination of Archduke Ferdinand, which triggered World War I. But that assassination was only the culmination of a series of events.

Conditions for that war emerged one by one and led people to believe that war was the only solution.

Since we know that a third world war would bring total annihilation, can we not have the common sense to stop this process in a cool manner? Have we become pawns in a game, the scenario and the end of which are already known? Do we not have anything left, apart from watching the world destroy itself?

I am not such a pessimist. I speak of all these things in order to describe the impasse that the current situation will push us into, and to explain why the prevailing prejudice of "there's no other course possible" is a misconception. Still, the risk is huge. The current course of events portends ill.

We have entered a period in which the world cannot tolerate the democracy deficit, unfair income distribution and the burden of terrorist groups any longer. There is no positive future awaiting the world unless we resolve the root causes of problems, with refugee problems and terrorist organizations coming first. Reconciling this understanding with national interests of countries and their competitive rivalry is the biggest task that lies before us.

The greatest responsibility falls on the biggest, strongest and wealthiest countries. We are ultimately open to the effects of everything that happens in the world, which has turned into a small village. We need to work on fashioning a new global order that is more rational, if not ethical, because of these effects, that is based on softer truths. We have the experience, resources and knowledge required for this effort. In short, we will be completely responsible for what befalls us.

How would we react if our planet was confronted with an extraterrestrial menace? We would probably leave all the problems aside and join forces against that menace. Ethnic, religious, geographic, economic and ideological divides would become meaningless and we would realize that we are equal members of the great family of humanity.

So, what else do we need at the moment to preempt in the face of this huge risk that threatens the world? Is not the menace taken seriously? Or is there a failure to mobilize the will of the people? I think both of them are true. I hope these questions would not remain just an intellectual inquiry but will appear more frequently on the global agenda. And I hope we will achieve this without having to pay a heavy price.