Kurdish independence: Breaking an Iraq that was never whole to start with? 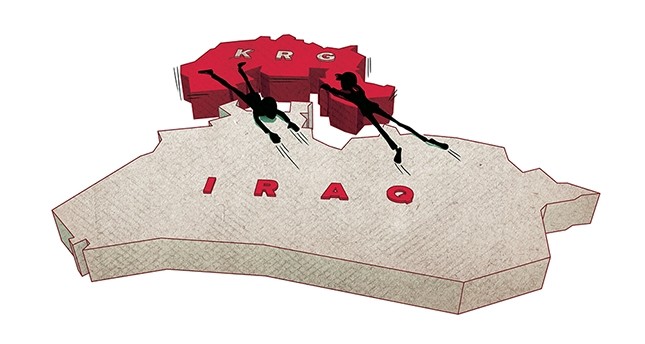 The Middle East is in turmoil because of imperial coercion that resulted in arbitrary borders, and can only be resolved through addressing this root cause

Over the last 100 years following the Sykes-Picot agreement that divided the Middle East, the imperialist pact has become somewhat unbreakable, even though the out-dated agreement doesn't reflect any real socio-political realities on the ground. The Kurdistan Regional Government's (KRG) recent referendum decision has fueled a series of questions and hot debates in the region and is being discussed in a pendulum either one-Iraq policy or Kurds' willingness for the independence.

The Kurdistan region's aspiration for statehood is hardly a secret, yet it has faced growing opposition to this motion from a number of sides, especially, since an independence referendum was set for Sept. 25 of this year.

Turkey warned that the decision to hold a referendum was "a grave mistake," while underlining that "the aforementioned undertaking would lead to negative results and escalate instability during this time as critical developments unfold in the region."

Meanwhile, Washington issued a statement stating that they "understand and appreciate the legitimate aspirations of the people of Iraqi Kurdistan," before adding that "the United States supports a unified, federal, stable and democratic Iraq."

This itself is where contradictions arise for the Kurds. Their rights are deemed legitimate by many sides, but at the same time, there are attempts to prevent the implementation of this right.

KRG President Masoud Barzani expressed hope that the decision to hold an independence referendum would inspire unity. Barzani, who emphasized the desire to achieve independence in a peaceful way, stated "we want to have the best relations and understanding in this regard with Baghdad, neighboring countries, and regional countries."

The Kurds have insisted on claiming that this referendum would not trigger automatic independence, but would strengthen their hand in negotiations with Baghdad to achieve this objective.

The opposition stems from the obsession of regional and global powers of a united Iraq and maintaining its territorial integrity. The "one-Iraq" policy, particularly that of the U.S., leaves the Kurds, the best U.S. allies in Iraq, the greatest losers as they are effectively treated as a subsidiary of Baghdad.

The notion of a united Iraq lacks basis. The Kurds are accused of breaking Iraq, but for the Kurds, they claim, it is a case that you can't break something that was not whole to start with.

From the perspective of the Kurds they believe, they have been effectively punished twice - once by imperial powers through forced incorporation in an artificial state, and then by successive regimes as second class citizens. This treatment has led to campaigns of genocide, destruction of villages and even chemical bombings.

One argument from the EU and the U.S. for Kosovar independence was that it was a "special case," since Serbia's brutal campaign had forfeited their right to govern Kosovo by "breaching its responsibility to protect" its civilians under international law.

Is it really similar for the Kurds in Iraq?

The fall of Saddam Hussein was intended to usher a new pluralistic, inclusive and federal Iraq. Yet, it is difficult to argue anything near this has been achieved since 2003. The U.S. poured over a trillion dollars and scarified thousands of U.S. lives, acting as the crutches of a broken Iraq.

Waves of sectarian violence have engulfed Iraq resulting in thousands of deaths, daily violence and an ever-growing ethno-sectarian divide.

The security vacuum after Daesh, and indeed the rise of Daesh itself in Iraq, could have been avoided, had Baghdad pursued a policy of reconciliation with marginalized sectarian extremists.

While Iraq has gone from one crisis to another, the Kurdistan region has seen unparalleled development and prosperity, becoming a beacon of light in the tumultuous Middle East, has established trade ties with Turkey, and the Kurds did not want to become by-standers in the Iraqi turmoil.

While Iraqi forces quickly wilted away as Daesh took swathes of territory, the Kurds stemmed the tide, left with little choice but to front the battle against Daesh.

For the Kurds, the Daesh crisis was the final straw on the back of years of a lack of budget payments, equal partner status, and implementation of constitutional articles, as well as continuous marginalization policies.

The Kurds are being accused of fueling instability by pursuing after independence, and are warned of not taking such steps while the Middle East is currently in turmoil. However, Kurds believe that perfect moment for them is a fictitious concept while Middle East is in constant crisis and turmoil.

The Middle East is in turmoil because of imperial coercion that resulted in arbitrary borders, and can only be resolved through addressing this root cause.

The KRG's decision for a referendum for an independent, pro-Western and secular Kurdistan would be seen as an afford for stability in a volatile region. Still, KRG officials constantly claimed that Turkey and the new Kurdistan will become vital partners, not a threat to each other.

With a rising strategic standing, strong economic foundations from vast oil resources and all the trappings of a state, the motivation for a referendum is that Kurds believe they are in a unique historical juncture to write their own destiny, and put aside decades of repression. The Kurds are no less worthy and deserve no different than any nation in the Middle East.