Why should we care about the siege of Qatar? 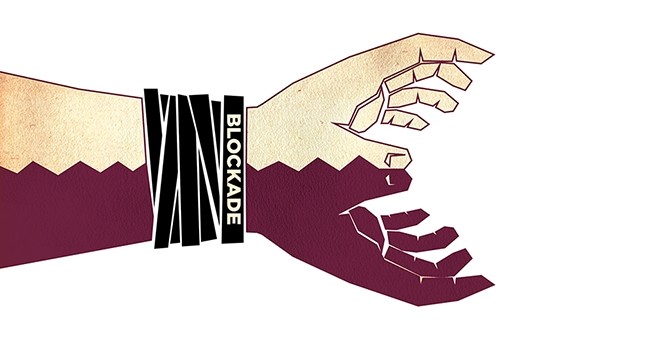 In terms of Islamic mercy and respect for the Quranic imperatives to bring peace in Ramadan and to work as allies with believers, Saudi and its satellite states surely need to repent

Ramadan 1438 will go down in history as the sacred month in which Muslim leaders enforced a boycott upon 300,000 fellow believers.

The impact of the Gulf Cooperation Council (GCC) severing ties with Qatar may say more about the parlous state of our ummah than the occupation of our lands by Israel or the mass murder and expulsion by the brutal regime in Damascus.

The reasons for the blockade are, at a distance, flimsy. Is the catchall excuse of Doha backing "terrorism" enough to unite Khaleeji states in a way that Assad's campaign of mass murder has failed to achieve in six years.

What of the wider ummah response to a crisis effecting food imports, economic ties and air space for the tiny desert state, which has for years punched above its weight in wealth, charity and political assertiveness on behalf of the Palestinians.

According to one former Al Jazeera employee, the response has been an almost universal lifting of the shoulders, a shrug.

Roshan Salih is editor of the UK Muslim News site 5 Pillars and author of a newly released memoir: "Confessions of a Muslim Journalist." Seven days into the blockade of Qatar's land, sea and air by Bahrain, Saudi Arabia and the United Arab Emirates (UAE) he wrote:

"I must admit that I'm struggling to get worked up by this GCC dispute. Is there any evidence of real human suffering because of the siege of Qatar? A stupendously rich petro dollar state has a little less influence now, that's all."

He goes on to say, "It seems to me that this is essentially a battle between pro-West tribal oligarchs, with Saudi the biggest oligarch on the block trying to make the little oligarch fall into line."

He has a point.

For decades, viral videos of Gulf billionaires behaving like giant, obese toddlers have circulated, putting the shameful extremes of wealth on display. Gorging at vast feasts, buying gold toilet seats and fluttering wads of cash onto the clavicles of buxom belly dancers have hardened hearts towards Gulf Arabs. These stereotypes now stand between Qatari civilians facing family separation and what must and should be fury at what is taking place.

In the same way that sympathy fatigue has been a trial for the dying in Rohingya, Aleppo and Sana'a, so a sense of the Muslim Worlds self-loathing is the enemy of the Qataris now.

This is a deep sickness, a mutual distrust that benefits Washington and Tel Aviv agendas; both are background players in this new siege of a Muslim population.

Amongst the political mayhem, real lives are affected, uprooted and dramatically altered with a brutal suddenness, leaving families shell shocked.

Wednesday, I received a phone call from a close friend in Doha. He has asked for his identity not to be revealed, so I shall call him Yusuf. He was almost incoherent with distress for his heavily pregnant sister as a result of the 14-day removal order applied to Qatari nationals in Saudi Arabia.

Baraka Al Marri is a mother of eight, including 5-year-old twin boys. For the past 15 years she and her husband Saleh lived and educated their children in Saudi Arabia. On Monday, ahead of the final Saudi expulsion date, they packed what they could into a car and headed with their youngest children towards the Qatari border.

At the border their passports were found to be out of date, so they were told: "Sort this out in Riyadh" by the authorities. Back at the Saudi border they were turned away for being Qatari.

The family was in no man's land, a diplomatic minefield, where human rights and mercy do not exist. They had nowhere to go and no papers. They had become stateless.

United Nations High Commissioner for Human Rights (UNHCHR) Zeid Ra'ad al Hussein has voiced concern over the potential impact on the human rights of civilians as a result of the severed ties.

"I am alarmed about the possible impact on many people's human rights in the wake of the decision by Saudi Arabia, the UAE, Egypt and Bahrain to cut diplomatic and economic ties with Qatar," Zeid said in a statement.

Hundreds of mixed-citizenship Qatari couples are facing the real prospect of being split from their families.

The National Human Rights Committee in Qatar (NHRC) has released a report focusing on the impact the separation of previously good "connections among the region's people and nations on every social, economic, cultural, civilian level" is having on real people caught up in the diplomatic row.

According to data, some 11,387 citizens from the three blockading states live in Qatar, while approximately 1,927 Qatari citizens live in those states.

All of those people have been affected in different areas and sectors, such as business and education, to some degree. The NHRC has already logged 784 complaints related to the impact on human rights since the boycott began.

According to official figures, there are 8,254 Saudi residents, 784 Emirati residents and 2,349 Bahraini residents living in Qatar.

Mrs. N.H. is 28 years old and Saudi born. She visited NHRC headquarters detailing her case: "On June 8, Saudi authorities demanded I go back to Saudi Arabia without my children. I can't leave my children alone in Qatar, but I am afraid arbitrary actions will be taken against me if I didn't comply."

As all these cases of personal confusion were being brought to the NHRC, Baraka Al Marri and her children, were forced to sleep in the open on the desert floor.

Their case quickly became a local cause on social media. They had no water, no food. The twins had left home in nightclothes. In 45-degree desert heat, Baraka's 8-year-old son, who has a long-standing medical condition, became extremely ill. On the phone, Yusuf told me in shock his nephew was being airlifted to a hospital in Qatar. Shockingly, the mother and his siblings were left in the desert for "having no papers."

Yusuf said: "It is as if everyone has gone mad. The people in power, those I know personally, they are acting crazy, shouting, saying, 'it's not our problem!' What is happening?"

It seemed like this rich-on-rich siege would claim a child martyr.

Within this shameful mess, Turkey has been a voice of support for the besieged Qataris. At a fast-breaking meal, President Recep Tayyip Erdoğan gave ruling Justice and Development Party (AK Party) members a message to deliver to the Saudi administration as Parliament rapidly approved legislation to deploy Turkish troops in Qatar:

"You especially should work for brotherhood, not animosity. You have to work to bring brothers together. This is what we expect from Saudi, the Custodian of the Holy Mosques."

Back in Qatar, common sense, and hopefully a sense of shame, finally prevailed. After 48 hours of heat exhaustion in the desert, the Al Marri family was reunited in Doha. The sick child is recovering, and paperwork is being gone through that should allow them to renew their Qatari passports and citizenship.

Meanwhile, in terms of Islamic mercy and respect for the Quranic imperatives to bring peace in Ramadan and to work as allies with believers, Saudi and its satellite states surely need to repent. The wider ummah long ago lost respect for their leaders. This could be the nail in the coffin.