Is Trump a Middle East expert or a politically ignorant president? 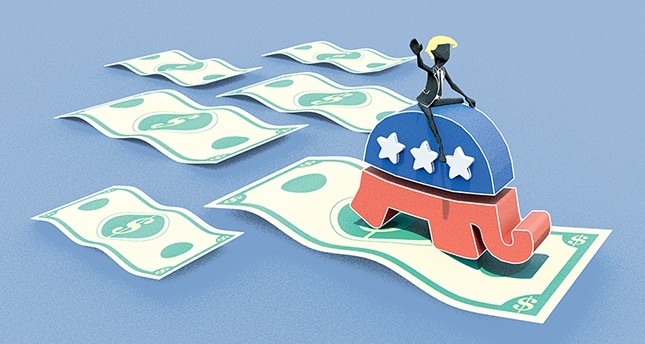 The idea of a billionaire bussinesman president sounded good for the Americans and they accordingly voted for Trump in the last elections. Yet, his ignorance in politics now makes them feel sorry

When Mike Pence, the U.S. vice president, was asked about President Donald Trump, he reflected for over a minute before proclaiming that Trump is a "businessman, not a career politician". Trump is the only president whose primary professional qualification is having worked as a CEO.

The exceptionality of the American style of governance has always been a source of bewilderment. One of the most consistent tropes of conventional political pomposity in America is that businessmen do it better. This belief insists that private ventures are the origin of all political wisdom, whether that means denationalizing state-run enterprises, outsourcing capacities to gluttonous corporations or, above all, appointing only business leaders to executive positons.

American voters decided that Trump would become the CEO of American after he promised to reimburse the U.S. treasury with the fortunes of Gulf countries that have been defended and protected by the mighty U.S. military for free.

Unlike his forebears, as a businessman, Trump tends to promote the idea that he is the only one who is fully and exclusively aware of the dynamics of Middle Eastern markets. He observed how almost all Muslim and Arab countries have fundamentally brushed aside his anti-Muslim rhetoric and focused on their overlapping interests with his new administration.In January, Trump imposed a controversial travel ban on residents of six Muslim-majority countries: Iran, Libya, Somalia, Sudan, Syria and Yemen. The mild tone of criticism coming from Arab countries was weak or even nonexistent. Trump has even been received in Saudi Arabia as a conqueror and guardian of the Muslim world. He went back to Washington generously reimbursed with business agreements and lots of "jobs, jobs, and jobs".

For the naive Arab countries, as far as Iran is considered an outcast and a pariah, even if just superficially, America's main Arab allies, especially in Gulf Cooperation Council (GCC) countries, tend to turn a complete blind eye not only to the controversial ban, but also to crimes of the U.S.-led coalition in Iraq and Syria.

Paradoxically, in several Arab capitals, Trump is perceived as a flexible negotiator and dealmaker whose engagements could help them clinch deals that fit their long-term interests.

In management literature, CEOs unanimously agree that everything is negotiable. It is one of those business riddles that every business figure knows but never divulges. The first most remarkable negotiation tactic of an adroit CEO is to make everyone else look lousy.Trump has literally implemented this business tactic with his predecessor, President Barack Obama. There is no doubt that Obama's eight years in the Oval Office paved the road for the rise of Trump. Although publically Obama is believed to have increasing favorability among Americans, his non-interventionist foreign policies were behind Americans' inclination toward Trump's populist rhetoric.

There is no doubt that Obama's legacy, particularly in the Middle East, constituted a major vexatious challenge to the new president as a negotiator. When Trump entered the Oval Office, he found an in-tray bulging with urgent issues.

It was believed that Obama's legacy would push Trump toward a more cautious interventionist policy in the Middle East and much concentration on the internal economic welfare of American society. However, his recent moves of increasing the military budget and deploying more aircraft carriers in the Middle East and Asia indicate that he is approaching former President George W. Bush's reckless style, not former President Bill Clinton's economic approach

Bush once said: "Every nation, in every region, now has a decision to make. Either you are with us, or you are with the terrorists." Now, Trump thinks that Qatar, which had played a major role in brokering talks and negotiations between the U.S. and the Afghan Taliban, is funding terrorists and should stop doing so.

Saudi Arabia and the United Arab Emirates (UAE) believe that Trump's political and indefinite fluidity will present them with a great opportunity to attain their regional ambition to silence every opposing voice such as Qatar and its vocal TV channel, Al-Jazeera.

Trump's irrationality will lead to deadlocks not only by driving wedges between allies, but also by leaving no choice for other competing regional powers but to disregard mutual differences to face the lunacy of an immature CEO-president whose policies are basically primed for tearing up the whole region.

U.S. Secretary of State Rex Tillerson is reportedly exhausted from the job of cleaning up after every diplomatic blunder perpetrated by his executive manager almost daily.

Tillerson was seemingly annoyed the last time Trump damaged his diplomatic efforts to resolve the GCC spat. Tillerson's team has excoriated the media for covering Trump's tweets that were primarily controverting the secretary of state's call to ease the embargo imposed on Qatar by other Arab nations. Trump's outspoken tweets accusing Qatar of funding terrorism "at a very high level" does not serve even the interests of their 10,000 military personnel based at the U.S. military base in Qatar.

Qatar's problem is not funding extremism or aligning with Iran or even supporting political movements such as Hamas and the Muslim Brotherhood. Qatar's main problem is its insistence on having its sovereign and independent decisions based on its own national interests, not on the deficits of the U.S. Treasury or vicious Saudi and Emirati ambitions.

Trump is undisputedly the richest American president ever, totally lacking any political experience, yet he managed to win his first election ever to become president of the mightiest power in the world. He is the first U.S. president who has never held elected office nor served in the military. Instead, he relentlessly solicits his business intelligence as an over qualification for being president.

Will Trump's overconfidence, or rather egotism, eventually lead to an absolute disaster or an elusive success story of an atrocious CEO whose business predispositions calamitously do not fit the office of president?