July 15: Looking back a year later 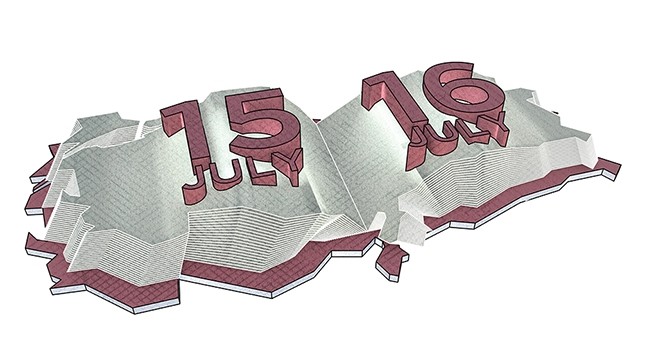 A year ago on July 15, FETÖ tried to stage a deadly coup and was repelled by Turkish people who flocked to the streets to protect their country

We are commemorating the first anniversary of the July 15 coup attempt. Over the last year, that coup attempt has always remained on the agenda because of both the trauma it caused and the prosecution of Gülenist Terror Group (FETÖ) members who were involved in the coup or infiltrated into the state institutions. However, July 15 is not known only for that, it has also been discussed by those who tried to play it down or cause it to be forgotten. It can be predicted that this trend will go on for a long time to come.

As it sealed Turkey's future, the night of July 15-16 left its mark in the history of the country, the region and the world. Turkey is a very important country and what happens in this country has the potential to affect global politics as well. Perhaps for this reason, we see a lot of domestic and foreign actors involved in Turkey's coup-ridden history. Once again, the issue appears to be that of keeping Turkey in line and controlling it with all its potential. Actually, all power struggles in the world always include such tendencies and moves.

The history of Turkey, the process leading to the disintegration of the Ottoman Empire and the establishment period of the Republic of Turkey, contain many anomalies. During the period of decline, what great power Ottoman sultans were close to mattered a lot. The alliances that Unionists formed and the foreign power centers with which they cooperated in the toppling of Sultan Abdülhamid II, played various roles through moves intended to control the country. The consequences of these moves were obvious. Six years after the toppling of Abdülhamid II, the Ottoman Empire joined an imperialist war as the foot soldiers for Germany, which led to the empire's eventual dissolution.

The young Republic, especially within the post-World War II order, aligned with the Western bloc. But what choices it would make in the areas of foreign policy and economy and what governing powers would undertake these choices were important. The embargoes that Turkey faced in the wake of the Cyprus Peace Operation showed that any government stepping out of the defined boundaries would draw wrath. Political leaders trying to govern and develop the country with a national understanding have somehow suffered coups and interventions. It was as if a hidden hand was determined to not let the country mobilize its resources and develop authentic policies.

It was inexplicable that a country like Turkey, which has huge potential and wide resources, had suffered such deprivation during the past 80 years. Yes, Turkey has no oil or natural gas reserves, but it is also located at the confluence of crucial energy corridors. The reason for such deprivation in a country with a young population and fertile lands abutting three seas should be bad governance at most. However, politicians trying to correct that by launching various efforts had been thwarted through coups or suspicious incidents.

This short look at history is necessary to better understand the events that led Turkey to the coup attempt on July 15-16. Turkey has been on an ascent during the past 15 years, which is simultaneously met with admiration and anger. Just 15 years ago, it was a country that failed to collect the garbage on the streets, barely paid pitiably low retirement pensions, lacked a relevant foreign policy, with social unrest peaking and with a middle class that shrank to a mere 10 percent. It spent TL 86 for every TL 100 it collected as government revenues on borrowing costs inflated its debt stock with the highest borrowing rate on earth since it could not do anything with the rest after debt payments. So, it hit the wall with the outbreak of the 2001 economic crisis.

We see that a dramatic change in this picture has taken place during the past 15 years. Currently, only 14 out of every TL 100 collected go to interest payments and the country has made a healthcare reform that is the envy of the world. It shields itself from a covert arms embargo thanks to the domestic production rate it achieved in its defense industry. The size of the middle class has reached some 40 percent. People with low incomes who died at the gates of hospitals yesterday enjoy the luxury of car ownership and buying homes with low and long-term payment schedules today. Public debt is at an enviably low level. Despite all the problems faced during the last five years, growth stands at around 5 percent, making Turkey the third-fastest growing country after China and India. In recent months, industrial production, exports, unemployment rates and inflation figures have been on a positive course.

And Turkey achieves all this in spite of civil wars in its southern neighbors Syria and Iraq, coup attempts and numerous terrorist groups launching concerted attacks at home. For a country that faced the bloodiest coup attempt ever in its history just last year, such performance is exemplary. Of course, citizens' alertness to every kind of provocation, their insistence on protecting social peace and, most importantly, thwarting the July 15 coup attempt should be appreciated.

The process of an invasion attempt that began with the Gezi Park protests, continued with the FETÖ judicial coup attempt on Dec. 17-25 through its elements in the police and the judiciary and supported by the PKK's uprising attempt on Oct. 6-7, 2014, and the final attempt to deal a decisive blow after the failure of all these initiatives was intended to thwart Turkey's ascent.

If a coup had been accomplished in some way through the interventions before July 15, it might have been limited to a change at the top like in the Feb. 28 coup. Naturally, the government installed after a coup would have put Turkey back on the course drawn by the forces behind the coup mechanism. We can deduce this from the processes being experienced in Egypt and Brazil. What these countries are living through now is obvious. They are also just at the beginning of a long process.

When the mission could not be accomplished through the easier way, an extreme and evil course was taken with the purpose of turning Turkey not into Egypt, but Syria. Perhaps Turkey would have undergone a necessary partition and designs after a civil war going on for some years. Whether through soft or hard methods, however, the country would have found itself in the same situation after a decade.

That was the plot the people and President Recep Tayyip Erdoğan foiled on July 15-16. Indeed, a country that would have seen its future blurred if the coup had succeeded launched the most successful operation in Syria so far: Operation Euphrates Shield, a month after the coup attempt and concluded it in a short time. Thus, Turkey has returned to the stage in Syria after facing the National Intelligence Organization (MİT) trucks plot and various other interventions intended to neutralize its influence in Syria, and after repelling attacks launched through the PKK, FETÖ and Daesh in order to turn it into a new Syria. While a project to create a terrorist corridor had gone smoothly back then, the picture is totally different today. For the creation of such a corridor would threaten Turkey's territorial integrity. And the entire world knows that a Turkey with domestic stability and good governance would never allow this.

The issue is not limited to these developments. A short while after the July 15 coup attempt, Turkey enacted a historic reform to its government system by approving a presidential system with the April 16 referendum. This means the elimination of the fragmentation of power and the direct reflection of national will in government. From now on, a party or a leader has to come to power with the approval of 50+1 percent, not through low vote shares or the support of a certain segment of society. This is a rather difficult job. But difficult as it is, though, it can empower the central politics and ensure normalization. Now, every candidate has to persuade all segments of society. As things get difficult for politicians, a democratic system with the national will having the final say is adopted. A more active administrative structure and quick decision-making and oversight mechanisms are among other gains brought by this system.

Hence, we are having the first anniversary of a coup attempt whose success or failure would have led to such radically different consequences. I hope that international powers will appreciate Turkey's value better and stop sympathizing with terrorist groups. As a democratic, secular and Muslim country, Turkey is a precious model for both the world and the region. It does not have an eye on another country's land. It is always open to collaboration and development of joint projects and continuing them on the basis of equal relations. Although Ankara has not been happy at all with the attitudes of its allies and friends in recent years, it is willing to mend relations and act reasonably.

When it comes to its independence and territorial integrity, however, it is determined to go to all lengths.