The evidence against Fetullah Gülen behind coup attempt 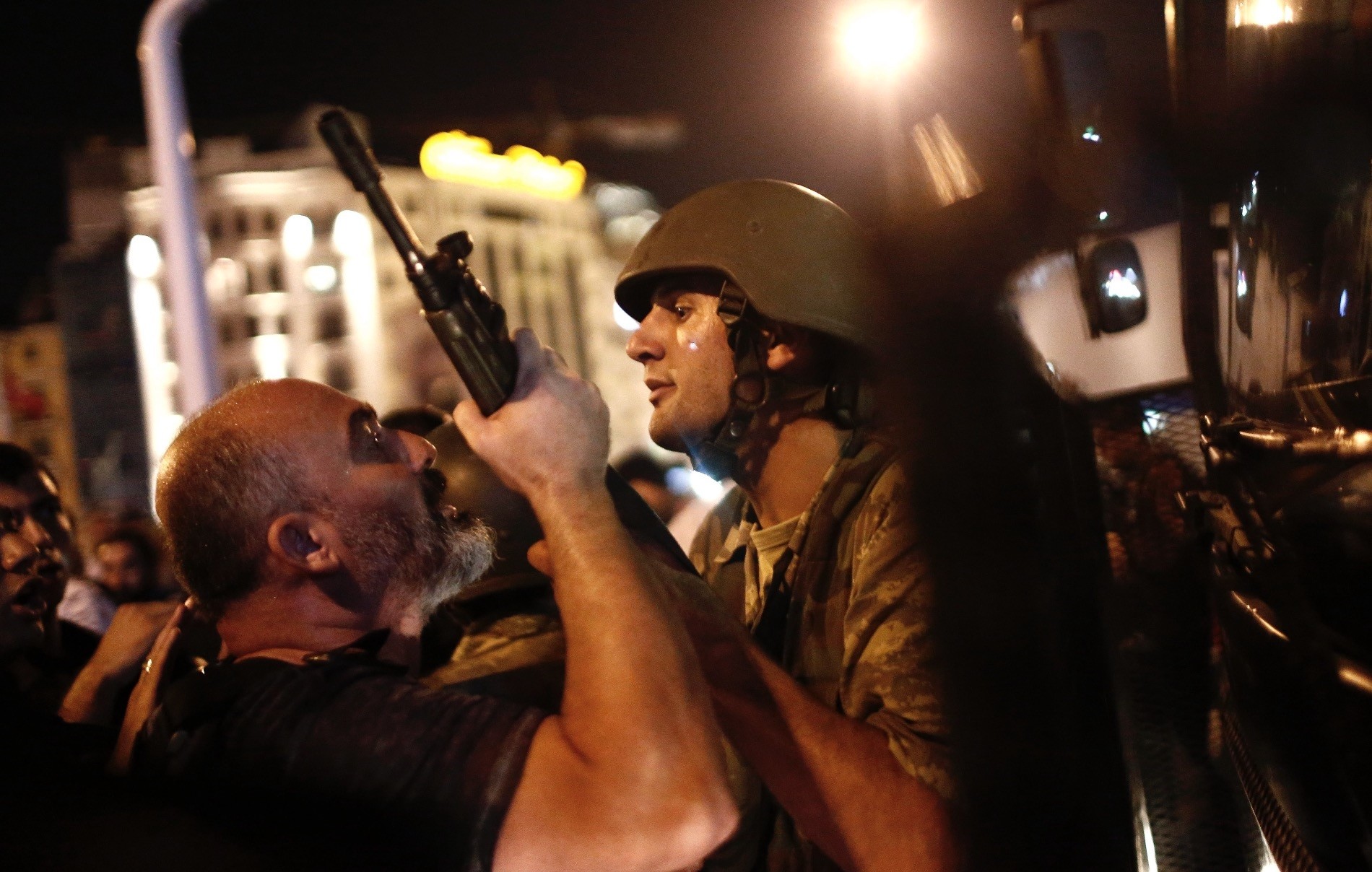 A man resisting a coup officer as the July 15 coup attempt perpetrated by FETu00d6 wasn't repelled yet, Taksim Square, Istanbul.
by Cem Duran Uzun Jul 14, 2017 12:00 am

One year has passed since the July 15 coup attempt in Turkey. Neither in the hours that followed the deployment of soldiers to the streets nor over the following months did the people in Turkey have any doubt that this attack against Turkish democracy had been planned by Fetullah Gülen, a U.S.-based Turkish national, and carried out by his followers in the military. In the wake of the failed coup, the ruling Justice and Development Party (AK Party) and the vast majority of opposition parties agreed on this point. Although the Republican People's Party (CHP) leadership later claimed that July 15 was a "controlled coup", it never actually challenged the claim that Gülenists were behind the assault. Nor did any political party produce concrete evidence to support such claims.

It would appear, however, that there is a certain amount of doubt and confusion outside Turkey regarding the coup attempt and the group behind it. Needless to say, a contributing factor to this confusion has been Gülenists' global lobbying efforts against the AK Party and President Recep Tayyip Erdoğan. The evidence contained in case files against the coup plotters, including video footage, digital communications, official documents, witness testimony and affidavits, however, clearly establish that last summer's coup attempt was orchestrated by FETÖ members – civilian leaders called imams and military officers.

According to official indictments, which have been covered broadly in the Turkish media, the organization started planning the coup attempt after the November 2015 elections when the AK Party regained its parliamentary majority after a brief deadlock, and initial steps were taken by authorities to dismiss from public service undercover FETÖ operatives in strategically important institutions. According to court documents, members of the group rented a villa in the suburbs of the capital Ankara on Nov. 9, 2015, just eight days after the election, where the organization's civilian leaders who were in charge of cells in the military held meetings with military officers. The crackdown on FETÖ's media and financial companies, coupled with the dismissal of undercover operatives from public service and court cases being filed against known FETÖ members, turned the screws on the group. Finally, fearing that they would lose all control over the Turkish Armed Forces following an upcoming meeting of civilian and military leaders, FETÖ operatives struck on July 15. Although various developments, including an uptick in terrorist attacks, made it easier for the coup attempt to take place, the timing was decided by the group.

The so-called civilian imams who oversaw the coup plot were known to non-FETÖ members as college professors, engineers, merchants and teachers. Adil Öksüz, Kemal Batmaz, Nurettin Oruç, Harun Biniş and Hakan Çiçek have been identified by the courts as the core group of people who delivered orders from Fetullah Gülen to their cells in the military. Batmaz served as an executive in one of many FETÖ-affiliated private companies. Çiçek owned a private school with known ties to the organization. Oruç was a shareholder at another private company that had been investigated over FETÖ ties. Biniş, in turn, owned shares in four companies and was named as a defendant in an ongoing investigation about illegal wiretapping by the country's telecom authority.

All of the five civilians named above were apprehended at or near Akıncı Air Base, the coup plotters' headquarters, by security forces on July 16. Although they denied they were linked to the coup attempt, video footage from the base clearly showed that Batmaz, Biniş and Oruç were inside the compound. Although Öksüz and Çiçek were able to avoid being detected by security cameras, at least three military officers, including base commander Gen. Hakan Evrim, said that they had seen the two men at the base on the night in question. Although Çiçek eventually admitted that he was indeed at the base, he rejected the claim that his presence was related to the failed coup. The evidence against them includes airport records, security footage, cellphone signals, plate recognition system records and witness testimony.

Moreover, two anonymous witnesses who testified to prosecutors in the western city of İzmir under the pseudonyms "Şapka" and "Kuzgun", told authorities that they had been summoned to Ankara by FETÖ members and attended a preparation meeting chaired by Adil Öksüz at the aforementioned villa in the capital. They recalled Öksüz excusing himself repeatedly to leave the room to clear the various details of the coup plot with Gülen. Over the next months, "Kuzgun" revealed his identity as Rear Adm. Halil İbrahim Yıldız.

Levent Türkkan, the aide-de-camp of the Chief of General Staff Gen. Hulusi Akar, provided a detailed account of the actions he had taken since military school under orders from Gülenists and told authorities that he had heard about the coup attempt on July 14 from Sgt. Orhan Yıkılkan, an advisor to Akar he knew to be a fellow Gülenist. Türkkan confessed that he had been tasked with detaining Turkey's top military official, which he said he accepted.

Several other military officers, including Maj. Haydar Hacıpaşaoğlu, Lt. Col. F.E. and Maj. M.T. told prosecutors that they were informed by the civilian imams that around 3,000 FETÖ-linked soldiers were going to be dismissed in August 2016 and Gülen had ordered the overthrow of the government to prevent this.

Similarly, Lt. M.M., a pilot in the Air Force who served at Akıncı Air Base, reported that a lieutenant colonel had urged the group to take action before all FETÖ operatives in the military were dismissed. Moreover, Lt. Col. İlkay Ateş, another pilot, confessed to have joined the Gülenists in his childhood years, attended a meeting with Lt. Col. Özcan Karacak, Capt. Taha Fatih Çelik and Lt. Col. Erdal Başlar two days before the coup attempt in an apartment in Ankara and received information and instructions from an individual code-named "Ramazan". According to official indictments and media reports, a large number of former soldiers who participated in the failed coup had made similar statements and confessed to being FETÖ members.

At the same time, a number of high-ranking military officials, including Gen. Akar, who were kidnapped and held hostage by putschist soldiers, told prosecutors that FETÖ was behind the coup attempt. Akar stressed that preparations were underway to dismiss a large number of Gülenists from the military in August 2016, and explained that he had been offered a phone call with Gülen by Hakan Evrim, the commander of Akıncı Air Base.

More than 200 trials have been launched in almost 30 cities, including Istanbul and Ankara, since the July 15 coup attempt. Although some proceedings have already been completed, the vast majority of cases continue to be heard. Investigations by the prosecution and judicial proceedings largely established that the coup attempt was orchestrated by Gülenists even though the group aimed to avoid detection by adhering to a strict policy of deception (tedbir) and having created cells throughout the military establishment. At this point, there is no doubt that the failed coup was orchestrated and planned by Gülen and executed on his orders by civilian and military FETÖ operatives.