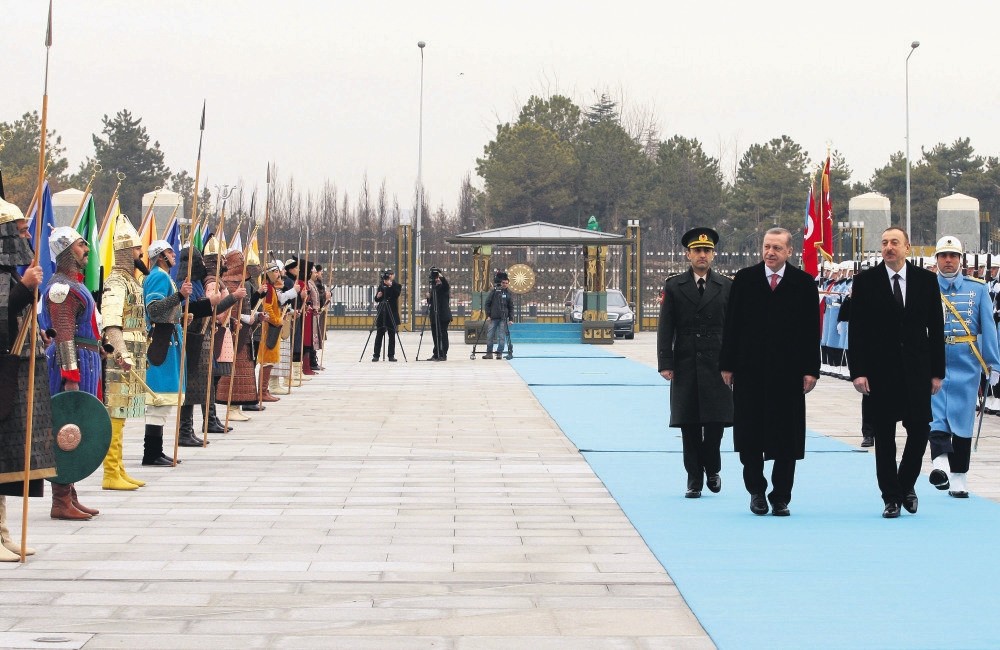 President Erdou011fan welcomes Azerbaijani President Aliyev in an official ceremony at the Presidential Palace in Ankara with Turkic soldiers, dressed as the soldiers of the 16 Great Turkic Empires in history, Jan. 15, 2015.
by Özge Nur Öğütcü Aug 04, 2017 12:00 am

Since the dissolution of the Soviet Union in 1991, Turkey has been trying to implement comprehensive policies on the newly independent, post-Soviet Turkic states of Azerbaijan, Kazakhstan, Kyrgyzstan, Turkmenistan and Uzbekistan. Regional developments in the 1990s encouraged Turkey to adopt appropriate policies as the political and economic situation permitted Ankara to have only a limited role in the region. This was not only because of regional complications but also because of Turkey's domestic economic problems in the late 1990s and early 2000s. Even though Turkey was the first country to recognize the independence of the Turkic states, it was rather difficult for Turkey to analyze the reality on the ground. Yet, with the establishment of state agencies and regional organizations since the early 1990s, relations among the Turkic states have been developing on more solid ground.

In the early 1990s, high-level visits, meetings and summits were immediately held and politicians expressed intentions to build strong ties with the Turkic states. Officials and the governments aside, a range of intellectuals, scholars and businesspeople showed great enthusiasm — recalling ideologue İsmail Gaspıralı's call to Turkic peoples to form "unity in language, mind and work" (dilde, fikirde, işte birlik). Many scholars and politicians argued that Turkey could represent a model for Turkic states to adopt Western values such as democracy and open market economy, while maintaining the traditional features of their societies.

However, the political and economic environment proved to be beyond all forecasts. In the 1990s, Turkey did not foresee its capacity to support newly independent countries. Turkic states faced political and economic problems that were difficult to quickly overcome. Powerful actors such as Russia and China tried to become more active in the region while the Western world turned to offering new opportunities and tackling challenges. Even now, neither Russia nor the Western bloc have given up on their areas of influence in the region mainly because of its rich energy resources, security issues in Afghanistan and the geostrategic importance of the "heart of Asia" for China and the "near-abroad" for Russia.

The emergence of regional organizations

The 1990s and early 2000s saw the emergence of new regional organizations such as the Shanghai Cooperation Organization (SCO), the Conference on Interaction and Confidence Building Measures in Asia (CICA) and the Economic Cooperation Organization (ECO). Turkey's initiatives to include Turkic states in the ECO as one of the founding members and its participation in the CICA and SCO enabled Turkey to observe agendas of regional actors and engage with Turkic states under the umbrella of regional formations as well. Moreover, Turkey gave the signal that it would not leave the land-locked Turkic countries alone. In addition, joining the Organization of Islamic Cooperation (OIC) connected the newly independent Turkic countries to 52 countries with Muslim populations. The main tasks of these institutions are to provide assistance, open dialogue channels to avoid crises and provide platforms to address regional issues inclusively. All of them still function with the aim to empower countries in the region, but the ECO and CICA have more potential than their current states.

Relations on the bilateral level also have been proceeding on a promising path. Overall trade volume between Turkey and the Turkic states reached $7 billion in 2016, according to Economy Ministry data, and mutual investments have been increasing. Political ties have been bolstered with high-level mechanisms, such as the High Level Strategic Cooperation Councils Turkey has with Kyrgyzstan, Kazakhstan and Azerbaijan.

But more steps need to be taken. Learning from previous experience, mistakes and recognizing the momentum in the region, Turkey has been reconnecting with the Turkic states on the bilateral level via state agencies as well as regional organizations. The institutionalization of relations would offer a more organized and sustainable ground to build on. In that sense, Turkish state agencies are helping to strengthen cooperation as Turkey was lacking a pragmatic roadmap with tangible outcomes or sustainable policies and Turkish authorities have been excluding developments in the region while trying to assess its developments.

The importance of a Turkish agency in the post-Soviet era

In that regard, the Turkish Cooperation and Coordination Agency (TİKA) was established in 1992 to coordinate Turkey's foreign aid efforts. TİKA was the outcome of Turkey's rapid reaction to developments in the surrounding regions in the post-Soviet era and in neighboring regions. Soon, Turkey became a very active donor in various regions. TİKA has been dedicating a considerable amount of aid to Central Asia and the South Caucasus. According to the latest report published by TİKA in 2016, the amount of the year-end expenditure of its Department of the Central Asia and the Caucasus was TL 27.5 million ($7.76 million), which is approximately 10 percent of the total year-end expenditure of the agency in 2016. According to TİKA's annual report, $53.03 million was dedicated to Central Asia and the Caucasus in 2014. Even though the share decreases, the overall amount has been increasing.

Another important institution for Turkey to establish institutionalized ties with the Turkic states on the state level is the Presidency of Turks Abroad and Related Communities (YTB). The YTB is one of the important pillars of Turkey's public diplomacy activities. It was established in 2010 with the aim to build bridges among Turkish-origin people living abroad and related communities. Additionally, the YTB coordinates the Türkiye Scholarships to give opportunity to non-Turkish students from different regions to develop their academic skills on various fields and study in Turkey.

Besides state agencies, Turkey has been supporting the creation of other agencies among Turkic states as well establishing the bases to institutionalize relations since the early 1990s, and the progress has been more visible since the early 2000s. High-level relations started with the process of the Summits of Turkic Speaking States, initiated by Turkey in 1992, and led to establishment of the Turkic Council in 2009 with the Nakhichevan Agreement. The Turkic Council aims to build inter-governmental ties among member states. It works with international institutions, as well. For instance, recently, the Turkic Council signed an agreement with UNDP to work together on the implementation of the U.N.-set Sustainable Development Goals. The Turkic Council's work covers transportation, tourism, culture, media and so on. Other important institutions are the International Organization of Turkic Culture (TURKSOY) established in 1993, the Parliamentary Assembly of Turkic-Speaking Countries (TURKPA) established in 2008, International Turkic Academy established in 2010, the Turkic Culture and Heritage Foundation whose founding document was signed in 2012, and the Turkic Business Council whose founding document was signed in 2011.

Today, Turkic states host Turkish universities such as Kyrgyz-Turkish Manas University in Kyrgyzstan and Akhmet Yassawi University in Kazakhstan. The Yunus Emre Institutes in Astana and Baku for Turkish language education have been providing learning opportunities to young people.

Yet so far relations between Turkic states had been limited even in the bilateral sphere, not to mention regional cooperation. Even though each organization has a different mission, their common target is to improve political ties and promote cooperation in trade, tourism, education and culture. They act as bridges by providing platforms for further communication to overcome the regional challenges. However, currently, Uzbekistan and Turkmenistan are not members of any ideational formations. Turkmenistan preferred to adopt non-aligned policies following its independence, and relations with Uzbekistan are rather complex.

Eventually, these efforts will support Turkic states to integrate with the international community and pursue discussions in formal platforms aiming overcome differences and reach a common understanding on regional issues. Turkey has common history, heritage, cultural and religious ties, and brotherly relations with Turkic states. The potential of the region covering Turkic states should not be underestimated. Projects such as the Baku-Tbilisi-Kars railway, the Baku-Tbilisi-Ceyhan pipeline, the Baku-Tbilisi-Erzurum natural gas corridor and Trans-Anatolian Gas Pipeline (TANAP) are the main examples that underline the existing potential in the region, and the success of these projects is hoped to have a spillover effect on politics, leading to further cooperation. Moreover, a global-scale initiative called the One Belt One Road (OBOR) led by China focuses on Eurasia. Regional organizations efforts to bring Turkic states around the same table and initiatives like OBOR will connect Turkic states with the international community more, build ties among people, increase the welfare of the countries in the region and support the projects on natural resources for global benefits.