The vision of Uzbekistan for cultural and civilizational development 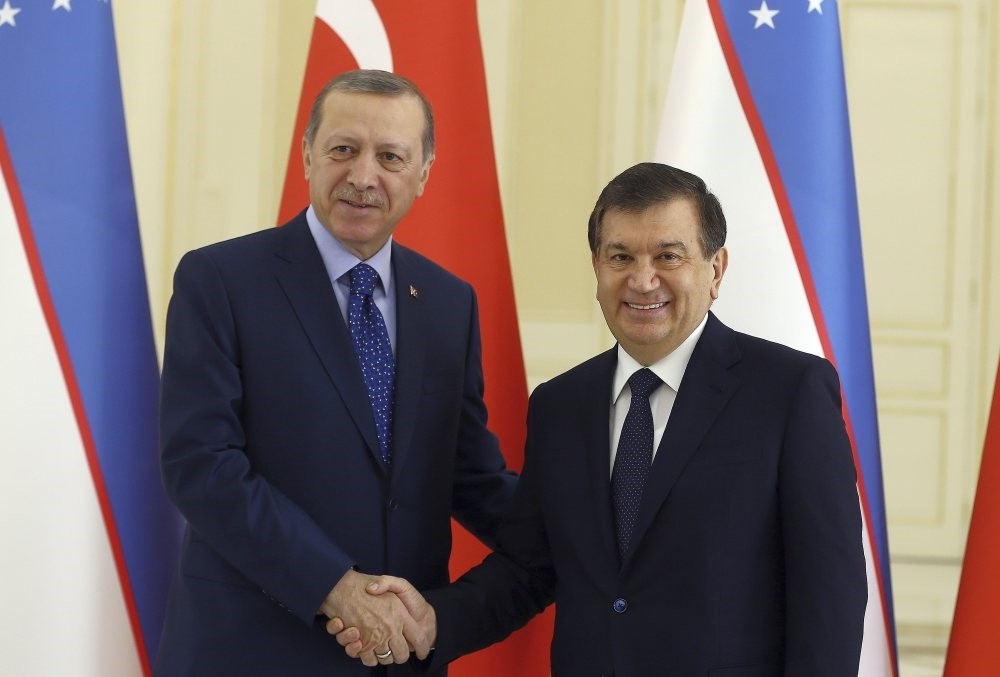 Central Asia has been a cradle of science and learning throughout history. As such, the region has made substantial contributions to scientific developments and the advancement of world civilization by raising eminent scholars and scientists in various fields. Major schools of thought, world-class research centers and scientific traditions were born in the region, which stood at the crossroads of trade routes and channels of human mobilization. Central Asia has been a major center of trade and inter-cultural relations since antiquity when communities from different ethnic, religious and cultural backgrounds coexisted peacefully. The region played an important role in the transmission of goods and services as well as thoughts, ideas, arts and sciences across societies. The emphasis given in Islam to scientific knowledge and learning as well as tolerance shown to other cultures and civilizations contributed to the galvanization of an atmosphere of constant scholarly and intellectual development.

Therefore, since the advent of Islam in the seventh century, cities in Central Asia, such as Bukhara, Samarkand and Khiva, became major centers of scholarship in religious and natural sciences. Religious scholars who originated from what is now Uzbekistan, such as al-Bukhari and al-Tirmidhi, played a leading role in the development of hadith, al-Maturidi and an-Nasafi and were major figures in kalam, while scholars such as Zamakhshari and Samarkandi contributed to the progress of Quranic sciences. Omar Khayyam, Abu Ali Ibn Sina, al-Khwarezmi, Abu Nasr Farabi and Ulugh Bey were leading scientists who worked and gained recognition in the region in mathematics, astronomy, medicine, physics, metaphysics and philosophy. The rich historical experience in Central Asia proved the coexistence of experimental and encyclopedic knowledge of religious sciences in an environment of peaceful coexistence and intercultural tolerance. This experience could shed light on current attempts to resolve the problems of humanity through emphasis on scholarship, scientific progress and social solidarity.

As the main cultural subsidiary of the Organization of Islamic Co-operation (OIC), an inter-governmental organization with 56 member states located on four continents, the Research Center for Islamic History, Art and Culture (IRCICA) provides the cultural dimension of diplomacy and development cooperation among its member states. The IRCICA conducts research, publishing and training programs and organizes symposiums, art and architectural competitions and cultural heritage preservation programs. The cumulative impact of these activities provides a strong contribution to the spread of tolerance and peaceful coexistence through international projects coordinated on global cultural issues.

The IRCICA has focused on projecting a true image of Islam and Islamic cultures and promoting tolerance and understanding among different faiths and cultures. The center has so far coordinated various activities and programs focusing on the history and cultural heritage of different regions of the Muslim world and their shared cultural histories, exchanges and coexistence with other faiths and civilizations. The center's multifaceted activities place special emphasis on encounters between different cultures and civilizations, intercultural relations, peaceful coexistence and multiculturalism. To this end, the IRCICA regularly collaborates with international institutions such as UNESCO, the Council of Europe and the United Nations Alliance of Civilizations (UNAOC) to promote positive dialogue among different cultures and civilizations, while preventing prejudice and misinformation that could feed into discrimination, xenophobia and extremism.

As part of the emphasis given to international collaboration to promote intercultural dialogue and prevent the spread of extremism, the IRCICA is a member of the Group of Friends of the UNAOC and has actively participated in annual forums of the alliance since their inception by organizing special sessions. As part of our efforts to facilitate interactions among people from different cultures, civilizational spheres and faith communities, we organized international academic congresses, symposiums and workshops in collaboration with scholarly institutions and research centers in the Balkans, Central Asia, South and East Asia and East, South and West Africa. In collaboration with the Chinese Academy of Social Sciences, three international congresses were organized on China and the Muslim World, while an international symposium on Interfaith Dialogue and Peaceful Coexistence in Multicultural Societies was jointly organized with the Devawongse Varopakarn Institute of Foreign Affairs (DVIFA) of the Kingdom of Thailand. The occasions brought together Muslim, Christian, Buddhist, Confucian and Taoist scholars and religious institutions and intellectuals on an international and interdisciplinary platform.

Being a crucial partner in IRCICA activities in Central Asia, Uzbekistan represents a crucial example in terms of the peaceful coexistence of various ethnicities and nationalities under the rubric of a truly multinational and multi-faith society. Hosting some of the greatest cultural and civilizational centers in the Islamic world, such as Bukhara and Samarqand, Uzbekistan is home to more than 130 ethnicities and nationalities.

The president of Uzbekistan, Shavkat Mirziyoev, made a crucial speech during the congress, "Ensuring Social Stability, Safeguarding the Purity of our Sacred Religion as an Imperative of Time," in June 2017 and outlined the future vision of Uzbekistan on culture and civilizational development. He attracted attention to the fact that the majority of humanity is concerned about universal problems such as dissemination of international terrorism, extremist movements, ethnic and sectarian confrontations, refugee crises, environmental problems, acute poverty and youth unemployment feeding into social instability.

He stressed that 138 national cultural centers in Uzbekistan are making great efforts to disseminate peace and harmony among different ethnic and religious groups across the country. Mirziyoev's administration made great efforts to improve the state of tombs and madrasas established by these great scholars. Furthermore, the IRCICA continues to collaborate with Uzbek authorities to assist and contribute to founding an international scientific and research center named after al-Bukhari.

But as Mirziyoev emphasized, despite the true message of Islam calling for peace, harmony and peaceful coexistence, there is a rapidly spreading danger in the Muslim world through destructive movements. Therefore, scholars, intellectuals and civil leaders need to collaborate with policymakers to explain the truth to Muslim youth and convince them that violence and bloodshed will never prevail over peace and righteousness. The root causes of radicalization include socio-economic deprivation and lack of proper education and social policies. Discriminatory political approaches also need to be addressed urgently.

Accelerated and multifaceted processes of social, economic and cultural globalization in recent decades paved the way for the emergence of an increasingly interconnected world through enhanced opportunities for human mobility, communication and interaction between different cultures, faith groups and civilizations. Leading intellectuals and policymakers in the Islamic world and beyond repeatedly emphasize that respect for sociocultural diversity and tolerance of other groups needs to be seen as fundamental principles of peaceful coexistence in multicultural societies. Numerous congresses, symposiums and workshops were organized across the world by a plethora of institutions, including the IRCICA, to underline our diversity while representing different identities constitutes fertile ground for social and cultural enrichment, mutual progress and governance innovation through inclusive interaction.

Therefore, it is extremely important to stress that the prevalence of a global environment of pluralism that recognizes the existence of different cultural identities as a source of social diversity without any discrimination is indispensable to encourage preservation of their heritage in its totality. Such an environment would also facilitate and increase intensification of cross-cultural exchanges through various academic, civic and artistic channels. If we could achieve even the semblance of such an environment with the active collaboration of national policymakers, social leaders, intellectuals, civil society movements, scholars, diplomats and international institutions, the galvanization of social peace and comprehensive advancements in the arts, sciences, literature and governance would not be so difficult to achieve.

Empathy and compassion, essential features of human nature, come from the creation of God and objective knowledge about the common legacies of societies that reinforce a sense of mutual tolerance and peaceful coexistence. All true religious teachings refer to the principle of tolerance as one of the fundamental principles of social relations. However, increasing civil wars, regional conflicts, sociopolitical tensions, economic crises and the rise of marginal/far-right movements in recent years have led to a substantial weakening of crucial social values such as tolerance, empathy and peaceful coexistence the world over.

The resulting gap has been filled with the spread of violence, extremism, discrimination, xenophobia and hate crimes targeting different cultures. In the wake of ongoing wars, failed states, security problems and refugee crises originating from the Middle East and elsewhere, new forms of intolerance have become widespread, comprising defamation of religions and incitement to hatred on the basis of religious diversity. Crucial manifestations of this negative trend have been the rise of extremist movements in some societies in the Muslim world as well as anti-Muslim extremism and Islamophobia in Western societies, academia and mass media.

I would like to take this opportunity to reiterate the IRCICA's commitment to contribute to global efforts to curb all forms of radicalism and anti-Muslim extremism. The future vision of Uzbekistan under the capable leadership of Mirziyoev on cultural and civilizational development also needs to be commended as an inspiring national example in the Muslim world.