Does art really have to hold society together? 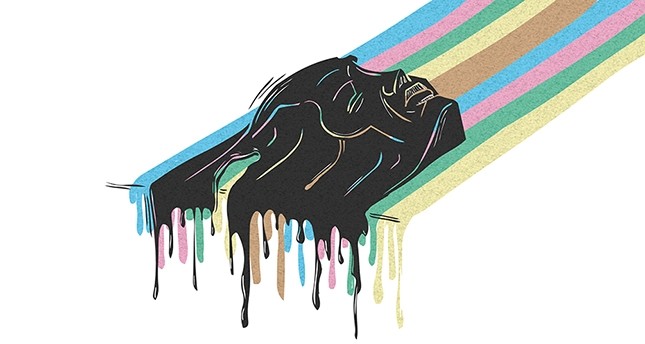 Whether they take on the responsibility of promoting a certain belief or preaching religious feelings, artists should respect the nature of all faiths and must focus on humanity's common issues with the intent of holding society together

Should art entertain or educate? Ever since ancient times, this question has emerged in different forms that amount to the same meaning. Today we encounter many examples that force us to contemplate whether art should be an esthetic phenomenon, a manufactured commodity or an ideological tool. Political developments at both local and global levels and a quickly changing agenda inevitably surround the artist as well and shape their work. How can the artist have the ability to control their own stance and approach in the face of a dizzying change in the modern world? Through ideology or beliefs or by having a distinctive personality and position? Should the artist produce their work in line with their ideological and religious convictions? Or whatever their opinions and beliefs are, should the artist preach these opinions and beliefs to the target audience through their work?

If ever the artist should have a duty, I believe that art must be tasked with holding society together. It depends on the ideology and convictions of the artist whether the society overseen should have an ethnic or national orientation be it mixed or cosmopolitan. Hence the debate inevitably takes place within a framework of beliefs and opinions. Stripping art of convictions and ideology is almost impossible. All artistic endeavors, wherever they appear, turn out to be extensions of a worldview.

Take the art for art's sake approach. That concept was born out of the artist's decision to not produce a commodity or product at a time when the idea that almost everything is purchasable was in high fashion. Starting as a movement against capitalism, it has become virtually an instrument of capitalism today, emptied of its content. Just like the science for science's sake approach. Capitalist understanding transforms every concept and approach, empties them of their essence and turns them into instruments working to its advantage, just as an alien organism entering another organism, sleeping there and gradually eating away its host.

Whether they take on the responsibility of promoting a certain belief or preaching religious feelings, the artist should respect the nature of any faith in both cases. They should avoid producing offensive content and offer inviting content instead, observing fundamental tenets and moral principles of that faith. The artist must focus on social issues and pay regard to justice. As I pointed out at the beginning, it is nearly impossible to strip art of any belief, political leaning or worldview. The most important factor coming into play at this point is the portrait of an artist with a character and stance. People are riddled with flaws. What makes the names of some prominent artists, poets and writers, each with their own weaknesses just like other person, go down in history is not their ideology or beliefs, but the fact that they have a distinct character and stance while having many admirers and detractors alike. A portrait of the artist seeking justice even if it is against their own interest seems to have already become a rarity.

Disdaining art and valuing it above everything else is two ends of the same spectrum. We can describe the dominant understanding of art in Turkey with the latter. In Turkey, assuming the identity of an artist resembles acquiring some sort of shield of immunity. Artists set a mission for themselves, as they have in the past, while exalting the artist and art and ascribing themselves almost divine or demonic powers. Artists believe they act in a space that is utterly free and exempt from any sanction or responsibility whatsoever. The intractability of the artist and the accompanying tendency to rebel must stem from their viewing mundane obstacles as enemies of inspiration that may hinder creativity. The glaring weaknesses, eccentricities and immoral and unnatural orientations of some past and present artists can be explained through this way. The prevalent view of art today has come to encourage every kind of peculiarity, folly, indifference and madness and to even pioneer them. And that, in turn, brings along atomization of the individual, disintegration, social alienation and helplessness in the face of resulting harsh conditions.

How art must be

In Turkey, when one speaks of art the first names that come to mind are usually those of TV series and movie actors and musicians. Sadly, the area of fine arts is not regarded by the society as prestigious as movie and TV series. Or, it is not esteemed as high as the others. Of course, this may be related to selective the society's interest. It is not realistic to expect an artistic sensitivity from a society that is fed a regular stream of coverage via TV about these actors and actresses. It is not hard to predict how much a populist form of art can advance.

I do not know if there is any other place than Turkey where art is transmitted from father to son. Thanks to their privileges and connections, many famous musicians can hand down their profession to a son or daughter despite their lack of competence. Surely, this is done through marketing and promotion. Turkey is a place where matters like qualifications and competence are brushed aside and certain figures can be hyped and presented to society. There are probably similar examples in lots of countries. Just as artistry cannot be handed down from parent to child, so art cannot be practiced properly by lobbying, favoritism or forming cliques. We have witnessed many times how artists conducting artistic initiatives with this approach have fallen out with each other in the end. Of course, art should not be dealt with in this narrow framework. Besides, it would not be correct to overlook TV, generally the first medium to come to mind in Turkey when one speaks of art.

Touching briefly on how art should be, when art is at a good level somewhere, social analysis would similarly produce positive results. What is meant by the good here is the topic of another article. Let me briefly summarize that good is an abstract concept referring to the inoffensive, that which generates solutions and not problems and that which is not provocative but inviting and inclusive. An artist should have qualities like having a definite identity and character, honesty and industriousness. Art that is produced with bohemian aspirations, oddities and follies brings along mental disintegration and degeneration. All artistic work that is presented without dismissing the good and without offending society's moral norms deserves the greatest respect.