Can Trump be saved from himself? 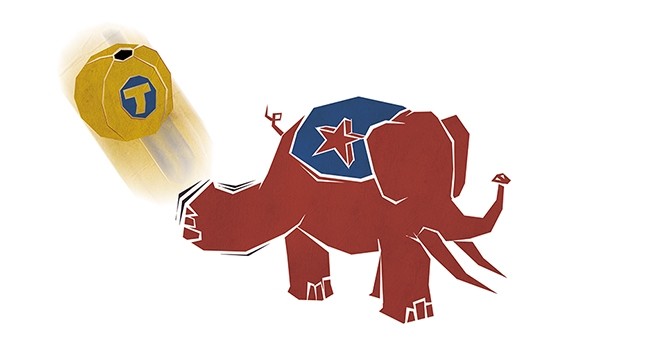 As a result of underestimating the effects of ensuring balances in the internal dynamics of U.S. governance and putting personal ambitions first, President Trump has created an enemy in himself that may ultimately become his own end

U.S. President Donald Trump addressed the victims of hurricane Harvey in Corpus Christi, Texas, which has killed at least 15 people and displaced thousands of others with "What a crowd, what a turnout." Trump often used this phrase during his election campaign to boost the morale of his supporters and as self-promotion against his rivals, saying look how many people are here for me. At first, such utterances may seem natural to hear from a politician at a regular rally, but in Trump's case, it reflects the president's personal struggle to maintain his celebrity character, while continuing his role as the president of the global superpower. Of course, the use of such words that highlight the quantity of people that showed up to listen to him during an address after such a deadly natural disaster is another matter that is particularly problematic and perhaps counterproductive. While this could be considered a political gaffe, the fact that Trump already has a list of these in the short time he has been in power pushes one to analyze them outside of situations that could be considered gaffes.

A similar incident happened recently during Trump's address after the violence in Charlottesville between racist far-right groups and anti-racist groups when he first blamed "both sides" and said there was good and bad in both, instead of denouncing white supremacist and racist violence, which is what would normally be expected. In a way, he was showing sympathy for the white supremacist group's efforts to preserve Confederate monuments. When asked about his comments a couple days after this speech, he went ahead and defended himself, while also going into a personal rant against reporters, moving away from the prepared speech and the teleprompter in front of him. This speech was later followed by one in which Trump, strictly following the words on the teleprompter in front of him, called for unity in the country, saying that no American should be discriminated against based on racial differences. "We're not defined by color of skin or paycheck," he said in his last speech on Charlottesville on Aug. 23. What emerges here is that there is one event, the Charlottesville violence, but three different Trumps. Which Trumps' position reflects the U.S. president's stance on this specific incident? Which Trump is President Trump? The Trump on Twitter? The one that follows the teleprompter? Town hall Trump? Or the Trump that goes on rants against reporters

Such self-conflicting personality traits, which can even rise up to losing control during press conferences, have made the U.S. president into his own enemy, which leads to his isolation and abandonment even by his firm supporters.

After his controversial remarks on Charlottesville, two strong factions in the U.S. implicitly positioned themselves against Trump. They were joined by members of his own team in the White House who have explicitly been in conflict with him and who then were either fired by the president or resigned on their own as a result of Trump's inconsistencies.

Members of the Joint Chiefs of Staff – the commanders of the army, navy, air force, marines and national guard – sent veiled messages via Twitter, a platform very familiar to Trump, implying they do not approve of such comments from the president that could trigger civil conflict and promotes white supremacy. In other words, the leaders of the U.S. military who advise the White House on the country's most important security matters were distancing themselves from the commander-in-chief.

"The Army doesn't tolerate racism, extremism, or hatred in our ranks. It's against our Values and everything we've stood for since 1775," Chief of Staff of the U.S. Army Gen. Mark A. Milley tweeted on Aug. 16.

"I stand with my fellow Joint Chiefs in condemning racism, extremism & hatred. Our diversity is our strength. #NationalGuard," Chief of the National Guard Bureau Gen. Joseph L. Lengyel tweeted on the same day.

Robert B. Neller, chief of the U.S. Marine Corps, following the heads of the other branches of the military, similarly said: "No place for racial hatred or extremism in @USMC. Our core values of Honor, Courage, and Commitment frame the way Marines live and act."

Of course, the Joint Chiefs of Staff did not explicitly show a stance against Trump's racial remarks, as expected, but the fact that they put forward a strong and unified voice against the white supremacist violence in Charlottesville should not be seen as detached from the effects of Trumps remarks made after the incident.

Another group in the U.S. that also did not welcome Trump's remarks on Charlottesville consisted of leading business figures whose support Trump had managed to gain during the election campaign.

CEO's from Trump's two business advisory groups, the Strategic and Policy Forum and the Manufacturing Council, stood against Trump, resigning one after another, after the president's controversial remarks.

Both the heads of the military and CEOs of top businesses in the U.S. know very well that one thing that cannot be put at risk is human capital, especially considering the diversity of all kinds in the U.S. military and business world. While this would be dangerous for their institutions and establishments, they also should have provoked the thought that triggering racial tension in American society, more than it has been by the Black Lives Matter movement, could turn into a slow rolling crisis, as former President Barack Obama had put it during incidents in Baltimore and Ferguson, into a new civil war in the country.

It is also noteworthy to mention that Trump's racial remarks, which did not condemn white supremacist groups and in a way supported them, also plays against his pro-Israel rhetoric.

Such inconsistencies, particularly when it comes to matters related to race and religion, in addition to foreign policy and other domestic matters, have made off-the-cuff Trump an enemy for President Trump. An emphasis should be put between the two Trumps if the world superpower is supposed to be led by a consistent political leader. In other words, motivated by personal ambitions and ideological obsession, Trump has built an enemy of himself for himself.

Will Trump one day also fire himself from the White House?

Trump's inconsistencies in policy and political rhetoric, as well as his personal conflicts, have also affected his White House team. Several high-profile staff members in and out of the White House either resigned or were fired due to conflict with the president. Some of the prominent figures include, as of Aug. 30, National Security Adviser Michael Flynn, Press Secretary Sean Spicer, FBI Director James Comey, Deputy White House Chief of Staff Katie Welsh, and among the latest to resign, Chief Strategist Steve Bannon.Among these figures, Bannon's resignation, as he calls it – or firing according to the White House – is perhaps the most personal to Trump, as Bannon was the power behind the man, a figure who had fueled the right-wing, Evangelical pandering and ultranationalist tendencies in Trump policies.

In fact, this week Trump fired a long-term aide, George Gigicos, who worked for the Republican National Committee and had previously managed scheduling and events him, after Trump was not happy with his turnout at the rally in Phoenix, ArizonaSuch conflicts with White House staff is an indicator of two things: Either Trump is not a team player and cannot get along with his team or these picks were all bad picks and Trump will now replace them with (presumably) better ones. Analyzing the trends in Trumps personal history during his less than a year of leadership in the country, perhaps the first option may seem more viable, and even more suitable to his celebrity characteristic.Trump has not only had problems with White House staff, but major voices from his party have also positioned themselves against Trump on several issues, most recently being on his remarks on Charlottesville. Republicans, such as House Speaker Paul Ryan and Senators Ted Cruz and Mitch McConnell have differed in opinion with Trump and condemned white supremacy, while figures such as Senators John McCain and Marco Rubio have condemned Trump for the remarks. Vice President Mike Pence has been the only prominent figure supporting Trump's comments.

"There's no moral equivalency between racists & Americans standing up to defy hate & bigotry. The President of the United States should say so." McCain had tweeted, calling on Trump to take a clear position on white supremacy.

Such reading of Trump's personality, one which has led him to become his own enemy, indicates that he is not ready to be president of the United States, as he would need to understand politics, the domestic dynamics of the U.S. government and the balances within society.

Share on Facebook Share on Twitter
Previous in Op-Ed The April 16 constitutional referendum has two significant outcomes... Next in Op-Ed Hopefully, the BRICS summit in Beijing will provide Indian and Chinese...
DAILY SABAH RECOMMENDS