India China border dispute: The worst case scenario is over 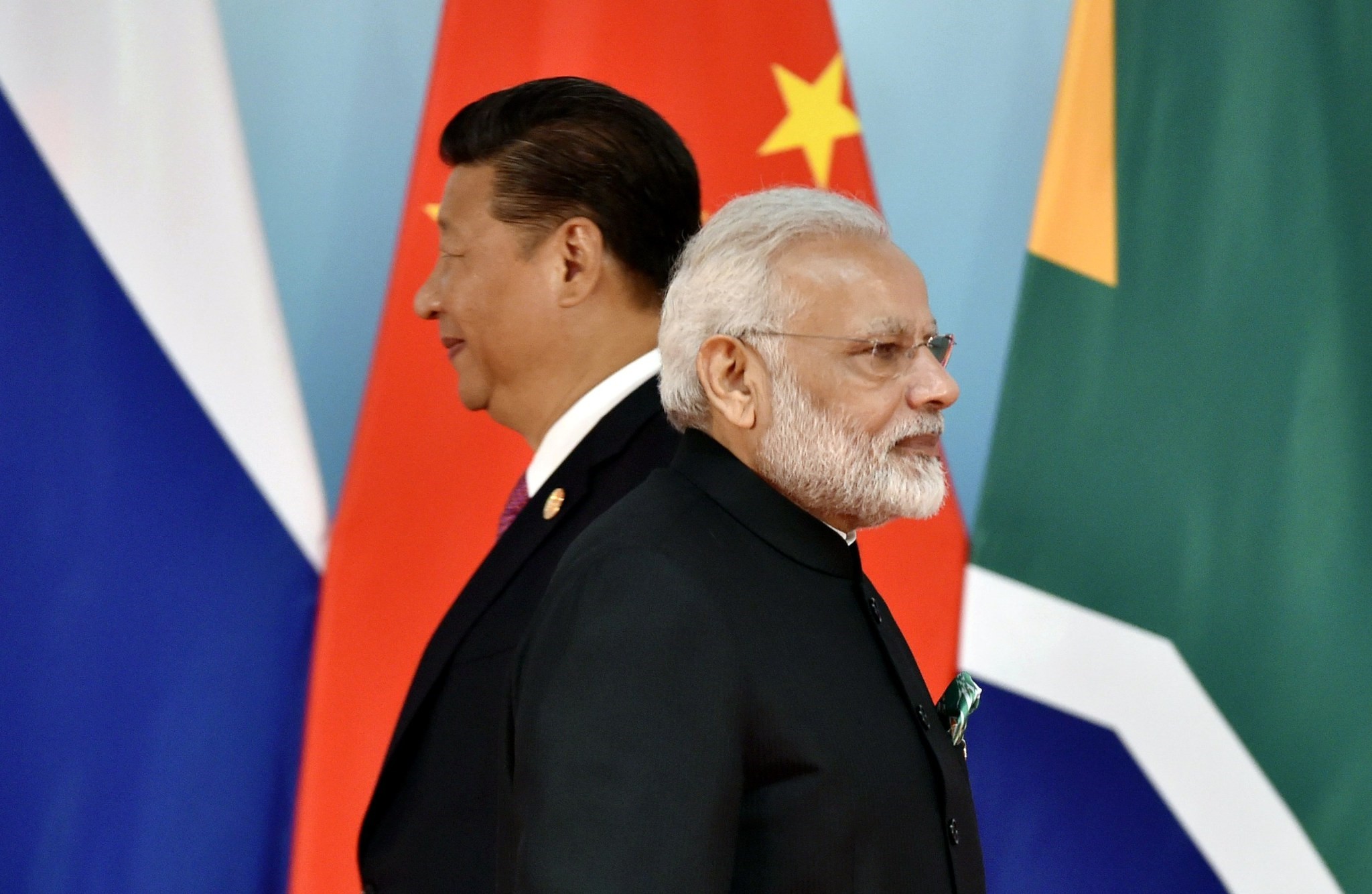 Chinese President Xi Jinping (L) and Indian Prime Minister Narendra Modi walk past each other as they attend a group photo session during the 2017 BRICS Summit in Xiamen, the Fujian province, China, Sept. 4.
by Abu Zafar Sep 06, 2017 12:00 am

Hopefully, the BRICS summit in Beijing will provide Indian and Chinese leaders opportunity to reach a common understanding, build strong bilateral relations and stop the dispute over the Doklam plateau

Finally, India and China, the two great neighboring countries and rising powers in Asia, have agreed to withdraw their troops from the Doklam Plateau at the tri-junction of India, China, and Bhutan after more than a two-month standoff. The recent conflict started on June 16 when Indian troops tried to stop China's People's Liberation Army (PLA) from constructing a motorable road in the area. After that both India and China mobilized more soldiers and weaponry in the disputed border area asserting their claims to it. After two months of an intense media war between the two countries on their prime time TV shows and newspapers, the international community was anxiously waiting and watching to see a negotiated outcome. Only a few days ago, the United States offered its "help" to resolve the crisis.

India's National Security Advisor Ajit Doval met top Chinese leaders, including Chinese President Xi Jinping on the sideline of the BRICS security advisors meeting in China on July 27-28, which was widely considered an attempt to prevent the situation from escalating and to start dialogue. On Aug. 28 both India and China issued separate statements claiming to have reached an understanding and interpreting it as their victory. China asserted that it will continue to safeguard its territorial sovereignty in the area. The Indian statement announced that an 'expeditious disengagement' has been agreed followed by China's statement that India "has pulled back all the trespassing personnel and equipment to the Indian side of the boundary." China further asserted that it "will continue to exercise its sovereignty and uphold its territorial integrity in accordance with historical conventions."

The dispute on Doklam plateau

Doklam plateau has strategic importance for all three countries – China, Bhutan, and India. The issue is: Where is the actual tri-junction located and where do the boundaries of all three countries meet? India and Bhutan believe that a place called Batang La is the tri-junction but China contests that it lies a few kilometers more to the south at a place called Gimpochi (Gyemo Chen). The distance between Batang La and Gimpochi is about 7 kilometers. From Gimpochi the Zompelri ridge starts and this ridge is only 20 km from India's Siliguri Corridor.

The Siliguri Corridor is very important for India. It is a thin line and the only land route to connect seven north-eastern Indian provinces with the other part of the country through the West Bengal province. This route has significant importance for India and major road and rail networks pass through it. Sikkim province that borders with China is also one of these seven provinces and it is also the only way for troop mobility to the Indo-China border, where the current stand-off is taking place.

It was June 6, three days before the meeting of Prime Minister Narendra Modi and Chinese President Xi Jinping in Kazakhstan's Astana on the sidelines of the Shanghai Cooperation Organisation summit, when tension started in the border area because two Indian bunkers were demolished by the Chinese army at Doka La. Just 10 days later, on June 16, the Chinese army was spotted with bulldozers and earth moving machines to start building a road near Dolam plateau in the Doklam area. Bhutanese army personnel from their post in Chela went to the spot to stop them but failed. Meanwhile, Indian soldiers arrived from Doko-La post and physically stopped the PLA.

Since then, the troops of two Asian powers were eyeball to eyeball on the ground. Though the diplomatic channel was busy to lower down tension, China has repeatedly asked India to withdraw Indian troops from the site as a precondition for any meaningful talk.

"It is very clear who is right and who is wrong regarding this issue, and that even Indian senior officials have publicly said that Chinese troops have not intruded into Indian territory, which means that India admitted that it has entered into Chinese territory. The solution to this issue is simple, which is that the Indian troops back out honestly," China's Foreign Minister Wang Yi told reports in Bangkok on July 24.

Furious with India's reaction, on June 20, China also announced the cancellation of the Kailash Mansarovar pilgrimage through Nathu-la border in Sikkim.

India and China share a 3,488 km long border and interestingly the Sikkim border is the only border where there is no dispute and the boundary is delineated with mutual understanding. The relation between the world's two most populous neighbors is about 2,000 years old, and can be defined as historical, economic and territorial. The ancient roots of the Sino-India relations can be traced to Buddhism and trade that are relevant even today as well. About seven decades back, when Communists took over in China and India got its freedom from the British, the then leadership of the two countries agreed to follow the five principles of peaceful co-existence or Panchsheel. But the two nations have fought a full war and some brief confrontations on several occasions. India has been sheltering the Tibetan government in exile led by the Dalai Lama who, along with hundreds of Tibetans, has been staying in India since 1959 after the Chinese forces took over Tibet in 1950. China also controls parts of Kashmir, Aksai Chin, and a small territory Pakistan ceded to China, both claimed by India as part of its Jammu and Kashmir province.

These unresolved irritants notwithstanding, the two powerful countries have developed a strong cooperative relationship that makes them very important for the global economy and security. The two powers resist Western policies in all international forums, particularly in financial institutions to defend third world economies. The two countries have also developed a powerful economic block, the BRICS, which includes the big economies like Brazil, Russia, and South Africa. India has recently become a full member of the Shanghai Cooperation Organization, which is considered an alternative to the Western security regimes. The two countries share an understanding on many important international issues including Middle Eastern conflicts, climate change and WTO Trade negotiations.The real rivalry between India and China originates from their bilateral trade where India wants to bridge the huge trade deficit with China in their 70 billion bilateral trade. India has been demanding China allow Indian companies to work in China. Given the size of their populations, their rapidly growing economies, their increasing technological capabilities, the Asian countries are worried of any military confrontation that could destabilize not only Asia but also the entire global economy.

India's main concern is China's proposal to build a road that it plans to construct through Doklam without taking the bordering countries in confidence. It will shorten the distance from the tri-junction to India's Siliguri corridor, also known as the Chicken Neck.

China scaled up basic infrastructure development in Tibet and along the Indian border. This includes not only roads and highways but also the extension of the Beijing-Lhasa high-speed railway line to Yadong which is not very far from Doklam plateau. This project is almost completed and the trial is said to begin within two years.

Bhutan and India enjoy a special relationship defined by a friendship treaty both countries signed in 1949 and updated in 2007. The treaty requires that neither government shall allow the use of its territory for activities harmful to the national security and interests of the other.

Bhutan does not have a diplomatic relationship with Beijing and after the recent incident, on June 29, the Bhutanese government accused China of direct violations of the agreements of 1988 and 1998, which state that all parties will maintain the status quo as before 1959 unless the boundary issue is resolved.

"Bhutan has conveyed to the Chinese side, both on the ground and through diplomatic channels, that the construction of the road inside Bhutanese territory is a direct violation of the agreements and affects the process of demarcating the boundary between our two countries. Bhutan hopes that the status quo in the Doklam area will be maintained as before 16 June 2017," an official statement from Bhutan government on June 29 reads.

After meeting Indian External Affairs Minister Sushma Swaraj on Aug. 11 in Kathmandu, Bhutanese Foreign Minister Damcho Dorji told the media, "We hope the current standoff in Doklam will be sorted out peacefully."

China says that the area where the road construction is going on, is disputed between China and Bhutan and they tried to solve the issue through 24 rounds of talks. The last talk took place in August last year. There are 764 square kilometers of Bhutanese territory that is claimed by China. China thinks that the area belongs to its territory and blames India for interfering in an affair that has nothing to do with it. The Sikkim border of India is demarcated and there is no dispute between the two countries. China conveniently cites the Anglo-Chinese Convention, which was signed between British India and the then Qing dynasty in China, and says that successive Indian governments also agreed on it.

In 1996, China offered to resolve border issue with some give and take principle but Bhutan rejected it and in 1998 both countries signed a peace agreement to 'maintain peace and tranquility on the Bhutan-China Border Areas'. In 2012 both India and China in their special representatives' meeting agreed to determine the tri-junction all three countries must part of the consultation process.

China is outraged by India's 'interference' and 'trespass' in the territory of Bhutan and termed this attempt as a violation of international law. Chinese Foreign Ministry spokesperson Lu Kang took a jibe during a routine press briefing when he talked about Indian troops coming into Bhutan's territory.

"I hope countries can respect the sovereignty of the country (Bhutan). The China-Bhutan boundary is not delineated, no third party should interfere in this matter nor make irresponsible remarks or actions," Kang has said.

Amid media reports saying that both sides have started building a heavy military presence in the disputed area, the Indian Minister's statement saying "war is not an option for India" has cooled down the conflict significantly. "No solution will be gained out of the war because even after the war, talks are required. A solution cannot be derived out of the war," she said in the parliament. Regardless of frenzied media coverage from both sides, the two governments remained in close contact and maintained restraint allowing more constructive consultations at all levels. The worst scenario seems to have passed, paving the way for the leaders of the two countries to sit together and build more confidence when they meet in September to attend the BRICS summit in Beijing and G20.