Las Vegas massacre not the first, not the last 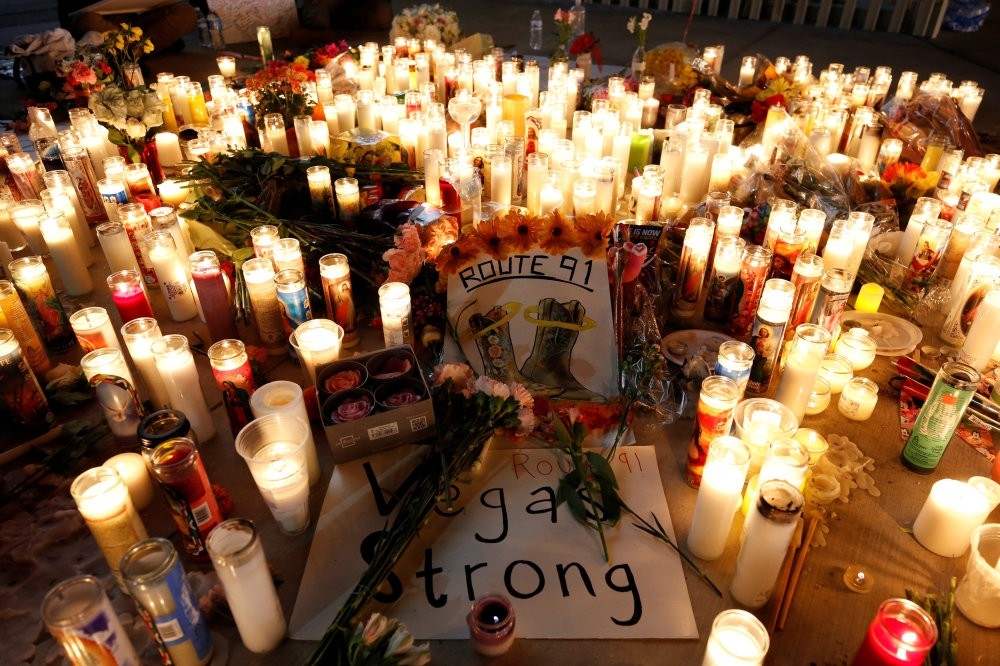 A candlelight vigil on the Las Vegas Strip following the mass shooing at the Route 91 Harvest Country Music Festival in Las Vegas, Nevada, Oct. 2.
by Karel Valansi Oct 07, 2017 12:00 am

While mourning the victims of the horrific attack, America must confront its own problems and stop postponing the inevitable discussions and decisions to solve the gun violence that ravages the country

A disturbed man pulled the trigger in Las Vegas last Sunday night. He rained bullets down from a hotel room window on the 32nd floor of a nearby hotel into a country music concert killing at least 59 people and injuring 527 others.

His name was Stephen Paddock, a 64-year-old man from Mesquite, Nevada. He opened fire on masses of people with no apparent reason. According to his brother Eric Paddock, he was an ordinary guy living in a quiet retirement community with no religious or political affiliations. However, he fired rounds of ammunition into the crowd and killed himself when the police located him.

The videos circulating on social media show the nightmare the people were experiencing. The panic in the concert area, the sound of automatic gunfire and the cold blooded attack reminded us again that nowhere is safe anymore. These are scenes that one would prefer to close their eyes to while watching a blockbuster movie. Knowing that it is the reality and that could happen to anyone of us at a concert, football game, nightclub, restaurant, wedding party or just walking by the beach is a harsh reminder of the power of terror and how it disturbs our lives forever.

Paddock did not blink an eye while repeatedly pulling the trigger. The bullets raining from the sky ended lives and destroyed families in every sense. It seems that there is no political or ideological motive or objective for this assault. It was an act of pure evil, as U.S. President Donald Trump has called it. It is an act of terrorism. It uses violence that is intended to cause bodily harm or death to the public. This is how Nevada state law defines terrorism. And the Oct. 1 Las Vegas shooting was the deadliest mass shooting in modern American history. It is the worst attack in the U.S. since Sept. 11, 2001. This is how last night's attack is described in the United States.

After similar horrific terrorist attacks, people gather at the scene of the attack to remember the victims and leave flowers and candles in their memory. People share their thoughts on social media as soon as the first shock is passed. We have unfortunately seen many #PrayFor hashtags in recent years with different city names. As for the states, they lower their flags in respect of the victims, offer a moment of silence and a day of mourning. The discussions on the reasons of the attacks and how it could be prevented stay under the shadow of the sadness and pain that surrender us. Then, we all return to our daily lives until the next big attack.

It is sad to say, but people were ready to accept that the killer was affiliated with a terrorist organization, was an immigrant or a Muslim. It could have been easier to blame a faith, a culture or society. Now, Americans have to turn into themselves to find the motives of the killer and the root causes of the attack.

The truth is simple. He was an overly armed, dangerous, probably mentally unstable and perhaps premeditated man.

As millions pray for the victims, discussions about gun control laws resurface. The U.S. has the highest rate of gun homicides of any developed nation. Nongovernmental organizations raise their voices against the existing laws that permit even an 18-year-old to possess guns when they cannot drink alcohol until the age of 21 – age 18 – although possessing a firearm necessitate greater ability to act responsibly.

Another issue is tighter security at public events. This is a reality that security conscious societies like Turkey experience everyday. There are security controls in malls and public gatherings. In Las Vegas, however, everything is open and freely accessible – malls, casinos, museums, hotels. In the age of terrorism, this ease of getting around makes the city an easy target, especially when there is such easy access to guns.

Mourning the victims of the horrific attack, America must confront its own problems and stop postponing the inevitable discussions and decisions to solve the gun violence that paralyzes the country. Radical and brave steps are necessary for the sake of its citizens in order to prevent another similar attack.