Turkey's 'near abroad' in the Black Sea: Ankara's predicament between Kiev and Moscow 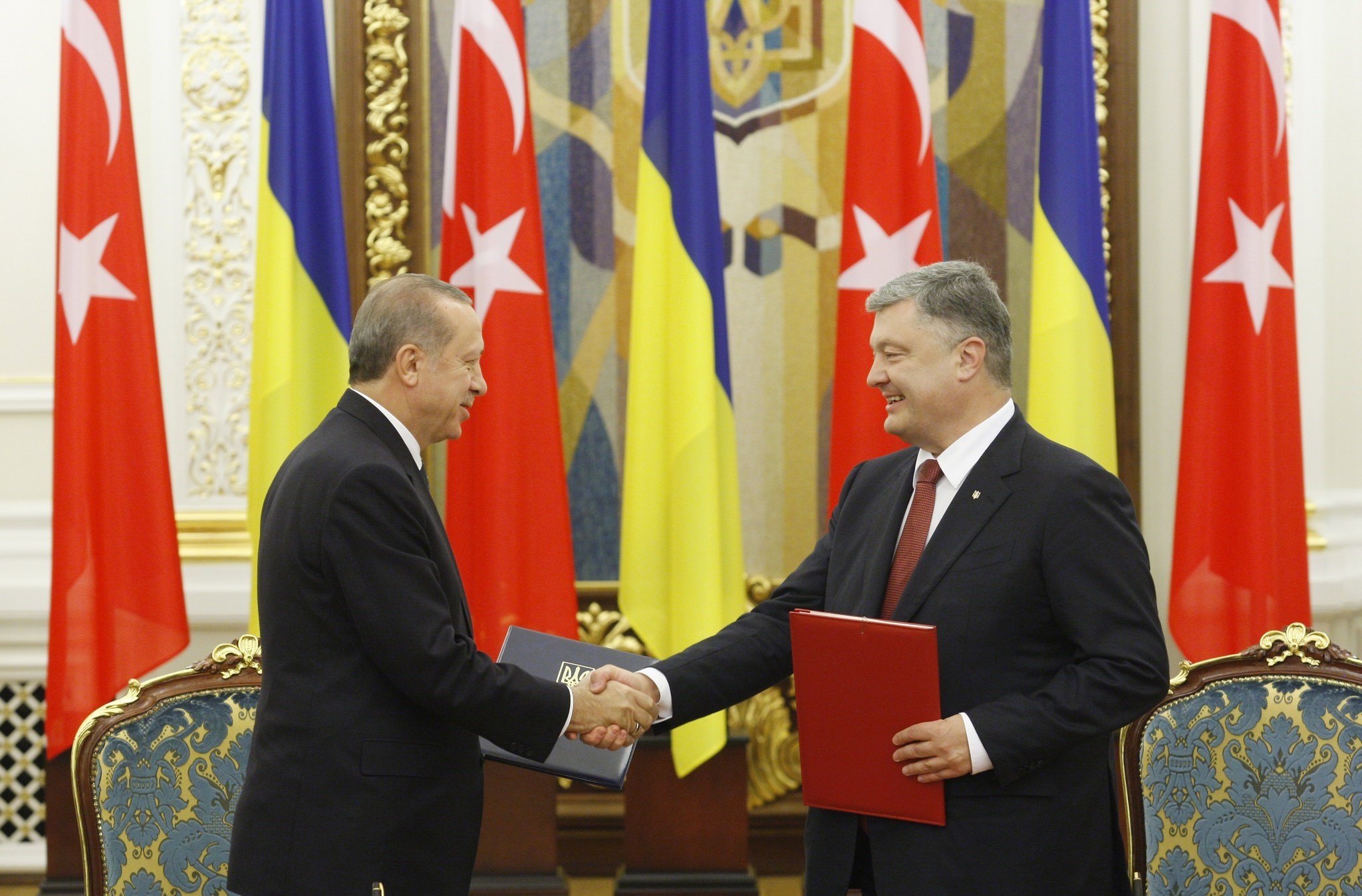 As Turkey's partnerships deepen with both Ukraine and Russia, Ankara can also mediate the soothing of the tension between two former brotherly countries

As the diplomatic ties were set 25 years ago, Turkey's relationship with Ukraine was not quite different than any other post-communist country in Eastern Europe. However, in the course of time, both countries have succeeded to become each other's "near abroad," which led to the establishment of a high level of strategic partnership in 2011.

President Recep Tayyip Erdoğan visited Kiev Monday to attend the 6th intergovernmental high-level strategic council meetings with the Ukrainian side, chaired by President Petro Poroshenko. After the meeting, the parties have further pledged to deepen bilateral political and economic ties as a necessity of the strategic partnership, which aims to unite the opposite shores of the Black Sea.

Turkey emerges as a vector in Ukraine's geopolitical conundrum

As the two main littoral states around the Black Sea, Ukraine and Turkey expect an enhanced cooperation should bring peace, stability, and security in the basin despite the increasing risks of geopolitical and military tensions between the East and West. Ukraine itself has already been a victim of those tensions when Russia annexed Crimea in 2014 via a fait accompli referendum in the peninsula, as well as meddling in internal conflicts in the Donbass region.

Although the conflicts in East Ukraine have been left frozen in line with the Minsk Accord, the sporadic violence still puts a prospective challenge to the territorial integrity of the post-Soviet country.

While the self-proclaimed republics in Donetsk and Luhansk remain a source of military tension inside Ukraine, the Crimean issue continues to feed the public discontent with serious anti-Russia sentiments, particularly in the west of the Dnieper River which historically and ethnically divides the country.

No doubt, Ukraine's de facto loss of Crimea to Russia has moved Kiev away from Moscow, an opportunity which was seized by the West to crumble the conventional Russian influences and reserves in and around Eastern Europe.

For the time being, Ukraine's leadership has tended towards the West in terms of political, economic and security cooperation, but Russia has not yet forsaken the country from its geopolitical heartland. From a historical point of view, Kiev is the oldest center of the Russian statehood and a holy place where Eastern Slavic tribes were first organized under the power of the Rurik Dynasty and baptized in the Orthodox faith.

Russia's neo-conservative leaders, first and foremost President Vladimir Putin himself, heed such a historicity more than the glorious Soviet past. Therefore, Ukraine's importance in Russia's current Eurasianist foreign policy will remain a geopolitical and security priority at a time when the NATO alliance has been bolstering its military presence in the formerly Soviet countries neighboring Russia on its western flank.

Ukraine's recent bitter experiences between Russia and the West have produced a zero-sum game for its realpolitik and shown that Kiev needs to return to a multi-vector foreign policy, which is associated with the country's longest-serving President Leonid Kuchma.

In this sense, a multi-vector foreign policy entails Ukraine to set a balanced diplomacy between Moscow and the Western capitals, as well as requires the diversification of its foreign relations in the south and Turkey seems to be the only country that can help Ukraine open up to the Middle East, Africa, the Caucasus and Central Asia.

From this angle, it is easy to make sense of the increasing strategic partnership between Kiev and Ankara. Such cooperation has also yielded good results in bilateral trade as Turkey became one of Ukraine's top five commercial partners in recent years.

Both Presidents, Erdoğan and Poroshenko, agreed to further boost commercial transactions and double the current $10 billion foreign trade over the next decade. The parties are now negotiating a free trade agreement to achieve these goals. Ukraine's population of more than 45 million and Turkey's own demography can inspire a trend of continuous investments between the two countries.

On the other hand, Turkey has long been a guarantor of the Bosporus and the Dardanelles straits as well as the Black Sea maritime route which are the valves of security for the littoral states. In this aspect, Ukraine and Turkey's military, economic and environmental securities are interconnected.

In this regard, the annexation of Crimea is a security concern not just for Ukraine; it is also a military challenge for Turkey, given Russia has a history of using Crimea as a naval base to launch attacks on Ottoman territories.

Erdogan reiterated Ankara's commitment to Ukraine's territorial integrity by referencing to Crimea and the Donbass region in his press conference with Poroshenko, who, in return, addressed the unpleasant situation of the Tatar minority in the seized peninsula.

Needless to say, all these issues will continue to further approximate Kiev and Ankara in the near future as the parties enhance cooperation and confidence-building measures in the region.

However, Russia's "primus inter pares," or first among equals status in relations with Turkey seems a tacit source of discontent on the Ukrainian side, which has already expressed disappointment with Ankara's reluctance on the Western economic sanctions imposed on Moscow since late 2014.

Moreover, Russia and Turkey are determined to increase the level of bilateral relations from a commercial to strategic partnership since the parties swiftly mended the ties after the 2015 jet crisis. Both Erdoğan and Putin vowed to move forward the relations as the Russian president visited Ankara last month.

Yet, Turkey wants to settle a well-balanced diplomacy between Ukraine and Russia, which are now at odds, but nevertheless open to a dialogue for a prospective rapprochement.

Although the Crimean issue has been a focal point in relations between these three countries, the Tatar people historically connect them with each other. While Turkey's imperial past in the south of Ukraine, which was ruled by the Crimean Khanate on behalf of the Ottomans for centuries, opens some cultural and communication channels, Russia's up to 25 million Muslim and Turkic minorities also constitute a common ground of policy-making between the parties.

In this context, Turkey's relations with both Ukraine and Russia have tripartite dimensions in which natural reasons force the countries to come together around a table for the negotiation of mutual problems.

Turkey and Russia's recent initiatives have produced such a ground of common understanding and conflict-resolution regarding the regional issues, most particularly in Syria. Moscow and Ankara have taken the lead in the Syria peace process and moved the negotiations from Geneva to Astana. The Astana Talks have so far produced some good results towards ending the bloodshed in war-torn Syria.

One might assert that the motivation behind the recent Turkish-Russian partnership is this current security cooperation rather than the lucrative commercial businesses. That is to say, as much as this security cooperation is extended into the future, the parties can also reach the long-anticipated $100 billion thresholds in foreign trade.

Under these circumstances, the parties, including Ukraine, need to sit together in order to augment security cooperation in a wide region, consisting of the Balkans, Eastern Europe, Black Sea and the Caucasus. No doubt, these areas are said to be a "domain reservoir" or hinterland, especially for Russia and Turkey's geopolitical means, but the two can transform those means into realpolitik gains with the participation of Ukraine, a country that is long-fatigued due to the devastating conflicts in the east and very disappointed by its relations with the West, likewise its southern neighbor Turkey.

Ukraine has recently got the visa-free regime with the European Union (EU), but the country's hopes were dimmed after several EU countries, such as Germany, France, Austria, Belgium and the Netherlands objected to Kiev's bid to join the Union in the medium term. Hence, Ukraine will need to increase cooperation with Turkey to stand firm against the never-ending orders and conditions of the EU, whereas it should also need to ease tension with Russia, considering NATO's military presence in its territories, particularly in the Black Sea.

The Kremlin has clearly emphasized that Moscow severely rejects Kiev's proposed membership in the Euro-Atlantic alliance and has several times reminded of the red lines on the issue by referring to the negative example of Georgia.

When the Georgian leadership under the then presidency of Mikhail Saakashvili, who is now a controversial opposition figure in Ukraine, invited the Bush administration to extend the U.S. influence beyond the Black Sea and the Caucasus, Russia used immediate force in Georgia in August 2008. In doing so, Moscow pre-emptively obviated Washington's expansion in the region as it left behind the two breakaway republics of South Ossetia and Abkhazia, crippling Georgia's territorial integrity since.

In the Ukrainian example, Russia is pursuing a wait and see strategy and has frozen conflicts in eastern Ukraine as a negotiating bargain, or more correct to say, as a stick diplomacy to keep the government in Kiev in its security orbit.

As Turkey's partnerships deepen with both Ukraine and Russia, Ankara can also mediate the soothing of the tension between the formerly brother countries. But, both Turkey and Ukraine also expect Russia to fulfill some requirements, particularly Moscow's respect for the Ukrainian territorial integrity. Though the international law still assumes Crimea as a part of Ukraine, it seems that the return of Crimea is very unlikely since Russia has been very adamant on the issue so far.

Nevertheless, Russia will have to stop fueling the conflicts by assisting separatist militias in eastern Ukraine. If the Syrian model works, Turkey and Russia can also negotiate conflict resolution in Ukraine with the necessity of finding solutions to the regional problems from within the region's realpolitik perspectives.

One of the prerequisites of this broader cooperation is also the new status of the Crimean Tatars, whose basic rights and properties have allegedly been confiscated by the Russian state. This issue is very sensitive and open to exploitation, either by all three countries or by fourth parties as it has potentials to spoil the tripartite relations.

So, aside from being territorially seceded by Russia, Crimea's Tatar minority will remain a headache in the diplomatic relations in years to come unless Russia ameliorates living conditions and civil liberties of its new citizens. It will also render meaningless the ideas of aforementioned strategic partnerships which are now leaned on the reciprocal commercial pragmatism among Turkey, Russia, and Ukraine.

In brief, the region has some rocky roads ahead, as efforts to solve the current military and humanitarian crises in Syria and Ukraine will be a litmus test not only for the Turkish-Russian relations, but also for the whole regional security complex in the Middle East and Eurasia.

* Eurasia Analyst, also works as a journalist for TRT World.