On the centenary of the Bolshevik Revolution 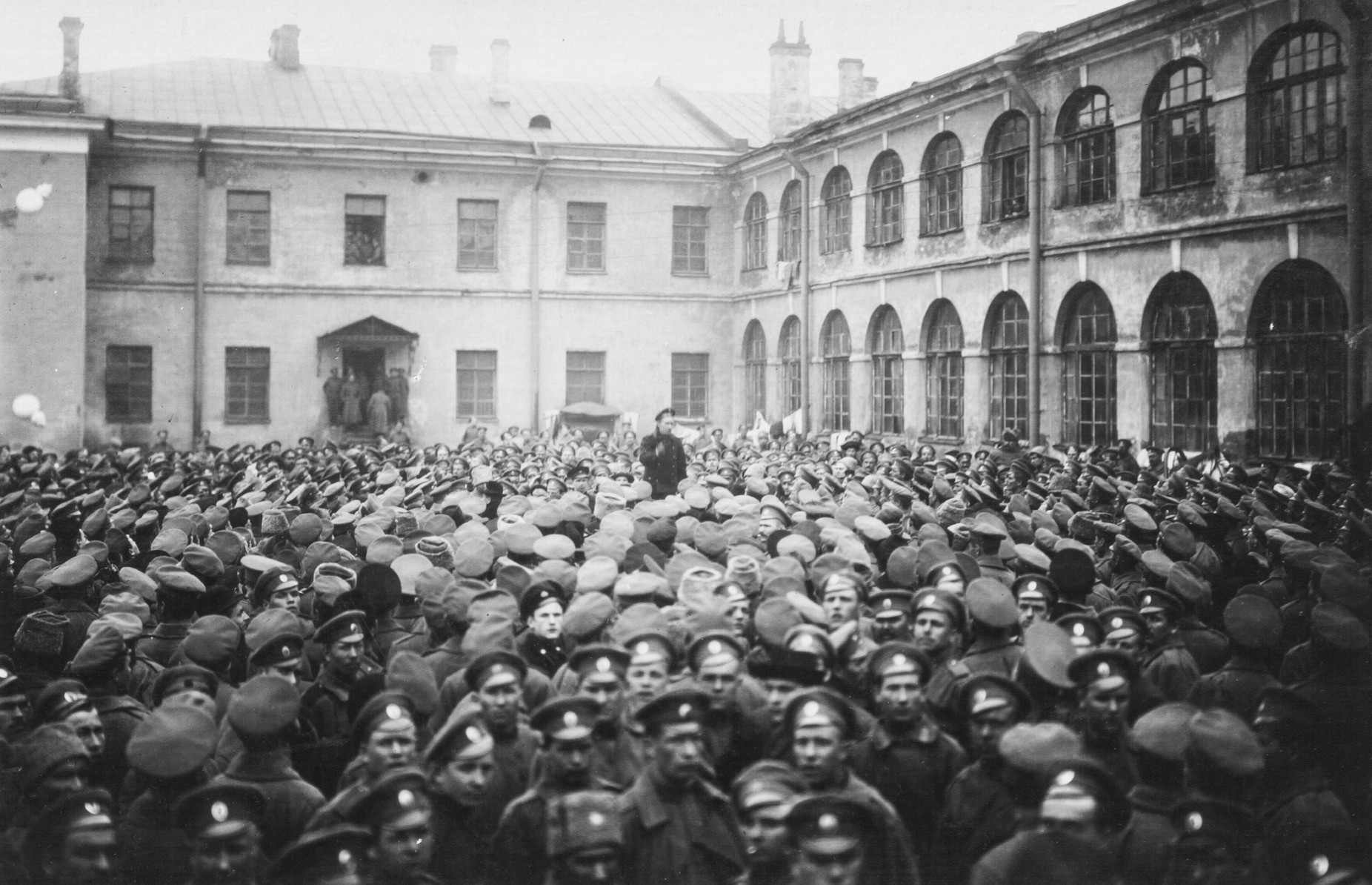 Soldiers of the Grenadier Regiments wait for Lenin's arrival on the parade ground near the barracks in St. Petersburg, Russia, October, 1917.
by Şener Aktürk
Nov 07, 2017 12:00 am

The October Revolution in 1917 changed the course of modern Russia, leaving behind many lessons to learn and think about

Today is the 100th anniversary of the Bolshevik Revolution, also known as the October Revolution or the Russian Revolution. This is a good opportunity to reflect on this world-historical development and its consequences.

We have to briefly address a chronological curiosity first. Why is it known as the October Revolution if it took place on Nov. 7, 1917? Russia used the Julian calendar at the time, and the revolution occurred on Oct. 25 according to the Julian calendar, which corresponds to Nov. 7 in the Gregorian calendar currently in use in much of the Western world, including Russia and Turkey. For the same reason, the first revolution of 1917, which took place on International Women's Day, which is actually March 8 in the Gregorian calendar, is known as the February Revolution.

Was the Bolshevik takeover a revolution?

The answer to this question depends on one's definition of a revolution. If revolution is elite change, then the Bolshevik takeover was certainly a revolution. A radical underground faction of outsiders, cosmopolitan and multiethnic in their composition, usurped power in the capital of the tsarist Russian Empire. In this process, they killed the entire Romanov dynasty – rumors of Anastasia Romanov's survival notwithstanding – and many other members of the elite died fighting on the side of the White Army in the Russian Civil War following the revolution. Hundreds of thousands of people who were Russia's aristocratic, bourgeois, cultural and intellectual elites left the country, many of them fleeing to Western countries via Berlin and Istanbul. This is one reason why there have been numerous artistic and literary figures of Russian origin in Western Europe and in the United States, e.g., Vladimir Nabokov, Ayn Rand, since the interwar years.

If revolution is social change, then the Bolshevik takeover should also count as a revolution since it radically changed Russia, for better or much worse, in a way that was hitherto unthinkable. Before the revolution, Russia was an overwhelmingly peasant society. Millions of peasants died or were killed during the collectivization of agricultural land under Stalin. The first Five Year Plan from 1928 to 1932, also the first of its kind in world history, aimed at rapid industrialization. Similarly, before the revolution, Russia was a bastion, and arguably the global center, of Orthodox Christianity, and a fairly religious society. Tsarist Russia also had more Muslims than the Ottoman Empire at the time and more Jews than any other country in the world. In contrast, the new regime adopted militant atheism as its official policy on religion and closed down a great majority of churches, mosques, synagogues and other houses of worship. Perhaps most symbolically, the Church of Christ the Savior in Moscow, the largest church in all of Russia, was blown up on Dec. 5, 1931. Thus, an overwhelmingly peasant and religious society became mostly urban and living under an officially militant atheist state by the time of Nikita Khrushchev. If revolution is regime change, then the Bolshevik takeover was certainly a revolution, since it definitively changed the political regime type from constitutional monarchy to a one-party (proletarian) dictatorship.

In contrast, however, if one thinks revolution means the coming to power of a new government that is representative of the most popular demands and wishes of the majority of the population, then the Bolshevik takeover was most certainly not a revolution. Bolsheviks were an unpopular, clandestine, radical ideological party or faction with minuscule support among the masses. They were somewhat popular in the largest cities of Moscow and St. Petersburg where the revolution happened, among some intellectuals, industrial workers and critically among soldiers, because they promised an immediate end to the war in de facto surrender. In this sense, the so-called Bolshevik Revolution of 1917 very much resembles a military coup supported by a tiny radical intellectual faction.

Who were the Bolsheviks? According to Yuri Slezkine, the author of the recently published "The House of Government: A Saga of the Russian Revolution," the "Bolsheviks were a millenarian sect formed in the expectation of a world revolution." In this sense, Bolsheviks are indeed comparable to many messianic millenarian religious cults or sects in history. There might be many such far-left sects and clandestine factions across Europe and elsewhere in the world, but the Soviet Union became the "first socialist society," to use the title of Geoffrey Hosking's famous book. Also critically, the Soviet Union was unlike other nation-states, inherently limited to one segment of people, but instead was similar to empires, unlimited and aspiring to include all people. As Khrushchev would later formulate the definition of a Soviet people/nation, Soviets saw themselves as a new historical community of people that was unprecedented in human history and an image of the future. Bolsheviks tried to transform human nature and society in many ways, and one can conclude that they failed, at least in part. The fact that most leading Bolsheviks discarded their original names, i.e., their Christian, Jewish or Muslim names, and took completely new revolutionary names is only one dimension of this transformation. Thus, Vladimir Ilyich Ulyanov became Lenin, Yosif Vissarionovich Dzhugashvili became Stalin and Lev Davidovich Bronshtein became Trotsky. 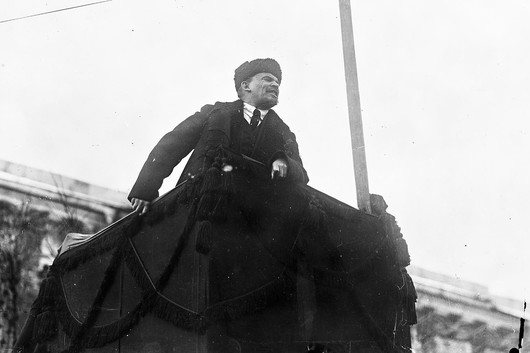 Can we attribute all the alleged good deeds of the Bolshevik regime to Lenin and all of its crimes to Stalin? This was a popular line of argument among sympathizers and fellow travelers of the Bolsheviks, and especially among Trotskyites in the West. Even the plot of the very popular fable of the Bolshevik Revolution, George Orwell's "Animal Farm," suggests that the revolution of the pigs against humans could have followed a more egalitarian, democratic path if Snowball, i.e., Trotsky, succeeded Old Major, i.e., Lenin, instead of Napoleon, i.e., Stalin. However, the Bolshevik regime had already become totalitarian during Lenin's lifetime. Opponents were killed, rival parties were banned and in the 10th Party Congress of 1921, different factions within the Communist Party of the Soviet Union (CPSU) were banned. Lenin, Trotsky, Stalin, Lev Kamenev, Grigory Zinoviev and many others together built the proletarian, one-party dictatorship after 1917, a task that was already accomplished before Lenin's death in 1924.

Was the October Revolution good for Russia?

For the average citizen, the Soviet Union could hardly be considered a positive development. Tens of millions of civilians were killed by the Soviet state, millions of others were imprisoned and many ethnic groups were decimated through mass deportations, e.g., Volga Germans, Crimean Tatars, Chechens and Meshketian Turks. St. Petersburg in 1910, the capital of a constitutional monarchy with an elected parliament, was comparable in its pluralist and quasi-democratic atmosphere to Istanbul, the capital of a rival constitutional monarchy with an elected parliament. In contrast, the Soviet Union in the past and the post-Soviet Russian Federation have been much less democratic, less pluralist and much more authoritarian than Turkey. What a difference a century of competitive multiparty politics makes.

Perhaps even more depressing are the economic outcomes. Despite millions of people having been killed for the sake of rapid industrialization and agricultural collectivization under Stalin, aside from the military industry, Russia today does not produce any globally competitive goods. This is in great part because other than the military industry and space technology sectors where the Soviet Union was in fierce competition with the United States, other Soviet industries, i.e., consumer durable goods had a domestic monopoly in the Soviet Union and did not have to improve for competition with the rest of the world. Post-Soviet Russia has a natural resource-dependent economy, with the export of natural gas being its primary source of foreign exchange. Soviet industrialization produced minimal benefits, despite massive human costs. 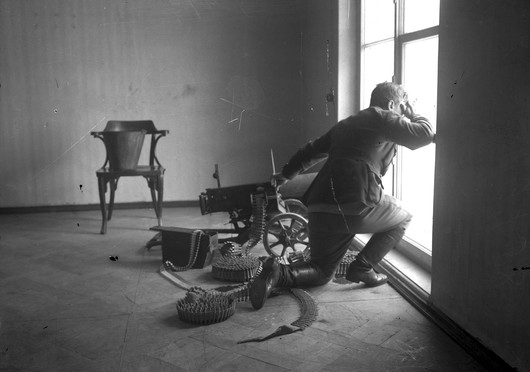 A machine gunner looking through a window at his position near the Kremlin, Moscow, Russia, October 1917. (AP Photo)

Despite the massive human costs summarized above, the Soviet experiment may have been good from a strictly statist point of view. While the Habsburg and the Ottoman Empires collapsed and Austria, Hungary and Turkey do not even control one-fifth of former Habsburg or Ottoman territory, respectively, the Soviet Union was able to bring almost all of the former tsarist Russian territories with the notable exceptions of Finland and Poland under its control. Even today, the Russian Federation has three-quarters of former Soviet territory, including 21 autonomous ethnic republics. Likewise, although individual citizens suffered, and although their living standards did not necessarily catch up or surpass comparable neighbors, the Soviet Union was able to build up a military that could withstand the Nazi German invasion and compete against the United States worldwide thereafter.

Contrary to Khrushchev's proclamation in 1961 that the Soviet economy would surpass that of the United States in 20 years, the Soviet economy already stopped growing and began to decline by 1981. Moreover, even pro-American postwar Japan, a very tiny country compared to the Soviet Union, was able to surpass the Soviet economy by the 1980s. The world revolution that the Bolsheviks expected never came, and to the extent that there were communist revolutions, they were not in advanced industrialized countries, but in Africa, Asia and Latin America. These were all humiliating facts for a state and society that viewed itself as the next stage in the evolution of humankind and the image of the future. In the end, the Soviet Union could not survive more than 75 years. There are many lessons to be learned from the Soviet experiment as such.