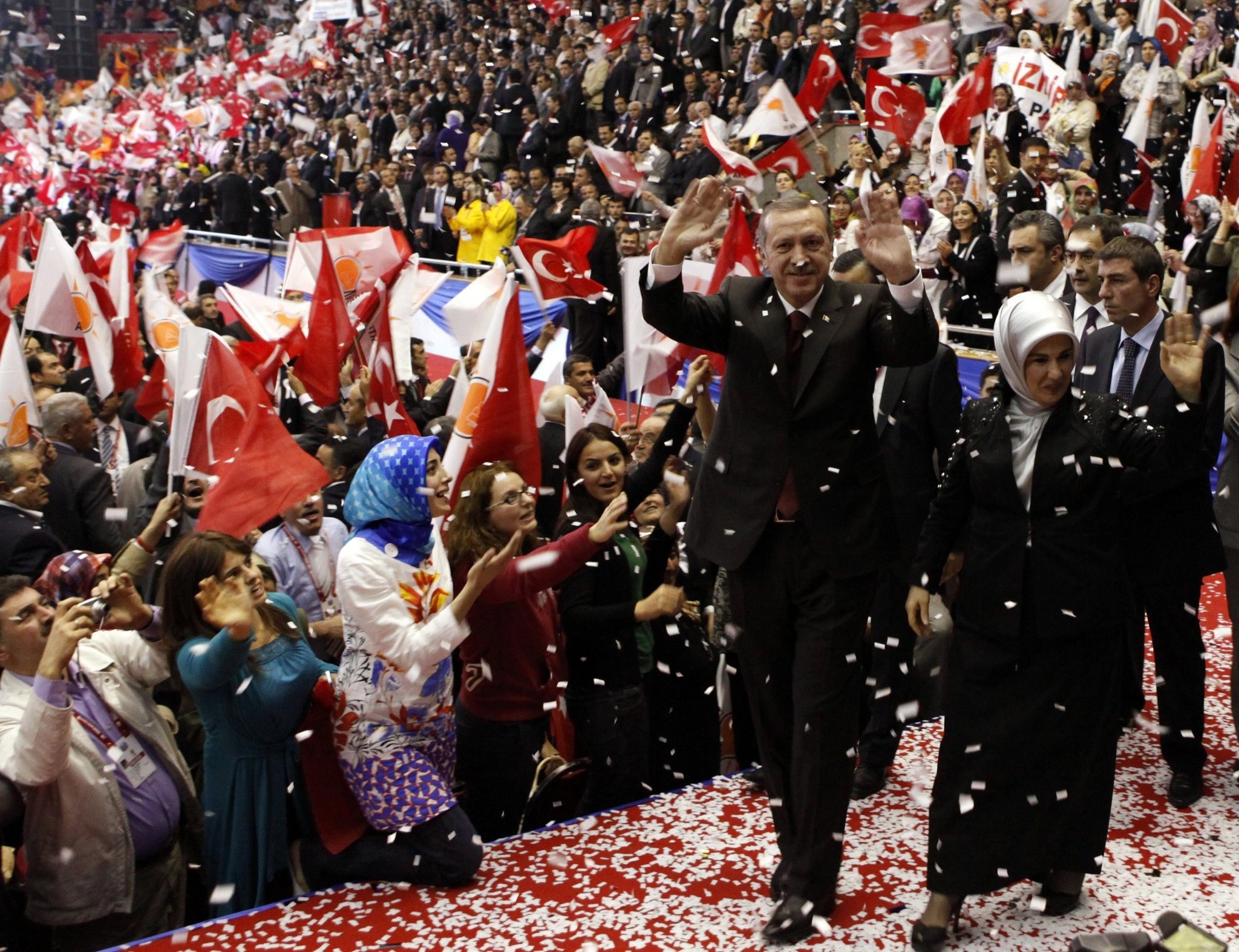 Turkey has passed through four elections and a referendum in the last three years, resulting in almost 24 million voters supporting the Justice and Development Party (AK Party) and its platform. This is the highest vote share the party has received in its history as well as for any party in Turkey's history. For the April 16 referendum, with 1.7 million more votes in favor of the constitutional changes, the party was again on the winning side.

This is a case that can hardly be understood by or make sense for European and Western circles. Many academics, journalists, politicians and diplomats ask the same question of why large portions of the Turkish electorate maintain support for the AK Party.

What is the AK Party's motto?

One of the main components of the AK Party is its election manifestos and political promises, which have always been on social policy issues. In fact, its concern with welfare policies extends to before the emergence of the party. Many AK Party political figures, including President Recep Tayyip Erdoğan, started their political careers as mayors or in local politics. In their local governing experiences, this political cadre implemented diverse social policies, and as such, convinced the electorate that they could change their lives for the better, first at the local level through municipalities.

The local-level social policy experiments of the AK Party's founding fathers were diverse and extensive. Erdoğan's policies as mayor of Istanbul between 1994 and 1999 are a good example. In this period, Istanbul was involved in a wide range of social policy programs from social housing to student bursaries. With the social housing projects of the municipality-owned construction company Kiptaş, the poorest neighborhoods were transformed into attractive areas, and many poor citizens got the chance to own their first houses. This construction effort was not just symbolic, as even new districts in the city, such as Başakşehir, were created through it.

The Istanbul municipality undertook extensive infrastructure renewal in the Erdoğan era. Water, electricity, gas and highway infrastructure were largely renewed by municipality-owned companies such as İSKİ, BELBİM, İGDAŞ, HAMİDİYE, İSFALT, İETT, İSBAK and ULAŞIM A.Ş. Once, tap water had been only available a few days a week across the megacity. This problem was solved thanks to new dams, pipelines and water treatment plants. Public transportation was largely renewed, and luxury public buses started to reach even the poorest neighborhoods.

Other municipality-owned companies, İSPARK and BELTUR, established several parks, public gardens and recreational facilities across the most disadvantaged districts. These facilities were free or had extremely cheap entrance fees so as to be accessible to all sections of the city's population. The City Theater, Spor Inc. and Kültür Inc. opened sports complexes, cultural arenas and theaters, many in the most disadvantaged districts. The municipality expended daily care facilities, local healthcare centers and soup kitchens for the poor across the city.

As a very symbolic service in the sense of the municipality subsidizing the fundamental expenses of the poorest people, a municipality-owned company, Istanbul Halk Ekmek, is involved in producing the cheapest, nutritious bread in the country and distributing it to all vulnerable parts of the city. The kilometer-long lines of poor people waiting for cheap, subsidized bread sold at Halk Ekmek counters were an oft seen sight in Istanbul in the late 1990s.

Another very symbolic social policy experiment was in education. Under Mayor Erdoğan, the city gave almost 50,000 scholarships and fellowships for students studying in Istanbul to be paid as monthly stipends. Also, by working closely with charities and foundations, the municipality supported dormitories for the poorest students.

All of these were quite distinct social policy experiments, which Turkey was not previously familiar with in local politics. Because of these diverse social policy experiments, the people of Istanbul started to feel improvement in their daily lives directly. If you were an ordinary poor citizen living in the Bağcılar, Sultanbeyli or Ümraniye districts of Istanbul in 1999, you understood directly the positive results of Erdoğan's social policy investments. In this sense, people, especially the most vulnerable sections of society, could see that they were directly gaining from the expansion and deepening of social policies.

The AK Party and Erdoğan as its founding leader played a big role in transitioning these local social policy experiments to the national level later when they came to power and kept considering the great importance of social policies as a tool that touches the daily lives of large numbers of voters. In this direction, after 2002, successive AK Party governments have been involved in several extensive, nationwide welfare reforms from social security to social services and healthcare.

What do reliable statistics say?

The second point is that many voters' perception about the effectiveness of the AK Party's social policies is not just a perception, but also a fact. Through its years governing, the AK Party has not just governed public perception about social policies, but has been involved in major social policy transformations and investments, and these have increased the standard of living of ordinary people, especially of the most disadvantaged. Therefore, it can easily be said that social policy has worked at the national level, too, just as it worked at the local level.

The effectiveness of Turkey's social policies in the past 10 years under AK Party rule is easily detectable when we check only a couple of reliable statistics. Turkey's per capita healthcare expenditure with current public-private partnerships (PPP) has increased from $470 in 2002 to $1,088 by 2016, according to Organization for Economic Co-operation and Development (OECD) statistics. Total pension payments of the country have increased from TL 46 billion ($11.9 billion) in 2007 to TL 185 billion as of 2016. Total public social expenditure as a percentage of gross national product (GDP) has increased from 5.6 percent in 1995 to 9.7 percent in 2005 and 13.5 percent in 2016.

As a result of the increase in accessibility to qualified healthcare and decrease in mortality rates, Turkey's average life expectancy at birth increased to 80.7 for women and 75.3 for men by 2015, from well below 65 for both women and men in the late 1990s. The OECD confirms that in the years following the global economic recession of 2008 to 2011, inequality indicators have shown improvements only in Turkey, Chile, and Mexico.

According to the Turkish Statistical Institute (TurkStat), the Gini coefficient of Turkey for disposable household income has improved from 0.45 in 2002 to 0.38 in 2015, and the World Bank and OECD confirm this improvement. This might be seen as a slight improvement, but one must consider that it happened during the 2008 global financial crisis when most countries were worsening.

They say there are three types of lies – lies, damned lies and statistics. It is true that numbers can be strong tools of persuasion, even against the obvious. Still, the figures I mention here are not just dull statistics. In addition to this reliable and respectable statistical evidence, many in-depth studies show that people think Turkey's social policies are improving their lives. Many studies also show that voters are inclined to equate these policies with the government, the AK Party or especially Erdoğan. This shows that social policies have played a critical role in strongly bounding its base to the AK Party both emotionally and materially.

Of course, not everything was great for all the vulnerable and all the poor in Turkey under AK Party rule. Despite improvements, Turkey still has a lot to do to become a high-spending country in terms of social expenditure as a percentage of GDP among OECD countries. This brings us to the third point of the strategic voting behavior of the median Turkish voter. The Turkish electorate is not fully satisfied with all policies. They compare them to those prior to the AK Party era and strategically act to protect the existing improvements in their daily lives.

This strategic voting behavior analysis is also equally valid to answer the question of why the critiques of democracy and liberal freedoms in recent years are not weakening the electoral support of the AK party. Even if the marginal AK Party voter is concerned about these issues, they continue to vote for the party, thinking it would be much worse than the actual situation of their daily lives if the party were not in power, as the lack of it in power will be much worse. In this sense, the ordinary AK Party voter, even though they do not agree with several government policies, still vote strategically for the party so as not to lose economic and social gains they have achieved during the AK Party's reign and to avoid worse.

As a key aspect of Turkish politics

So far, I have tried to elaborate three key factors explaining the phenomenon of the AK Party's constant election successes by scrutinizing social policies in Turkey in the recent decade: (i) they are working to improve the daily lives of large sections of society, (ii) they instrumentally affect the voting behavior of the biggest chunk of the Turkish electorate and (iii) voters strategically and rationally vote for the sake of them.

Although these points represent only a small aspect of a complex phenomenon in Turkish politics, they are of the utmost importance to understand the Turkish case. Scrutinizing social policy mechanisms in the AK Party's electoral victories presents great opportunities to extend political science discussions on Turkey.