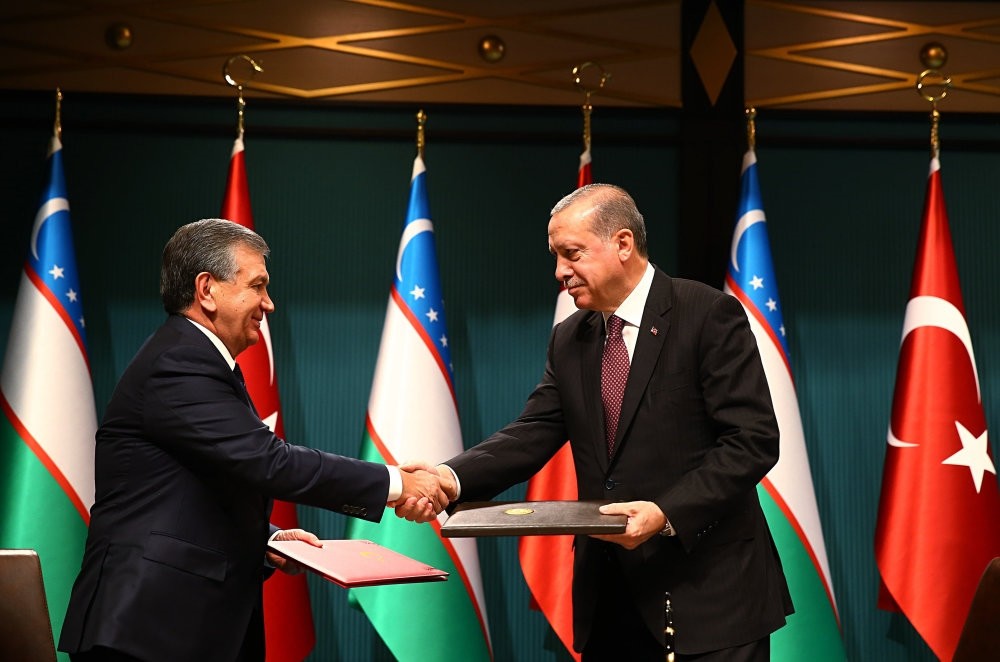 The Uzbek president's official visit to Turkey heralds a new era starting between the two countries in terms of bilateral economic, political and cultural relations, as well as promising a positive development in the Turkic region

Cooperation, not to mention partnership, always bears a personal element. On the state level, it means goodwill, mutual understanding and fiduciary relations that are never immune to a personal touch from countries' leaders. "From the look in our eyes, one can tell how much we missed each other during the past 20 years," Uzbek President Shavkat Mirziyoyev remarked in reference to his Oct. 25-27 talks with President Recep Tayyip Erdoğan. He added: "Not that we got each other from half a word, we understood each other without saying a word, just from a look in the eye."

The leaders' talks took place during Mirziyoyev's state visit to Turkey, the first in 18 years to this country by a leader of Uzbekistan. It was a long-expected and timely event to boost Turkish-Uzbek relations to new levels beneficial for both countries. Erdoğan called the visit historic, adding that Turkey "is interested in a strong Uzbekistan, since its people are our friends and brothers." In turn, Turkish political analysts highly appraised the visit's outcomes and took them as guidelines for the development of Turkish-Uzbek relations for the coming decade. Mirziyoyev's visit to Turkey is evidence of Uzbekistan's new course of rapprochement with its close and distant neighbors. Less than a year in office, Mirziyoyev started Uzbekistan on an ambitious modernization program that the country has not seen in its 25-year history. He also largely moved away from the veil of privacy hanging over Uzbekistan's post-Soviet development to engage in open dialogue, broad interaction and confidence building with other countries.

A partnership to flourish

The two presidents signed a joint declaration and announced the launch of a strategic partnership that lays down a roadmap for expanded cooperation in a variety of sectors, including foreign trade, agriculture, mining, civil aviation and tourism.

Today, Turkish-Uzbek trade hardly reaches $1.3 billion, far below the potential. Still, just during the first nine months of 2017, trade turnover has grown 29 percent from 2016 levels. In line with the newly adopted policy of openness, some 20 enterprises with Turkish investment and representative offices of 53 companies have started working in Uzbekistan since the beginning of the year. As of now, investments by Turkish businesses in Uzbekistan are about $1.2 billion, and 110 construction projects completed by Turkish contractors amount to around $1 billion.

On the eve of his visit to Turkey, Mirziyoyev relaxed the visa regime for Turkish nationals to boost political, trade and economic, science and technology and cultural cooperation between the two countries. One-year, multi-entry visas will be granted to Turkish businessmen, and monthly visas for tourists from Turkey, while overall visa procedures are substantially simplified. "A day will come, I believe, when our friendly and brotherly nations will not require a visa to visit each other. We'll work it out for sure," Mirziyoyev said while in Turkey.

During his visit, Turkey and Uzbekistan signed agreements to boost trade turnover to $5 billion over the next five years and $10 billion during the coming decade. Around 20 agreements covering different sectors of cooperation were signed on the first day in Ankara, while another 35 agreements amounting to $3.5 billion were made in Istanbul at the Turkey-Uzbekistan business forum. Civil aviation will be among the beneficiaries, with direct flights between Istanbul and Samarkand to be launched immediately by Uzbekistan Airlines and from March 2018 by Turkish Airlines. Mirziyoyev's visit to Turkey opens a new chapter in Turkish-Uzbek rapprochement. The anticipated process is well rooted and enjoys a solid foundation. Turkey was the first country to recognize Uzbekistan's independence, and former Uzbek President Islam Karimov was one of the first Central Asian leaders to visit Ankara. The countries officially established diplomatic relations, and a Turkish Embassy was opened in Tashkent and an Uzbek Embassy in Ankara. Uzbekistan, an emerging independent republic, came to consider Turkey a friend and nation close in language and culture. Still, in the following years, Turkish-Uzbek relations never developed in a straightforward and stable way and occasionally suffered from both sides' political ambitions and, as such, experienced ups and downs.

Modern Uzbekistan is very different from the country it was at the start of the 1990s. Under the guidance of its first president, Karimov, it was transformed from a Soviet-era cotton grower into the world's 10th largest gas producer, while retaining from Soviet times its leading position in other sectors. Today, it is the only post-Soviet economy with a national automobile industry built from scratch during the years of independence.

Recently, Uzbekistan embarked on robust modernization of its overall life, which is a timely process meeting internal and regional demands. Maintaining high economic growth and increasing competitiveness in the Uzbek economy are matters of high priority for the current government. With this in mind, in February Uzbekistan adopted the 2017-2021 Action Strategy to become the national program for years to come. Focusing on five development priorities, it generates broad international attention.

According to International Monetary Fund (IMF) Managing Director Christine Lagarde, it is "ambitious reforms … vital to strengthening the economy, creating more jobs, and achieving sustainable and inclusive growth," while presenting "initiatives to improve regional cooperation … much needed to deal with the region's biggest challenges, such as sharing water resources, creating an efficient regional energy grid, and facilitating transportation." Lagarde reiterated the IMF's commitment to "partner with Uzbekistan in its journey" when meeting with Mirziyoyev in New York on the sidelines of the 72nd UN General Assembly session. The promising results of the newly launched reforms are apparent. In September, Uzbekistan's central bank took steps to make the national currency, the som, fully convertible by introducing a market-based exchange mechanism. By 2019, all foreign exchange restrictions are to be removed. In its reforms, Uzbekistan is backed by the results of two decades of gradual modernization steered by its central government. Their accomplishment made Uzbekistan self-sufficient with internal reserves required for broader engagement in the global economy.

Uzbekistan is a key Central Asian country, and it is ready today to strengthen its stand in global and regional affairs to upgrade its historical core position in this part of the world. It is an ambitious goal to pursue and feasible to accomplish. For this, Mirziyoyev has a mighty tool at his disposal in the form of broad international dialogue buttressed by good neighborly relations. In September, Uzbekistan and Kyrgyzstan finally signed a border delimitation treaty that they had consistently failed to do since 1991. "A state border treaty results from political will and compromise," Mirziyoyev said on the matter. "We restore our history."

Peace and stability are the vital topics on the Central Asian agenda. The region at large is prone to sporadic sectarian outbursts and is a hotbed of protracted hostilities in Afghanistan. Uzbekistan has continuously safeguarded regional peace and stability since the early 1990s, while supporting international initiatives on peace and security. It is a full member of the Shanghai Cooperation Organization (SCO), a military alliance that came into being to build stronger mutual trust in the border regions of Central Asia. Never envisaged as a military block, the SCO calls on its members to engage more broadly than their respective military forces due to the growing threat of terrorism, extremism and separatism in the region. In light of current security concerns in Afghanistan, Uzbekistan is ready to be more actively involved in SCO activities. It has rendered support to the Russian initiative voiced last June by President Vladimir Putin to resume the work of the SCO-Afghanistan Contact Group kept on standby since 2009. Turkey is a SCO dialogue partner and plans to become a full member. Besides other benefits, an upgrade of Turkey's status would render its multilateral diplomacy additional leverage to handsomely contribute to its bilateral relations with SCO member countries. As such, Turkish-Uzbek relations have a potential to receive an additional dimension, and this time in a multilateral format.