From Daesh claim to Zarrab case, how US is involved in anti-Turkey campaign 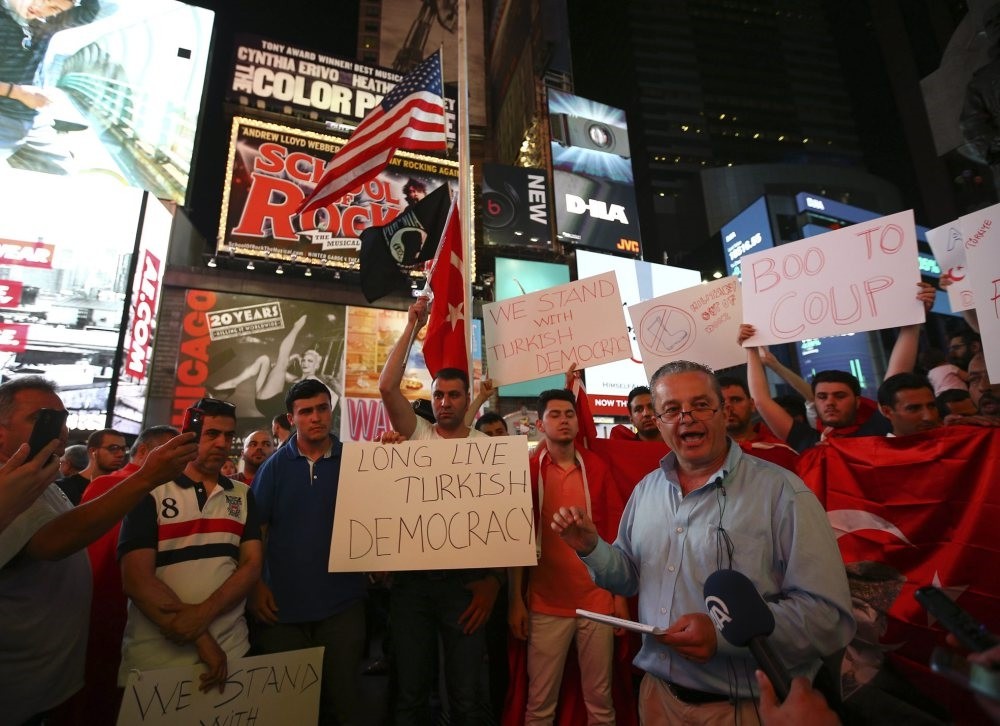 After being fooled by FETÖ, the U.S. participating in the anti-Turkish bloc is about to end its years-long cooperation and alliance with Turkey

Turkey was the first country to conduct an airstrike on Daesh and also include it on its list of terrorist organizations at a very early date, thus becoming a priority target for the group. Again, the most successful military operation against Daesh in Syria was carried out under the name Euphrates Shield by the Turkish military in cooperation with Free Syrian Army (FSA). Lastly, Turkey established control over Idlib's city center as a de-escalation zone in accordance with the Geneva and Astana talks.

Unfortunately, however, while this terrorist group was blatantly seizing control of territory in Syria and Iraq, Turkey's preventive efforts were virtually thwarted and an extensive smear campaign against it was launched with the claim Turkey provides weapons to Daesh. False and misleading reports and interviews by unnamed authors full of groundless allegations were all intended to create the impression that Turkey was assisting Daesh.

The Gülenist Terror Group (FETÖ), which had infiltrated state institutions, colluded with this campaign from inside by fabricating evidence. In January 2014, FETÖ-linked prosecutors, officers and judges unlawfully stopped National Intelligence Organization (MİT) trucks carrying aid to Turkmens in Syria and told the world that the aid was going to Daesh. The same FETÖ would later attempt a coup on July 15, 2016, killing 249 civilians and bombing Parliament and many other strategic locations.

Political backers of the false accusation that Turkey supports Daesh were the main opposition Republican People's Party (CHP) and the pro-PKK Peoples' Democratic Party (HDP). These two parties brought into the political arena all the claims and fabricated documents by FETÖ and the foreign press. Further, when Daesh advanced toward Kobani, the HDP called people, along with the PKK, to take to the streets. Just then, the PKK, with the assistance of militants from the People's Protection Units (YPG), the militia of its Syrian affiliate, dug trenches, created rebel zones and took civilians hostage on the Turkish side of the Syrian border. These trenches were filled with tons of bombs, handmade explosives and heavy weapons. FETÖ-linked police, soldiers, judges, prosecutors, district governors and other civilian authorities helped the PKK to achieve that goal by preventing government agencies from taking measures.

The lie was so blatant, though. When Daesh attacked Kobani, Turkey allowed then Iraqi Kurdistan Regional Government (KRG) President Masoud Barzani's peshmerga forces passage and prevented the fall of the town. The heavily armed peshmerga forces had to cross through Turkey to reach the town. The ruling Justice and Development Party (AK Party) supported the parliamentary motion required for that, but ironically, the HDP, which had accused Turkey of supporting Daesh for the fall of Kobani and called for an uprising, voted against the motion along with the CHP. In other words, help to the town became possible through the votes of the AK Party and the Nationalist Movement Party (MHP). Even this alone reveals the truth about the issue.

These two parties continue the same discourse. But this claim is not maintained abroad now. And beyond that, new and irrefutable evidence has emerged that shows how and who protects and uses Daesh. As is known, Turkey has repeatedly warned that collaborating with a terrorist group to fight another terrorist group in Syria or in any troubled part of the world is wrong. Not only that, for instance, Turkey offered to cooperate with the U.S. and coalition forces during the liberation of Raqqa. Already, Operation Euphrates Shield had been proof of Turkey's success.

However, Turkey was persistently ignored regarding the issue. It had already become clear that the libel about Turkey's support for Daesh was only intended to prevent this.

The U.S. insisted on conducting the Raqqa operation with the Democratic Union Party PYD's YPG, the Syrian offshoot of another terrorist group, the PKK, which is managed directly from the Qandil Mountains. On the very day Raqqa's center was captured, giant posters of PKK leader Abdullah Öcalan were hung in squares.

And it did not stop there. Last week, 250 Daesh militants – 3,500 people in total including their families – left Raqqa in trucks full of weapons. However, the U.S. expressed "respect" for the deal, while explaining that it would guard the PYD if Turkey launches an offensive on Afrin, i.e., it would confront Turkey.

Many questions to be answered

How does one explain this? Who really helped Daesh? Definitely, it was not Turkey. Although Daesh does not fight Bashar Assad's regime or the PYD, Turkey regularly detains Daesh militants set to carry out attacks and is sometimes targeted with civilians losing their lives. But why does the allegedly defeated Daesh, which announced its withdrawal to Anbar, target only Turkey? Daesh virtually serves as a lever, a master key in line with a certain purpose.

And not only that, either. Fetullah Gülen, the ringleader of FETÖ, the perpetrator of the July 15 coup attempt, which cooperates with the PKK in Turkey, still lives in a luxurious mansion in Pennsylvania in the U.S. He continues to manage his illegal activities from there through his henchmen. Prime Minister Binali Yıldırım recently pressed the issue again with U.S. Vice President Mike Pence. Speaking in a televised interview, Yıldırım referred to the argument, "The evidence provided by Turkey is not particularly strong and not conclusive," saying: "Turkey was the first country to offer help and send its military to Afghanistan after 9/11. We didn't ask the U.S. is there any evidence that al-Qaeda was behind the attacks."

On Dec. 17 and Dec. 25, 2013, FETÖ attempted a judicial coup against the government through illegal wiretapping, surveillance, fabricated evidence and doctored tapes. The date was purposefully chosen ahead of three important elections: the March 2014 local, June 2015 general and August 2015 presidential elections. In other words, Turkey's government would be renewed at every level. On Dec. 17 and Dec. 25, FETÖ members who had infiltrated the state with designs on politics acted on the instructions of their so-called imam in Pennsylvania before these elections.

What is the Zarrab case?

Reza Zarrab's trial in the U.S. was built on this fabricated evidence. The bill of indictments written by Gülenist prosecutors and judges during the Dec. 17 and Dec. 25 coup attempts are included verbatim in this trial. Let me point out that the prosecutors and judges of the Dec. 17 and Dec. 25 coup attempts apparently wrote the main trial's bill of indictment long before the investigation and referred to President Recep Tayyip Erdoğan in it as "the prime minister at that time." In short, the so-called legal content of such a blatant coup attempt forms the backbone of the Zarrab trial.

Is it not known that Turkey will not allow the creation of a satellite PKK statelet along its border and that relations with the supporters of this idea will automatically deteriorate? What country would allow such a thing? What would Washington think and do if Turkey hosted Daesh leader Abu Bakr al-Baghdadi in Ankara and supported terrorist groups that attack the U.S.? What consequences will the opening of Zarrab's trial in the U.S. as a continuation of the July 15 coup attempt have?

Are these questions asked in the U.S.? Sure they are. But what are the probable answers?

Assuming that the goal is to tame Turkey and pave the way for political designs at home, do they believe relations will somehow resume and improve rapidly when this goal is not achieved?

Is it not more legitimate, easier and more democratic for the U.S. and Turkey within the framework of the principles of an honest alliance to join forces and goals across the region and in every area, than to help terrorist groups create a state? Can there be a reason for getting annoyed over Ankara moving closer to Moscow while hurting Turkey so much?

I suppose such wisdom is lacking in the U.S., or there are multiple Americas at war with each other. This kind of adventurous approach also suggests political weakness. Let's hope that this weakness, whatever its cause, is immediately removed.

The world needs strong Turkish-U.S. cooperation now more than ever.