What does Atatürk mean for Turkish conservatives? 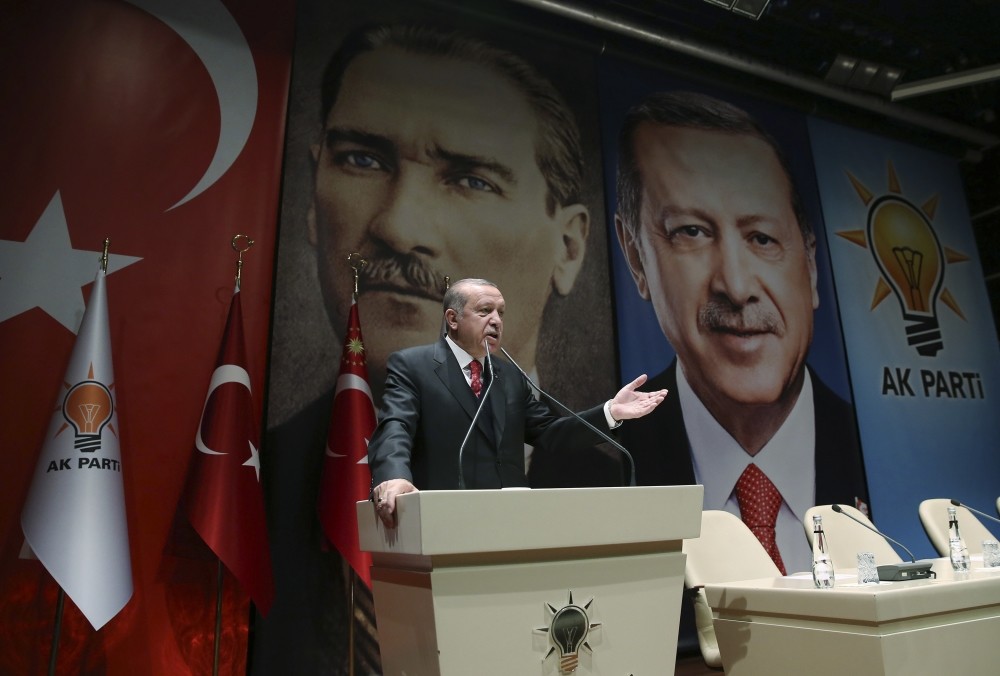 In front of posters of Turkey's founding leader, Mustafa Kemal Atatu00fcrk, and himself, President Erdou011fan addresses provincial leaders of his party, Ankara, Nov. 17.
by Oğuzhan Bilgin
Nov 29, 2017 12:00 am

Only a few political figures have been able to leave a memorable mark on history while at the same time continuing to be perceived as a national symbol and discursive source of political and social legitimization. It is unprecedented in world history that a leader, 79 years after his death, still constitutes a tool for political and social justification in debates. That leader's name is Mustafa Kemal Atatürk.

The founder of the modern Republic of Turkey, Atatürk was commemorated on the 79th anniversary of his passing with official and unofficial ceremonies and events. Thousands attended the ceremonies at his mausoleum in Ankara together with other ceremonies in various cities.

There are national heroes and historic leaders that are perceived as national symbols in almost every nation. However, there is something unusual about Atatürk. He is not remembered only in history books or in peoples' memories. Anyone visiting Turkey could feel the presence of Atatürk as if he were still alive because millions of people constantly mention him in political debates. Others, meanwhile, change their profile pictures to Atatürk and often quote him on social media.

The commemorations this year caused additional debate and drew attention since many government officials participated in the ceremonies and President Recep Tayyip Erdoğan and ruling Justice and Development Party (AK Party) officials praised Atatürk – which was remarkable.

"We naturally respect Atatürk, who was the leader of such struggle, hence, he has a valuable place in the heart of the nation," President Erdoğan said. "Our War of Independence is a period when our nation all rose together with its soldiers, administrators and religious officials. Thus, he is an esteemed natural leader who fought for independence and he has a special place in the heart of the nation."

"The honored veteran Mustafa Kemal is one of the shared values of this country and our nation," he added.

Both in the national and international media, it is being argued whether this is a new strategy for the AK Party in an attempt to gain the votes of secularists in the 2019 presidential elections or whether it should be perceived as a delayed appreciation of Atatürk's value.

However, the debates did not include any analysis of the history of the ideological and cultural character of the AK Party and Turkish conservatism. Hence, an in-depth analysis is needed.

Misperception on the AK PartyFirstly, the assumption that Erdoğan and AK Party officials or the Turkish conservatives were against Atatürk is simply misleading. There is no solid base or evidence for this proposition. Neither a statement nor policy of the AK Party against Atatürk can be found in the past.

On the contrary, President Erdoğan and the AK Party representatives attended the commemorations every year and mentioned Atatürk's name together with his quotes in most of his speeches. For instance, in the commemoration last year, Erdoğan stated, "We consider it a duty to give Atatürk due credit in front of our nation since he was the commander of our War of Independence and the founder of our Republic. Our nation's respect for Atatürk is eternal."

Secondly, not only for the AK Party as an institution, but there is also no evidence that mainstream conservative nongovernmental organizations, newspapers, journals or politicians were against Atatürk. Thirdly, building a new discourse for an election campaign that will take place in two years could be utopic. No campaign can be prepared for two years in advance since it is too hard to make predictions in politics.

The major reason for this kind of misinterpretation arises from the opposed ideology of Kemalism, which opposes Kemal Atatürk himself. In most of the international media, contemporary Kemalists, who advocate strict-authoritarian secularism as well as self-colonialist cultural Westernism, are confused about the historical character of Kemal Atatürk because of the common word "Kemal."

Kemalism, as an ideology, was not written or created by Atatürk himself as if he was an ideologue. Instead, Kemalism was theorized by some intellectuals, politicians, starting from the late 1930s, largely after the death of Atatürk. They attempted to form a doctrine embracing the Westernist, authoritarian and secularist principles stated above and used the doctrine as a legitimizing tool for the coup d'états in 1960, 1971, 1980, 1997 and even on July 15, 2016.

Mostly, the conservative part of Turkish society and politics has opposed this anti-democratic, Westernist and authoritarian secularist group of intellectuals and politicians, who define themselves as Kemalists that benefit from the name of Kemal Atatürk by attributing his name to their ideology. Except for few extremist Islamist groups or scholars, Atatürk has been perceived as a national hero among conservatives that saved the homeland and Muslim Turks against the colonist powers of the Western world, after the collapse of Ottoman Empire.

This does not necessarily mean that any policies or ideas of Atatürk could not be criticized. Conservative scholars and authors, as well as some other politicians, criticized the cultural reforms i.e. the hat act, the introduction of a new Turkish alphabet, prohibition of Turkish music and the construction of a single-party regime during Atatürk's time. However, these criticisms do not stop them from having sympathy, admiration and respect for him.

As a person, who fought against the Western invasion and inspired not only Turks but also other oppressed, colonialized nations, Atatürk is a symbol for all national liberation movements as Mahatma Gandhi declared during the process of the Indian independence struggle against the British imperial rule.

Today, Turkey is fighting against the PKK separationist terrorist organization, the Gülenist Terror Group (FETÖ) and Daesh. The Turkish people and government believe these terrorist groups are financially and politically supported by some foreign powers. President Erdoğan frequently mentions this struggle as the struggle of independence referring to the War of Independence after World War I. He also challenges the hegemony of world powers in the United Nations by repeatedly saying that, "The world is bigger than five." Hence, it is expected and understandable that he and his government emphasize the role and value of Atatürk. Ultimately, Atatürk is the national symbol of independence and anti-imperialism for Turks.

* Ph.D. at the University of York