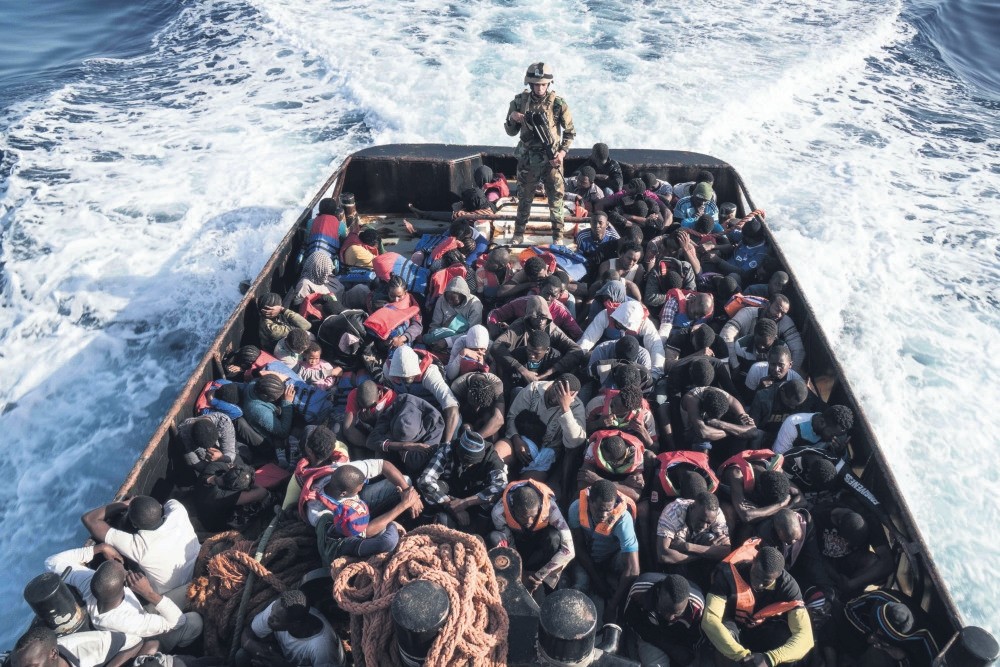 A Libyan coast guardsman stands on a boat during the rescue of 147 illegal immigrants attempting to reach Europe off the coastal town of Zawiyah, 45 kilometres west of the capital Tripoli, Libya, June 27.
by Yusuf Erim Dec 09, 2017 12:00 am

The EU, by curbing migration and tightening its borders, is choosing to treat the symptoms rather than cure the problem of global migrant crisis

The long-awaited African Union-European Union (AU-EU) summit in Abidjan, Ivory Coast, has concluded, and the results of bilateral talks between members of both continental blocs seem to have ended in complete failure. The summit, which marked the first meeting between both unions since the 2015 Valletta Conference, was expected to address and provide a platform to create a framework for future migration strategies. However, the event, which was attended by 55 African and 28 European leaders, did not yield any results and showed how far apart both are in formulating a solution. European and African leaders could not even reach an agreement on the basic terms for measures to help stop what in the coming decade could turn into one of the largest migration movements in human history. There were many high expectations before the summit, but unfortunately, the only decision on migration reached at the meetings were the evacuation of 3,800 migrants who have been stranded in Libya. While migration continues to be the biggest crisis between the AU and EU, population and migratory trends as well as political destabilization in the region and climate change signal that the problem has the potential to get exponentially worse.

Africa's population expected to double by 2050

The United Nations recently revised their "World Population Prospects" report, now estimating that almost 55 percent of the world's population growth by 2050 will take place in Africa, and the continent's population will balloon from 1.2 billion in 2017 to 2.5 billion by 2050. As Africa's already young population continues to grow in the coming decades, the unemployment and education problems facing the continent will deteriorate even further.

I was in Abidjan during the summit week as part of Turkish broadcaster TRT World's Ivory Coast special coverage team, and for me, the sheer number of unemployed young adults roaming the streets clearly signified that the migration issue is only going to get worse. While chatting with many of these young adults, I could see the mere mention of Paris, London or Rome was enough to spark a glimmer of hope in their eyes. I traveled to Yamoussoukro, the capital of Ivory Coast, and had a chance to talk with Father Franck Allatin, who is the rector at Our Lady of Peace Basilica. His Sunday sermon concerned the migration problem. He said that with the spread of technology and communication, all Africans can easily see the lifestyles and prosperity of Europe and that this is very appealing to them. Allatin also criticized local governments for not providing enough opportunities for young people to stay and gave a different perspective to the migration issue, asking: "If all these young people leave, who is going to develop our country for us?"

Money alone is not the answer

So far, the EU has been very unsuccessful in its migration policies, which is evident from the record number of detentions the French, Italian and Spanish coastguards have recorded this summer. The EU, by curbing migration and tightening its borders, is choosing to treat the symptoms rather than cure the problem. Europe has also given and pledged hundreds of millions of euros to African countries to aid them in migration management, but this is basically outsourcing responsibility. The African countries closest to Europe have neither the infrastructure nor the training to deal with such an influx of refugees, and the disastrous results range from overwhelmed coastguards to inhumane treatment of migrants and even slave trading, as was recently reported in Libya. European leaders need to start recognizing the magnitude of this crisis and developing long-term solutions before the problem mutates into an unsolvable dilemma. Instead of shutting its doors and throwing money at the problem, EU lawmakers need to establish legitimate pathways for African migration to Europe, create employment opportunities and share technology with African countries. This is not a problem to be solved at Europe's doorstep, the solutions need to be discovered in cities and villages across Africa.

Champion of migrants missing at the summit

Despite many EU countries having pledged to accept a certain quota of migrants, we can see that these promises have not been kept. Just a couple thousand migrants in countries such as Austria, Hungry, Poland and Slovakia have sparked domestic outrage and increased support for far-right groups. As bickering among European countries continues, Turkey has been a migrant success story, housing an estimated 3.5 million refugees. Since the 2016 Turkey-EU migrant deal, Turkey has been able to develop a strong infrastructure to house these newcomers, while the government and local nongovernmental organizations have worked tirelessly to feed, educate and provide security for them. Despite the EU's many unfulfilled promises, President Recep Tayyip Erdoğan has continued to be a champion for migrants and kept Turkey's end of the deal. It is estimated that the cost of Turkey's hospitality is upwards of $25 billion, dwarfing the EU's 6 billion euro pledge. While EU leaders continue to pat themselves on the back for a job well done containing the migrant crisis in the Eastern Mediterranean, it is President Erdoğan and the Turkish government that should be receiving the praise for single-handedly solving the problem. It is disappointing that a government and a president who have been so successful in dealing with the migrant crisis were not invited to or represented at the AU-EU Summit. Both European and African leaders could have greatly benefitted from Erdoğan's experience and strategies in providing solutions on migration. Turkey has always had a strong relationship with Africa, and as a member of the international community, it has one of the highest numbers of diplomatic missions on the continent. Ankara also has a strong Africa policy and chooses to actively invest in the infrastructure of African countries rather than just throw money at them. From a political, historic and socioeconomic aspect, Turkey could have been a great mediator at this summit.