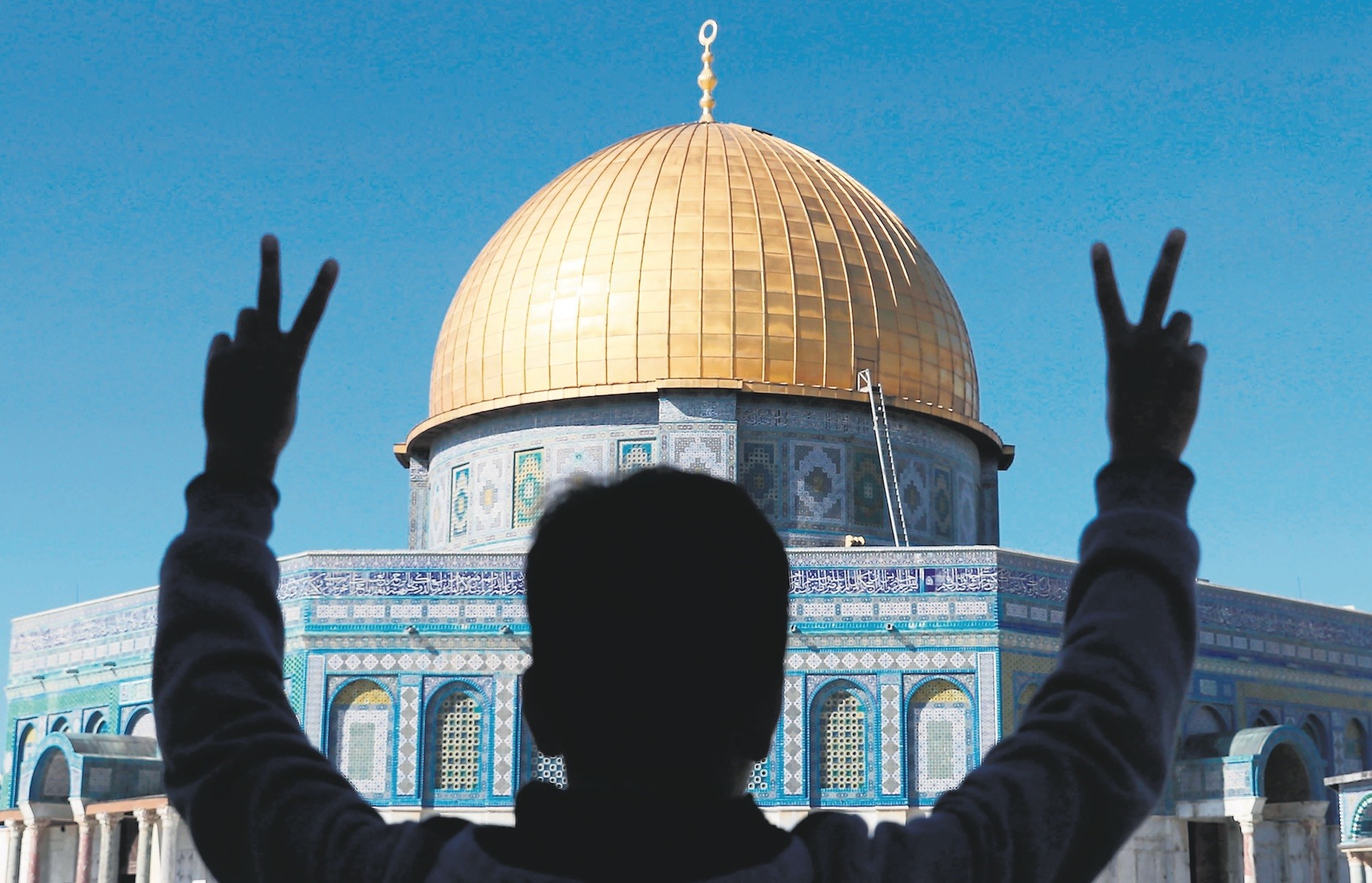 A Palestinian youth flashes the u201cvictoryu201d sign after during prayers in front of the Dome of the Rock at the Al-Aqsa Mosque compound, Jerusalemu2019s Old City, Dec. 8.
by Mustafa Fatih Yavuz Dec 11, 2017 12:00 am

Trump recognizing Jerusalem as the Israeli capital has no doubt escalated the tensions in the occupied territories, leading to a number of clashes in the following days

The long rumored U.S. Embassy move in Israel has come to an end. The 45th president of the U.S., Donald Trump, signed the Jerusalem Embassy Act of 1995, which had been enacted by the then Senate and House of Representatives of the U.S., providing for the relocation of the U.S. Embassy from Tel Aviv to occupied Jerusalem and accepting Israeli occupation of the city in 1967. That document had had a long history of delays by Trump's predecessors due to national security reasons and regional realities that prevented a move to declare occupied Jerusalem as the capital of Israel since 1995.

Since the signing, regional and global actors, such as Turkey, Jordan, Iran, France, Egypt, Qatar and the Vatican, have stood against that unilateral act of the U.S., which violates international law that forbids the acquisition of land by force. Palestinians also declared a general strike and called for protests in occupied Palestinian territories, while Hamas called for a new intifada. Though Trump labels his move as an acknowledgment of fact, a number of Palestinian thinkers said the move changes nothing as Jerusalem is already under occupation; the declaration of Jerusalem as Israel's capital merely states the obvious.

Trump has personal ambitions, wishing to be accepted as a real president with his go-getter skills as presented during his election campaign. He also wants to put his stamp on history by reaching the ultimate deal between two sides as his predecessors' wished for their political careers. But for Trump, it does not matter whether the deal is just, long-standing or satisfactory for both sides. Hours before his speech declaring occupied Jerusalem as Israel's capital, Trump said: "Many presidents have said they want to do something and they didn't do it, whether it's courage or they changed their mind, I can't tell you. I think it's long overdue." To reach his so-called ultimate deal, Trump wanted to eliminate the final status of Jerusalem discussion in peace negotiations that until now was always the last matter to be discussed by the sides. In this way, Trump and his team have shown that Israel has always been the party to knock the negotiation table down due to their unending ambition toward occupied Jerusalem. That is why to reach a deal between the two sides, it is not Palestinians but Israelis that should be satisfied. The main indicator of this is the position paper published by Trump's advisor Jason Greenblatt and current U.S. Ambassador to Israel David Friedman.

The paper indicates, "Even before negotiations take place between the two sides, the U.S. will recognize Jerusalem as the eternal and indivisible capital of the Jewish state and move the U.S. embassy to Jerusalem." However, Trump is mistaken. Abbas or any other Palestinian leader cannot sell this deal to Palestinians. That mistake derives from historic Palestinian concessions since the Oslo Accords and the idea that Palestinians are the party that can be forced to make concessions.

This will further isolate Palestinians. But Trump and his team should have known that Palestinians are more integrated and powerful when they get more isolated. The latest Aqsa incident shows that divided Palestinian society get together during times of crisis and strive to take what they want through the streets. Even though the Israeli side knows very well that Trump's move won't lead to a comprehensive deal between the sides, it does not bother the Israelis at all. Their main focus has always been to change the realities on the ground for their sake.

When the Madrid Peace conference was finalized with nothing, it was Netanyahu's old boss Yitzhak Shamir who confessed he would maintain the talks for years and during this time Israel would reach demographic superiority in the West Bank. It should be noted that there is no status quo in occupied Jerusalem as in the other occupied Palestinian lands. Israel, since its creation in 1948, has never planned or wished for peace or real concession with Palestinians. The role of Israel in the Palestine-Israel conflict has always been provocation. For Israelis the main aim in Jerusalem as in the other occupied lands is to Judaize the city, damaging both its Muslim and Christian character. With recognition of occupied Jerusalem as the capital of Israel, the U.S. supports that Judaization project affecting both Muslims and Christians.

The other thing that paved the way for the embassy move is the regional environment and new partners in crime. The Middle East is deeply divided with national agendas of the countries, even though Jerusalem is the third holiest site for Muslims and has been under constant occupation by a colonial project. In the past, the situation of Jerusalem used to have a unifying affect, at least on discourses for those who are in rivalry with each other. But this time, even though Saudi Arabia seems to be on the same page with other Muslim countries, recent rumors that popped up after the meeting with Abbas and Mohammed bin Salman, the crown prince and the kingdom's de facto ruler, indicates the contrary.

According to the New York Times, the series of phone calls Abbas had with several regional leaders after his meeting in Riyadh shook up one Lebanese government official with the proposal that Abu Dis, a suburb of occupied Jerusalem, be the capital of a future Palestinian state. Abbas was also told that he had two months to accept the deal or somebody else accepting the deal would be imposed. Also several officials said that Abbas was offered money to convince him, but that he refused. In addition to the rumors, the intention to establish diplomatic ties between Saudi Arabia and Israel started following Trump's visit to the Middle East and decreased the tone of Israel as the delegitimizing factor and the importance of the Palestinian cause in the Arab world. No doubt Trump's decision will inflame violence in the region and cause deaths. That decision will also give a chance and courage to extreme Jewish religious groups in occupied Jerusalem trying to take over Al-Aqsa mosque, and any violation of the status of Aqsa could even increase the violence and deepen the crisis in the whole region.

* Researcher at TRT World Research Centre, B.A. from the Department of International Relations at Beykent University. He is currently doing a master's degree in conflict resolution and mediation at Tel Aviv University