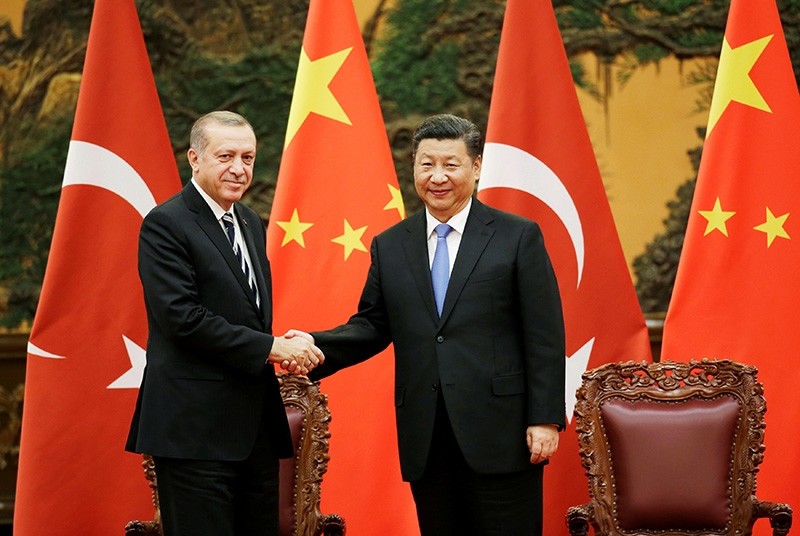 President Erdou011fan and Chinese President Xi Jinping attend a ceremony ahead of the One Belt One Road project, Beijing, China, May. 13. (REUTERS Photo)
by Mehmet Çelik Dec 13, 2017 12:00 am

In the past few decades, Turkey and China have followed strategies that have made one a regional power while making the other a global player in the new multipolar world order.

For Turkey, the end of the bipolar world system, which came about after the end of the Cold War, opened new political opportunities for leadership in its region, while for China, its opening policies in the late 1970s, coupled with the end of Cold War, made it a strong political and economic power in the world.

While the two countries had no significant relations until very recently, steps taken by the governments of the two geographically distant but culturally close countries have brought Sino-Turkish relations to a new level of economic cooperation and trade partnership. In fact, China is Turkey's second-largest trade partner globally and top trade partner in East Asia. China is also at the top of the list when it comes to Turkey's import partners. Strong trade relations have also been supported by the leaderships of the two countries, as President Recep Tayyip Erdoğan and Chinese President Xi Jinping have met four times in the past three years. In May, Erdoğan attended the signing ceremony of the One Belt One Road Project in Beijing, an initiative that will act as a modern-day Silk Road, which will decrease the travel time between China and Turkey for trade transport from 30 days to 10 days through newly established and modernized routes, and it is expected to create a $21 trillion trade cycle.

The strong partnership in trade was also mentioned by Cui Wei, the undersecretary of Western Asia and Africa at China's Foreign Ministry, during my recent visit to China with a group of journalist from Turkey. Cui had said that Turkey and China were "in cooperation of mutual gain," and that China "wants the cooperation to bring gains to both sides."

The strong partnership in trade and economic activity, however, cannot be said to have transferred into diplomatic ties between Ankara and Beijing.

Cui also spoke of China's approach to international relations, which was also discussed during the 19th National Congress of the Communist Party of China held in October. "We have embraced a new type of international relations based on mutual respect. It is a policy that aims for peace and development and to increase human consciousness of common fatefulness, that one single country cannot flourish alone and that the world cannot be ruled by one country, an equitable world must be established. We need to establish a world oriented toward common gains," Cui said.

The idea of a multipolar world system, establishing mutually beneficial relationships, peace and increasing consciousness about development, have also been top priorities for Turkey for the past decade or so. Unfortunately, however, Turkey has also been simultaneously fighting several terrorist groups, such as the PKK, Deash, the Revolutionary People's Liberation Party-Front (DHKP-C) and the Gülenist Terror Group (FETÖ), in addition to the social and economic burden of more than three million refugees from two failed states along its southern borders, Syria and Iraq. Erdoğan frequently says that the world is bigger than five, referring to the five permanent members of the United Nations Security Council, implying that it brings global injustice, inequality and also does not help solve the problems oppressed people face today, among many other reasons.

While it is understandable that there may be some obstacles in establishing closer political ties, particularly when it comes to the defense industry, as Turkey is a NATO country, the two countries can still further develop diplomatic ties when it comes to regional matters and the fight against terrorism.

During the week-long visit, I also had the opportunity to meet with the director of the China Institute of International Studies, professor Dong Manyuan, and discussed Chinese-Turkish relations in the contexts of the Syrian civil war and the Middle East. Manyuan, who was the first secretary and director of the Political Affairs Office of the Chinese Embassy in Turkey, from 1999 to 2002, listed several issues about which he said Turkey and China are closely aligned; namely that China supports Turkey's fight against terrorism, particularly the PKK, its stance against the recent Kurdish independence referendum in northern Iraq, as well as Turkey's efforts for a political transition in Syria. He said China also understands and supports Turkey's fight against terrorism because China has also suffered from terrorist groups. Manyuan also said China has no hidden agenda in the Middle East and that there is much respect in China for Turkey's humanitarian efforts for Syrian and Iraqi refugees.

Moreover, he added that China also supports Turkey against FETÖ and backs Ankara's extradition demands for the FETÖ leader, who has been living in the U.S. since 1999. The academic, who is an expert in Middle East affairs, also said that the U.S. has been twofaced on several issues concerning Turkey and the Middle East, namely the stance on the People's Protection Units (YPG) and FETÖ, despite Ankara's position, and also the double standard on the Palestinian-Israeli conflict.

These are perhaps several issues that must go beyond mere support narratives to further action and measures between the two strong trade partners in order to achieve what Cui mentioned about China's approach to international relations.

China's support to Turkey, and Turkey's support to China in fight against terrorism should turn into establishing a trust-based diplomatic relationship, rather than hypocrisy Turkey has been facing from some of its NATO allies, who say they are on Turkey's side in fighting against terror, yet they supply weapons to groups that attack Turkish citizens, or have been safe havens for members of a cult that attempted the bloody July 15 coup attempt. For example, PKK terrorist group, which has been in an armed conflict with Turkey for nearly four decades, and its Syria affiliate YPG, the group which has been supported by the U.S. in Syria, is not yet listed as a terror group by Beijing. The improving trade relationship can only be further developed and sustained in the long term by further securing political stability in Turkey and its region. China, as an influential power in the region, has a crucial role against such terror groups and proxies in the region, which bring instability as a method that serves those who have imperial interests in the region, and aim to maintain the old world order of bipolar or sole-polar of hegemony over the people in the region and globally.

In general terms, the mutually beneficial gain can only happen when exploitation is not part of the equation. As such, what the super powers with imperial aims has done in the region – destruction – terror – instability - should become 'what-not-to-do' in the Sino-Turkish strategic political partnership. Security, stability and political transparency must accompany what Turkey and China are strongly building in trade and economic relationship.