What came from Erdoğan's visit to Athens? 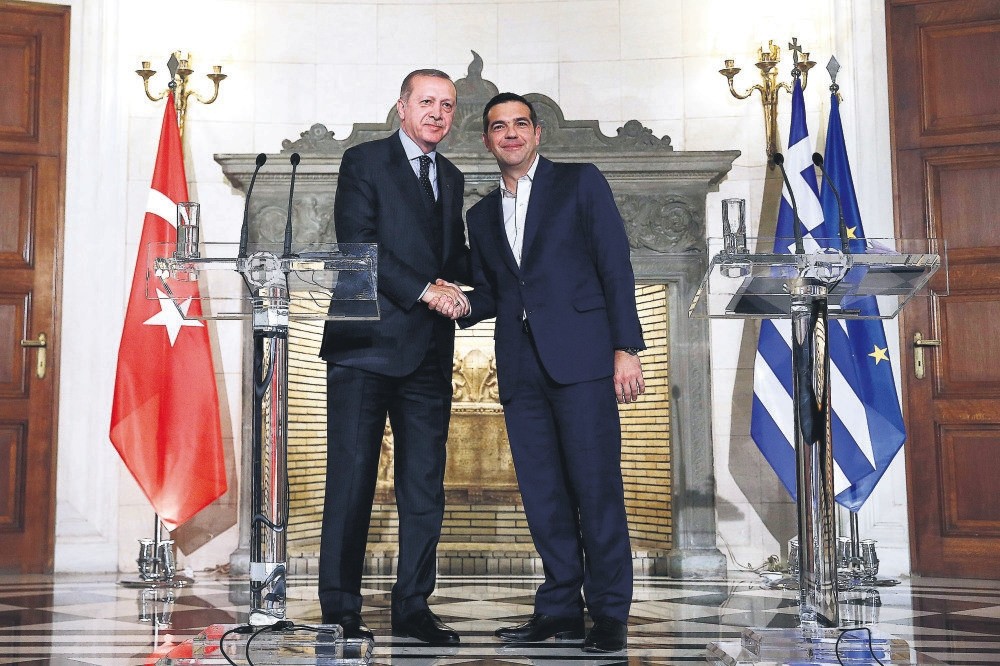 Constantinos Karamanlis, a former Greek political leader, said: "In politics there are some things that are announced but not done, and things that are done but not announced." Moreover, in diplomacy, there are things that are done but not announced, especially sensitive foreign policy issues that should not be known in public and dealt with privately. During an official, important meeting between country leaders, according to protocol in the welcome ceremony, in the first few minutes, they shake hands and welcome each other, they get photographed and then withdraw for discussions behind closed doors, without journalists or a public audience. When discussions end, they join a press conference, having agreed beforehand what should be announced and what should be avoided.

President Recep Tayyip Erdoğan made an important visit to Greece last week in a crucial period for developments in the Middle East. He said: "We don't covet any territorial integrity of another country." In communication studies, language shapes reality in public appearances as well as in interpersonal ones, declares ones state of mind and personality. Despite having been criticized several times, Erdoğan is Erdoğan. He is proud, has strategy, beliefs, principles, a vision for his country, takes risks and seeks results. Moreover, he has turned Turkey from a destabilized and bankrupt country to a considerable global power. He knows very well the international balances and threats. Accompanied by a delegation from Ankara, he arrived in Athens well prepared with an agenda of items that he announced and broadcasted one day before his visit in an interview on a Greek TV channel. "We can discuss everything from alpha to omega," he said, that is, from A to Z.

A top-level meeting must not be limited to discussions that do not end up anywhere or to general statements, but they must at least make progress on high-level issues, which should be based on agreement between the two sides. If this cannot be achieved, then it makes no sense to hold a summit, but rather a lower-level meeting.

Since the ruling Justice and Development Party (AK Party) came to power in 2002, a stronger relationship started to build between Turkey and Greece. Communication channels improved with high-level political meetings, bilateral relations gradually strengthened over the years and now both countries collaborate closely in many fields. Erdoğan himself visited Greece twice before as prime minister in 2004 and 2010.

In May 2010, Turkey and Greece signed agreements and memorandums and a declaration of bilateral cooperation in Athens, sealing the inaugural meeting of the Turkey-Greece High-Level Strategic Cooperation Council. Among those, was the founding declaration for the council itself, which Erdoğan and then Greek Prime Minister Giorgos Papandreou signed. In addition to the agreements signed by ministers, Turkish and Greek organizations and agencies signed a number of agreements.

He provided accurate data that "800,000 Turks visited Greece and 600,000 Greeks visited Turkey," meaning that investments and tourism are a source of income and development for both countries.

In the present day, in the Greek real estate market as well as in other business practices, Turkish investors buy luxury properties, resorts, shops, factories, hotels, yachts, land, even permanent parking spaces for their boats or cars or anything available for sale – Greeks cannot afford the high-taxes – while ensuring a residence.Turkish flags are already fluttering from yachts in the southern suburbs of Athens marinas. These Turkish investors, however, are not interested in rock islets in the Aegean Sea or in real estate in Thrace, but assets in Kolonaki, Psychiko, Glyfada, Panorama of Voula and Vouliagmeni. Tax offices remarked on the "dynamic presence" of financial healthy middle and upper class Turks, who pay millions of dollars. Data from the Greek Interior Ministry's General Secretariat for Migration Policy shows an increasing percentage of Turkish investors, having been favored by law, being providing a residence permit for buying property worth more than 250,000 euros in Greece.

On the other hand, many multinational companies are transferring from Greece to Turkey, playing a significant role in the economy they are operating in. Individual investors and professionals also manage their own investments.

Let's be clear – both countries achieved what in the beginning seemed impossible.

They passed over many difficulties in the past, learning from their mistakes. Erdoğan said he sees the glass half full and Greek Prime Minister Alexis Tsipras said to build bridges, not walls.

In today's fast moving and rapidly changing world, it's a must to go forward, focusing on outcome and rewards.

Leadership success is coming to agreement on long-standing issues and achieving results.