It is time for the UN to change its U.S.-centered mechanism 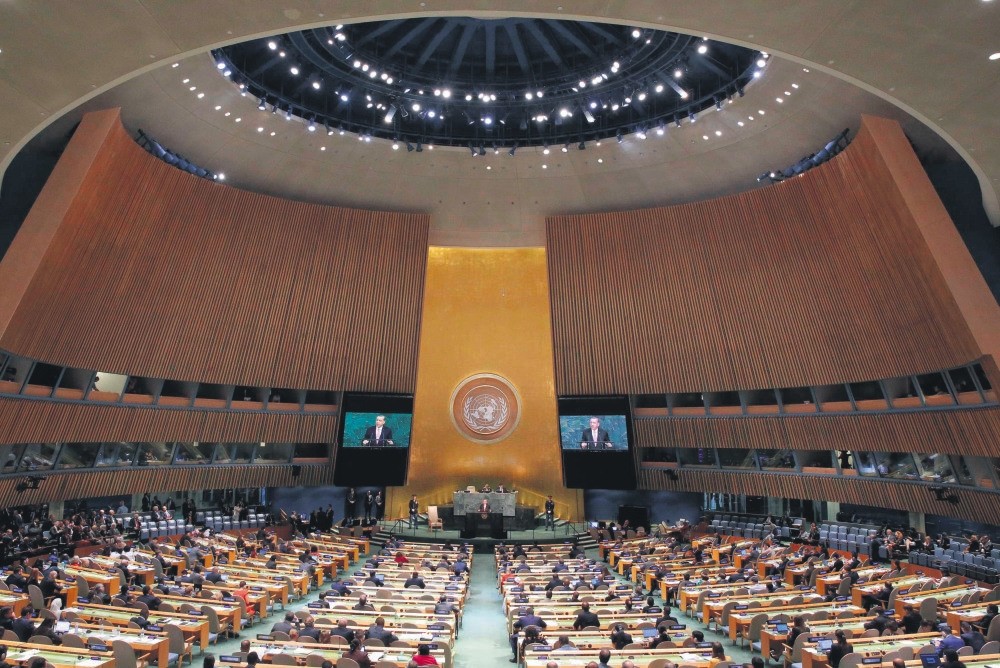 Following the decision of the United States to recognize Jerusalem as the capital of Israel, the United Nations General Assembly made a significant move to protect the city's political, religious and cultural character and rejected the U.S. president's controversial decree. Last month, the United Nations expressed its opinion that decisions against U.N. Resolution 478 should be canceled. Despite the threats of the United States, the result of the General Assembly vote was 9-128, showing the decision proposed by Turkey and Yemen was quite contrary to U.S. President Donald Trump's will.

In addition, the Organisation of Islamic Cooperation (OIC) also declared East Jerusalem the capital of the Palestinian state at its extraordinary summit in Istanbul. At the summit, which President Recep Tayyip Erdoğan called, all states were urged to do the same and recognize the Palestinian state.

It is safe to say that the U.N.'s decision proved how Israel and the U.S. are isolated in the international community. By the way, it should not be missed that the two-state structure was driven by America's support, and the U.S. being left alone in the U.N. is a shocking situation. Therefore, all experts have currently started debating what the U.N. really is and how it enforce sanctions.

The establishment of the organization

The appearance of an intergovernmental organization started with the establishment of the League of Nations in January 1920. It was founded in the wake of World War I to avoid a similar catastrophe. We can call this experience the first centralization effort at a global level. This effort refers to open diplomacy, international law and common security mechanisms. The League of Nations was named by then U.S. President Woodrow Wilson, and the idea that dominated the organization was the 19th century's famous ideology, liberalism. The League of Nations would recognize nation-states established in place of the empires that collapsed after the war. The second perspective that the organization took was to bring peaceful solutions to possible problems around the world. However, instability in a number of member states and its dysfunction concerning rising fascism were only enough to prevent minor conflicts, and the inability to prevent World War II put an end to the League of Nations and made it transform into the current United Nations.

Despite criticism, the U.N. is still the ultimate destination of international organizations and still active in the world. The basis of this biggest intergovernmental organization was laid in 1944 at the Dumbarton Oaks Conference, but it was officially established in 1945 at a conference in San Francisco. The most important development in its establishment process was the formation of the U.N. Security Council (UNSC) with five permanent members. The aftermath of World Word II, which was behind the idea of this five-member council, gave five states veto powers on the UNSC.

When the League of Nations and the United Nations are compared, we can say both organizations were established after major wars. American presidents led the formation of both, and the Western worldview dominated their philosophy. For their differences, it can be said that the organizations of the U.N., their roles and their relations with each other are more prominent, and the U.N. is more decentralized and more space is available for small states.

The second most important body is the UNSC. It consists of 15 members; five are permanent, and the rest are temporary members. Provisional members are elected by the General Assembly for two-year terms. The primary responsibility for maintaining international peace and security belongs to the UNSC. It is empowered both to identify the attacker and to use force against the attack. Permanent members have the right to veto when the UNSC decides with a positive vote of nine members. It is the most controversial and much-debated characteristic in the U.N. The top executive of the U.N. is the secretary-general, who ensures the General Assembly and UNSC work efficiently.

Another important body for the U.N. is the International Court of Justice. It is the principal judicial body of the U.N. and consists of 15 judges elected by the U.N. General Assembly for nine-year terms. Other U.N. organizations are the Council of Trustees and the Economic and Social Council.

The most important criticism of the U.N. is the central position that the United States has in it. Since the U.S. plays an active role in institutions such as the International Monetary Fund (IMF) and World Bank, as well as in the foundation of the U.N., the system can lead the world and organizational politics in the direction of its own national interests. During the Cold War, the organization, trapped between the United States and the Soviet Union, was under U.S. hegemony, and some demands for reforms by member states, including Turkey, to better the functioning of the organization, were ignored. On the other side, the limitation of the permanent membership system to a small number of countries and the granting of veto powers to these countries led to serious criticism. Especially after World War II, despite the development of many powerful nations, East-West and North-South lines maintaining power in certain centers has created internal discomfort. Despite all this, the U.N.'s legitimacy in operation in the name of the international community as the single-highest global power and its acceptance by all states around the world is important for world peace.

Turkey's experience in the United Nations

Turkey became a member of the U.N. in 1945 and performed an important role throughout the Cold War. After the collapse of the Soviet Union, Turkey becoming a member state helped it strengthen its position in the international community. By sending its military forces to ensure peace in some conflict zones, such as Somalia, Bosnia-Herzegovina, Iraq, North Korea, Afghanistan and Albania, Turkey contributed significantly to international peace. As a temporary member, Turkey also contributed to the UNSC in 1951-52, 1954-1955, 1961 and again in 2008. In the context of the Jerusalem conflict, the world once again saw how problematic the U.S.-centered organization is in terms of the functioning of international peace. To find solutions to end this dysfunction and stop it from being a U.S.-centered organization, the U.N. must convene and try to do its best to reform its organizations to truly bring lasting peace to the world.