How to deal with climate change in the Black Sea 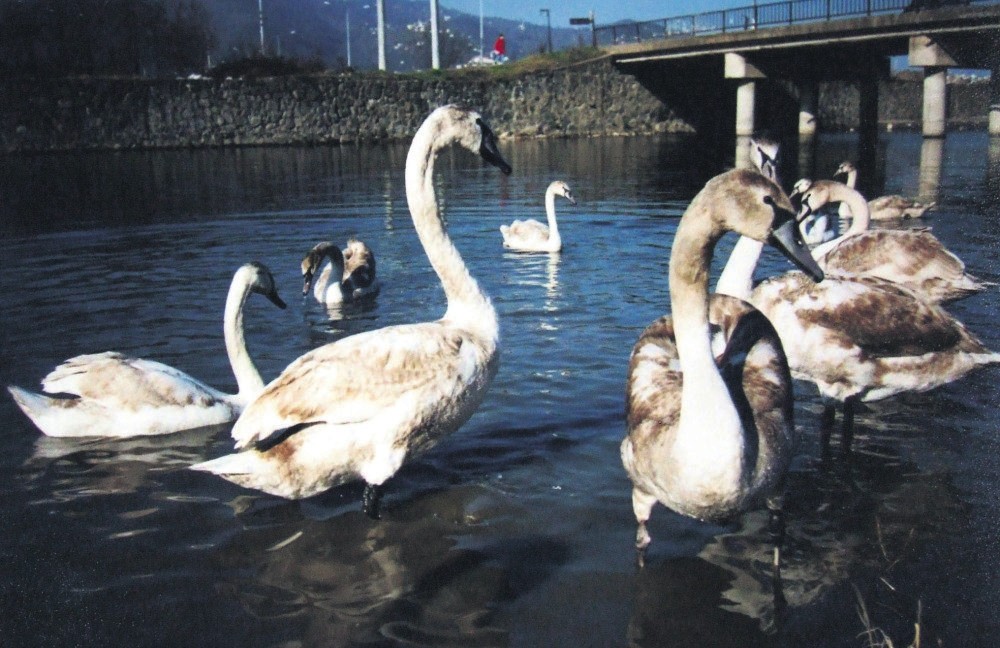 Swans, affected badly due to climate change and pollution in the Black Sea region, in Ordu province at the Black Sea coast. In the past year, swans migrating to many Black Sea cities, including Ordu, was very low.
by Maria Beat Jan 10, 2018 12:00 am

Climate change is a burning issue in the international agenda, and with global warming increasing, it adds a sense of immediate urgency. The year 2017 was the third-warmest year on record, the U.N. Climate Change Conference in Bonn, from Nov. 7 to Nov. 17, 2017, revealed. The conference confirmed as well that the ongoing warming trend shows a strong impact from human activity globally affecting the climate.

The ongoing changes do not recognize national borders, legal barriers or other human-made boundaries that the brightest of minds are trying to erect. Opinions may differ on climate change adaption measures. Still, in one, politicians, scientists, bureaucrats and businesses are unanimous: We urgently need to do something jointly, since climate change is a product of our everyday activity. The change is global by nature and is felt all over the world to varying degrees. Its effects are more apparent in densely populated regions with intense industrial output, which inflicts the worst possible damage on the climate and the environment. As such, the U.S., as the world's largest economy, is the second-biggest emitter of greenhouse gases after China.

Squeezed between Western Europe and Central Asia, the wider Black Sea region borders Russia to the north and Turkey to the south. The area is the second-largest source of oil and natural gas after the Persian Gulf, has rich coal deposits and has a traditional adherence to fossil fuels. In the meantime, it has substantial renewables potential in hydropower, solar and wind energy. Together, these factors come to attention whenever climate change matters generate concern.

A matter of global concern

In December 2015, overwhelmed with a bright idea to save humanity from an imminent catastrophe, the countries and signatories to the U.N. Framework Convention on Climate Change (UNFCCC) met in Paris and recognized "the need for an effective and progressive response to the urgent threat of climate change on the basis of the best available scientific knowledge." They set a goal to achieve the level of global warming at significantly below two degrees Celsius by the second half of this century. As such, the Paris agreement became the first accord to bind developed and developing countries to a specific temperature goal. Through joining the agreement, its signatories pledged to decouple their prosperity and development from fossil fuel use and boost clean energy technologies. With this, they gave direction to the international community and impetus to scale up climate action.

Two years later, the progress that has been accomplished still looks quite modest, and this past November the parties came to Bonn to agree on a road map to meet the goal set in 2015. The forum noted its concern over time running out and a possible slowdown of the ongoing process due to a promised U.S. withdrawal from the Paris agreement. Last summer, U.S. President Donald Trump vowed to take the U.S. out of the Paris agreement previously signed by President Barack Obama, claiming a lack of benefit for the U.S. from participation in the accord.

Though in a position to withdraw the federal government from the agreement, the White House could do next to nothing to prevent 20 U.S. states, more than 50 of its largest cities and 60 businesses to go along with reducing greenhouse gas emissions in line with the accord. Together, they have an economic power of about $10 trillion to place them as a group behind only the U.S. as a whole ($18.6 trillion) and China ($11) trillion in terms of gross domestic product (GDP). A group calling itself America's Pledge announced its determination to stay in the Paris agreement at the November 2017 UN Conference on Climate Change in Bonn, and made a commitment to combat global warming in stark opposition to the Trump administration. Led by Michael Bloomberg, former mayor of New York, the group vowed to take measures such as reducing coal-fired power and investing in renewable energy and energy efficiency, which would substantially reduce their carbon output.

Challenges of the region

The climate change projections for the Black Sea region foresee significant impact on the environment in the coming decades. Climate changes will most probably affect the natural resources of the region, its economic activities and have miscellaneous repercussions for the well-being of the people.

"The climate changes are of a global nature [and] one region influences another," said professor Halil Sur, the executive director of the Istanbul-based Permanent Secretariat of the Commission on the Protection of the Black Sea against Pollution, while sharing with Daily Sabah the commission's situation assessments and expectations, "The Black Sea region is unique. Its basin is semi-enclosed and its catchment area is very wide. Therefore, [climate change] effects may be seen earlier than in other parts of the world. Certain [dangerous] consequences – the level of sea and seawater temperature could rise – the changes could affect Black Sea biodiversity, which was originally less rich than of the Mediterranean Sea. The experienced changes are of a global and cross-cutting nature. That is why all the coastal countries have come together to try to solve the Black Sea problems."

Referring to the Black Sea Convention drafted 25 years ago, Irina Makarenko, the pollution monitoring and assessment officer of the commission's Permanent Secretariat, said: "Back then, climate change issues were not really reflected in the text of the Bucharest Convention and its protocols. The first time climate change appeared in our documents was in 2009, in the Strategic Action Plan for Rehabilitation of the Black Sea, though without mentioning the concrete measures for climate change adaptation or mitigation. … At the same time, indirectly we are dealing with the climate change issues through activity of our advisory groups on fisheries, pollution and biodiversity, etc. The trans-boundary nature of events makes them difficult to monitor.

"We are currently finalizing our State of Environment Report for the past five years and it may have some recommendations and conclusions on how climate change affects the [Black Sea] environment. We believe that climate change should be discussed more, though it's been indirectly discussed at many places and referred to by all our recent documents by mentioning something similar to adaptation and mitigation measures. There is no solid document yet to provide a clear understanding of how the matter will be regionally solved, because our industries are not very interested in doing research on the implications to biodiversity, for example. So, there should be some policymakers who analyze the problem and elaborate certain documents to follow."

Climate change in the Black Sea region is a complex and danger-prone phenomenon requiring a set of adaptation and mitigation measures. While in full agreement, Sur said that "all depends on the countries. Honestly, I don't think there will be any benefit in establishing an independent body or commission]. It's better to use what presently exists. For example, the European Commission could urge its members, like Romania and Bulgaria, to take measures to make their industries do something to prevent atmospheric pollution, which is linked to the climate change. Many things could be done, if the European Commission follows its commitments under the Paris agreement, which would be a step forward in the agreement's implementation. In this way, Bulgaria and/or Romania, EU member states, could bring the issue to our agenda and the [Black Sea] commission could discuss it and engage our advisory groups to elaborate on how we see the implications of climate change on the region, on sea level changes, on seawater temperature changes, on acidification level – all these things are in fact interlinked. The Black Sea Commission Permanent Secretariat is very eager to look into all these matters in close detail, but the countries should agree to incorporate the issue onto our agenda.

"Industry should be dealt with, first of all, because some industrial countries are not very willing to deal with the issue, which is why some measures should be taken first of all by the industries."

The danger of an irrevocable change

"Environment is for all of us and not for the selected few," Sur said. "If someone ignores the issue, it will affect not only him or her, but others as well, since these kinds of things cannot be confined, I mean on the regional level. These are serious things. People have come to understand that at a certain point, if nothing is done today, the process will become irreversible, when it'll be too late to do anything, even if one stops all the industries, it'll be a hopeless situation. I hope we won't reach it. This decrease of temperature to 2 degrees Celsius [proposed by the Paris Agreements] is a good idea, I hope it can be done, the effect would be good for all of us and for our precious environment."