Turkey's position on the Syrian war from past to present 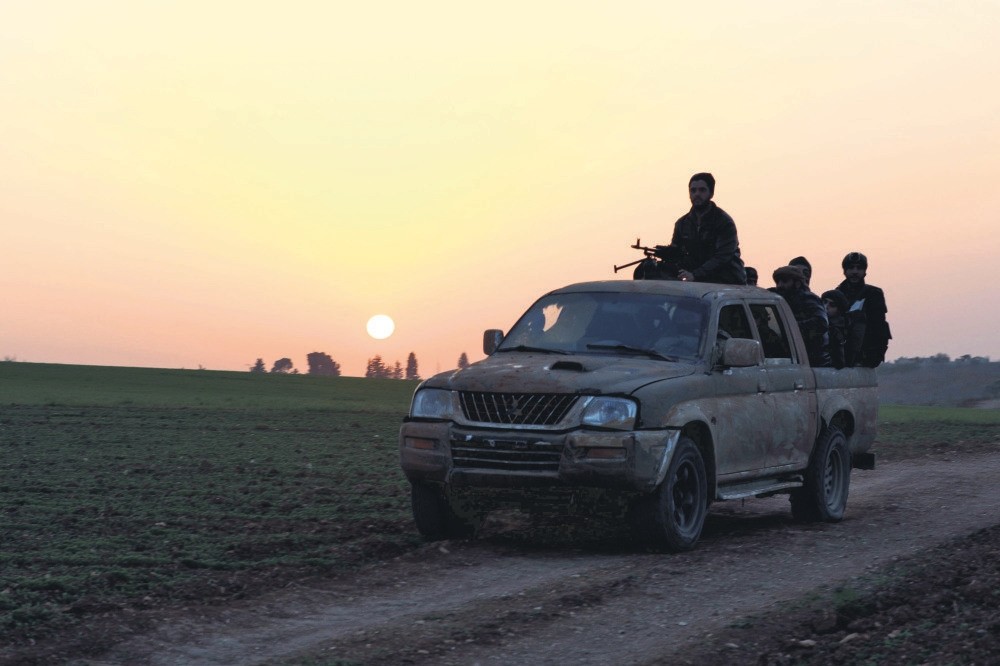 Opposition members head towards the village of Al-Khuwayn during battles with regime forces in Idlib, Jan. 13.
by Enes Yalman Jan 16, 2018 12:00 am

The changing balances in Syria have caused all actors, including Turkey, to recalculate their policies for the region

With the arrival of the Justice and Development Party (AK Party) in Turkey, a definitive policy of rapprochement and restoring ties was taken toward Middle Eastern peoples and states. The Bashar Assad regime in Syria represented one of these cases. In 2009, relations peaked between Turkey and Syria with deeper strategic relations and the lifting of visa requirements between the countries. With the outbreak of the Arab Spring and the swathe of blood left by the Assad regime's crackdown on the demands of its people for freedom and justice, Turkey was left with no choice but to support the Syrian people and stand in the way of a regime that held only death and destruction in store for its people.

In this way, Turkey adopted the Syrian revolution and embraced the opposition from the outset. In time, however, the Syrian issue reached unimaginable heights of complexity with overlapping regional and international interests and the awakening of age-old historical conflicts, forcing the Turkish leadership to search for new solutions to safeguard the Syrian people and find a gentler solution to their plight.

In this regard, the Turkish situation in Syria has undergone successive developments. Turkish policy moved from initially demanding radical reforms with the onset of the Syrian civil war to supporting the opposition and accepting a political solution conditional upon Assad's departure. This led to a heightened interest in ensuring Turkish domestic security and protecting its security and borders from terrorism, to strategically leveraging relations that would prevent further bloodshed and end the humanitarian crisis.

In light of the recent past, it is no secret that the most decisive blow to the Syrian revolution was the fragmentation of the Syrian opposition's factions due to conflicting supporters and objectives. For all intents and purposes, however, the Syrian people paid the price for this in blood after politicized support shattered the opposition and paved the road for the regime and its allies to restore the majority of its territory after it had been liberated at a heavy price by a once unified opposition. Taken objectively, the Assad regime and its allies were coherent and clear-sighted. In this respect, Iran supported and fought to preserve the Shiite crescent that now extended from Iran through Iraq and Syria to Lebanon. Russia provided air power that proved decisive in controlling the movement and retreats of factions on various fronts, and has been supporting the regime's advances with the interest of reaching the Mediterranean where they would establish the Tartus and Khmeimim bases. This only further complicated the scene, forcing Turkey to reconsider its approach in Syria. To best comprehend the depth of these changes, one must understand the conflicting interests.

Perhaps foremost among the key actors in this crisis is the United States. As a superpower, it has traditionally intervened in sensitive affairs the world over. One cannot overlook the fact that the cornerstone of its foreign policy has always been to protect its allies in the region, most notably Israel. Given Assad's aggressive policy toward Israel, the United States was compelled to weaken the regime, notwithstanding Syria's association with Hezbollah. In this regard, American public opinion was entrenched against Assad's crimes, an enabling factor for U.S. decision makers. More critically, the United States has long viewed the political Islam visible in opposition forces at some point as a threat to its influence in Syria.

In sharp contrast to this, Moscow views Syria as an important strategic dimension to its foreign policy and a means to expanding the sphere of its influence through the Tartus and Khmeimim military bases on the Mediterranean with the access and natural gas resources that this provides. The Assad regime adopted a balancing policy with Russia, which leaped at the opportunity to fill the vacuum left by the United States. In the same way that the Gulf is in the grip of U.S. influence, Russia has found its base in Syria.

Relevantly enough, Iran has worked tirelessly to expand its influence in the region since its revolution in 1979. The Assad regime supported its sectarian project, particularly when Iran gave him the green light and freedom to act as he saw fit, even at the expense of the Syrian people. Iran committed itself to demographic change in the country to protect Shiite seminaries and shrines. To this end, it seeks to secure access to the Mediterranean Sea and support the Shiite forces in southern Lebanon.

In light of these relations, the Assad regime adopted a hostile stance against Saudi Arabia and the United Arab Emirates. As a policy, the Gulf countries viewed the political brand of Islam arising from the Arab Spring as a significant threat to their stability and the status quo and did not welcome Turkey's early reaction to the Syrian revolution. Saudi Arabia views Iran's Shiite expansion as an existential threat, which explains why the two countries continue to indirectly support the revolution.

The Arab Spring was not without support, two of which clearly rise above the rest. Turkey and Qatar expressed strong sympathy for the Arab Spring and sought to back forces of moderate political Islam. They expressed positive support for the Syrian revolution. However, given that Turkey shares a long border with Syria, the protection of its national security is crucial, in addition to the fact that the PKK terrorist group has a strong presence in the region through affiliate organizations.

Looking to the significant outliers, Israel's role in the Syrian civil war is often underrated.

Many believe that the Assad regime and its allies, Iran and Hezbollah, are historical enemies of Israel, especially since the occupation of Syria's Golan Heights. In this sense, it is only natural for Israel to stand against the regime and contribute to its overthrow as it poses a threat to its security. Others, however, especially opposition factions, believe that the regime protects Israelis. It has accommodated the occupation of the Golan Heights for more than four decades without firing a single shot at the occupiers. Instead, it turned its arsenal on the Syrian people. This behavior is often cited in support of their claim.

Looking further beyond, the Egyptian government headed by democratically elected then President Mohammed Morsi strongly supported the revolution. However, the military coup in 2013 saw a shift of power to Abdel-Fattah el-Sissi occupying the presidency of the country. This led to a shift in Egypt's policy in the opposite direction. In turn, this has caused a steep rise in the level of extremism in Syria as a reaction to the failure of moderate Islamists in Egypt.

In light of this complex web of support and opposition, the effects were nonetheless similar. None would deny the role of the Syrian opposition in creating chaos in the country. The weakness of the opposition can be attributed to their division and fragmentation in terms of goals and objectives. The interests of their backers led to divisions and the absence of a unified political and military vision. Turkey has not managed to unite the forces of the revolution nor have political forces agreed on a common vision. As such, Turkey was among the few parties with tangible efforts to unite the opposition. These efforts were thwarted by Iran's unwavering support for the Assad regime and the Russian intervention with military and air support. The rebels could not withstand Russian airstrikes, and the use of the veto a staggering 11 times at the U.N. Security Council complicated things further.

Despite the lenient international positions on Assad, Turkey tried to build common ground with the Syrian revolution and fought to liberate the Syrian people from tyranny. Turkey pursued all possible avenues, but the conflicting interests and visions of the many parties involved in the crisis prevented them from achieving what they wanted.

'No future for Assad'

The U.S. did not express a clear position on the Syrian revolution. On several occasions, the U.S. administration indicated that there is no place for Assad in the future of Syria. This was a convergence with Turkey and worked to support the opposition. However, over time, Ankara uncovered a lack of seriousness from Washington, with more talk about the priority in Syria being to combat terrorism and eliminate Daesh. In this vein, the U.S. began reducing the number of statements on Syria. It soon moved to supporting PKK-affiliated factions in Syria, while well aware that this posed a direct threat to Turkey's security. To Ankara, the U.S. position was the straw that broke the camel's back. As for Turkey's efforts with Saudi Arabia and the United Arab Emirates, both Arab nations sought Assad's dismissal, yet at the same time did not want to strengthen or fuel the Arab Spring and see Islamists come to power. At this critical convergence of contexts, Turkey understood that there was no real opportunity for cooperation with these countries. Their stance on the failed coup in Turkey would perhaps only go on to support this argument.

All this and much more prompted Ankara to revise its policies and improve its relations eastward, particularly with Russia, as a last resort. In this light, we cannot forget the prominent role Turkey has played in protecting the Syrian people. For Turkey, it has always been and will continue to be a matter of principles. This position has not changed in any way, despite the clear lenience of the international community with Assad. Turkey still refuses to sit with the regime at the table and is determined in its pursuit to righting the balance in the region in favor of the people.