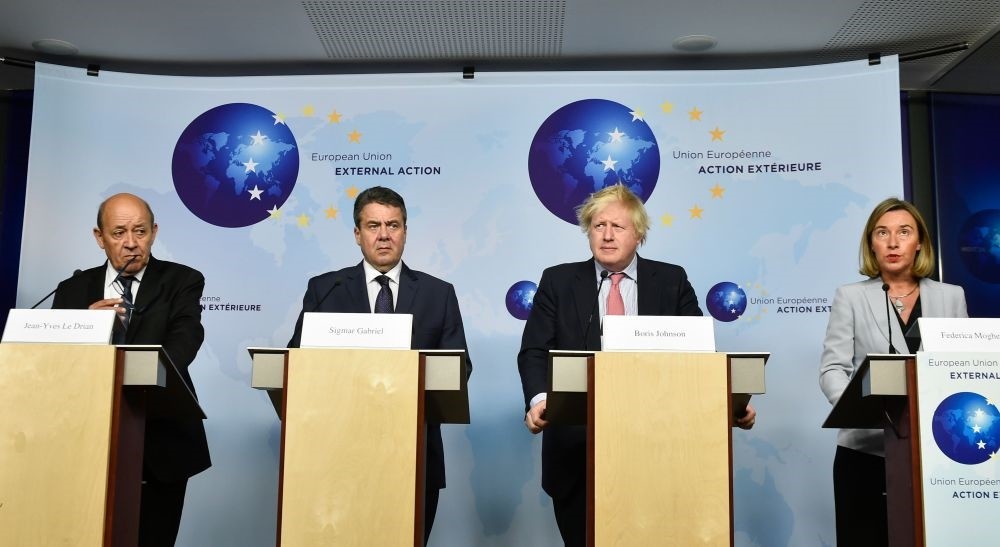 Germany, as the most important economic power within the European Union, has been taking more responsibility in certain situations, especially when it comes to crisis management and foreign policies that involve shared interests of all 28 member states. Germany's response to the collapse of the Iran nuclear deal can be seen as a reflection of the nation's commitment to international governance/cooperation and economic interest in the region.

Being one of the founding fathers of the European Union, Germany has been heavily involved in recent decision-making processes, including EU policies directly related to crisis management. One of the most critical ones was Germany's attempts to impose EU sanctions on Russia, with the support of French President Francois Hollande, while trying to find a diplomatic path to resolve the Crimea conflict (Minsk-2).

Arguably the most talked about was Germany's major role during the discussions for an EU financial assistance program for the still unsolved Greece depression. Germany provided funding over a five year timeframe, either directly or through the International Monetary Fund (IMF) or the European Stability Mechanism.

The most recent one was in 2016, when Germany negotiated the "one in, one out" Syrian refugee deal with Turkey on behalf of the entire EU.

Stance on the nuclear deal

Germany's position toward the collapse of the Iran nuclear deal can be summarized in two main goals.

Firstly, a unified European response is needed to safeguard the international nonproliferation regime and to seek a return by all parties to the terms of the Joint Comprehensive Plan of Action (JCPOA), which is a result of a 13-year diplomatic process. The EU's ability to speak with one accord and therefore portray unity gives the confederation greater weight in the international arena. A return to the principles of the international governance and the common foreign and security policy is needed to maintain a diplomatic and political foundation.

Secondly, reestablishing the strong diplomatic ties between the EU and the United States is needed in order to prevent the deviation of the EU from the U.S. and also to prevent U.S. President Donald Trump from possible sanctions against Iran.

Focusing on the many shared features, common goals, values of democracy, rule of law, human rights and free market economies is not only necessary to find a healthy solution on this issue, but will also encourage a reduction in tensions in the Middle East region. "Conflict prevention" has been a part of the EU foreign policy since the Cold War and continues to be a goal.

The nuclear agreement made between Iran and Germany, France, the U.K., China, the U.S. and Russia is an act that increased the possibility of a regional detente via diplomacy and created new economic relations. Emphasizing the affirmative attainment during this process and enhancing the relations between the involved countries is therefore an auspicious option for stabilizing the Middle East region again.

Germany will stand by the JCPOA

As a key member of the EU, Germany has been in favor of a common foreign and security policy, while supporting the idea of a credible secretary general/high representative. In this risky case, a different approach seems plausible. As a first step, the three foreign ministers of Germany, France and the U.K. tried to find a joint solution by mediating with officials in Washington. This process will not only help to achieve the first goal of building a European coalition, but also to strengthen the ties with the U.S. and overcome possible escalations and misunderstandings.

After all, Germany shares the concerns of the U.S. about military activities in Iran as well and finds it important to address these issues in close cooperation with the U.S. Unfortunately, the U.S.'s policy toward Iran is not a strategic path of foreign policy. The crisis is caused by President Trump's attempt to destruct everything former President Barack Obama launched.

The Iran nuclear deal has been of great importance for Germany from the very beginning, since the government takes into consideration the direct effects on its internal and external structures along with the effects on the EU.

A possible military intervention in Iran would lead to a major destabilization of the region and the destruction of a historical diplomatic and economic relationship between Germany and Iran. In 2005, Germany was Iran's most important trading partner and ever since the JCPOA, the aim of rebuilding a strong economic relationship again, was in full effect. German exports to Iran have been rising ever since. A military intervention could also potentially lead to a long-term problem in many aspects, such as in Iraq or Afghanistan.

The destabilization could possibly lead to another refugee crisis for the EU. Germany is currently hosting around 600,000 Syrian refugees and has been criticized for suspending the Dublin Regulations. The rise of the political right-wing in Germany is also being associated with the refugee crisis, among other factors. This could push the internal political dynamics into an extremist far-right movement.

A possible collapse of a 13-year long process of coming to an agreement would not only be a failure for international governance/relations and foreign policy, but it would also push nations such as North Korea away from negotiating an end to their own nuclear programs.

The U.S. is one of the most important allies for Germany. Therefore, a break of communication or a diplomatic crisis during the attempt to resolve this issue is not wanted. Otherwise, Germany will be forced to cooperate with Russia and China in order to maintain the Iran nuclear deal.