New phase of Turkey's struggle for its security in Syria 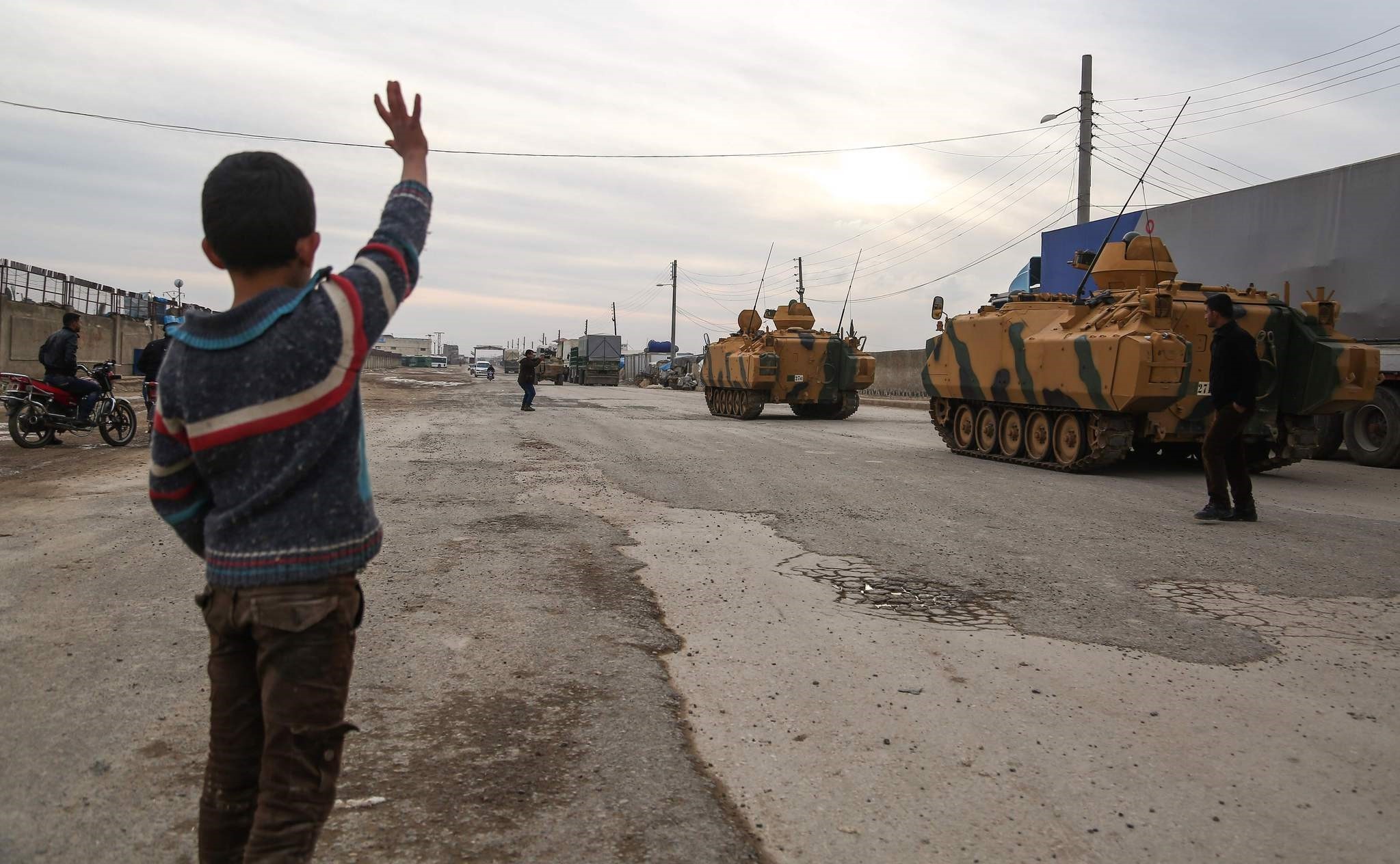 A boy waves at Turkish armoured vehicles passing through the Bab al-Salamah border crossing between Turkey and Syira, Jan. 21.
by Talha Köse Jan 23, 2018 12:00 am

Turkey initiated its Operation Olive Branch against the People's Protection Units (YPG) in the Afrin canton in northern Syria on Jan. 20. Turkish authorities had been talking about a military operation against the YPG for the last several weeks. Turkish military and Free Syria Army (FSA) units had been preparing for an operation for a long time. Trying to avoid unnecessary tensions with its partners in the Astana talks, Turkey continuously informs Russian and Iranian authorities about the operation. It is a very risky operation, but it is critical for Turkey's national security and long-term diplomatic objectives.

Turkey's goals in the Afrin operation are clear and limited. It is to clear its border from the control of terrorist elements that threaten its national security and territorial integrity. Turkey also aims to prevent the formation of a YPG controlled quasi-state that has access to the Mediterranean Sea. The emergence of such a hostile political entity or autonomous unit along its southern border may change the status quo against its interest and isolate Turkey from the rest of the Middle East. Prevention of another inundation of refugees to its borders is also another sensitive issue that is haunting decision makers in Ankara. Turkey also wants to play a more active and influential role in reshaping the political future of Syria in the diplomatic arena. Turkey's involvement in the Astana talks together with Russia and Iran was a significant step for the country to play a more constructive role in shaping the future of its neighbor Syria. Having a military presence in the field and limiting hostile elements militarily stood as the most effective way to boost Turkey's diplomatic position.

Turkish authorities tried to explain these challenges their country is facing because of the ongoing civil war in Syria to its NATO allies and neighbors, especially over the past year-and-a-half. Instead of helping their ally Turkey to deal with these problems, the U.S. in particular increased its collaboration and partnership with the YPG. The fight against Daesh was the magic word that legitimized the collaboration of the U.S. with the YPG and Democratic Union Party (PYD). Daesh suddenly evaporated in Raqqa with a mysterious deal between the U.S.-Syrian Democratic Forces (SDF) coalition and Daesh militants.

For years since the former President Barack Obama's administration's policy change in Syria, the major international actors have abandoned the moderate opposition and moderate Kurds in the Syrian civil war in the field. They found neither the diplomatic support that they needed to influence the political processes nor the military aid and equipment to defend themselves against the extremist forces and the inhumane attacks from Bashar Assad's regime. They have been left to the initiatives of extremist terrorist organizations such as Daesh, the YPG, al-Nusra Front and others. Civilians under pressure from both regime forces and terrorist organizations had to either leave their homes and flee – many to neighboring Turkey – or live under the pressure of these extremist forces. Turkish authorities have been disturbed and negatively influenced by both of these developments. Turkey now has close to 4 million Syrian refugees who cost Turkey billions of dollars. But more importantly, Turkey neighbors a terrorist organization on its southern border. There was a broader international coalition against the challenge of Daesh, but Turkey was abandoned in its fight against the PKK, whose Syrian affiliate YPG was heavily armed, trained and diplomatically supported by the U.S. The Pentagon's declaration of its plan to create a border security force in northern Syrian with the YPG was the last effort that swept away the already weak trust in Turkey against the U.S.

In the last couple of years, the YPG was engaged in systematic demographic engineering to create a zone that is under its control. Arabs, Turkmens and moderate Kurds who were members of other organizations were forcefully evacuated or forced to work under the PYD. Those who did not play the PYD's game had either fled to Turkey or escaped to some other place. The YPG radicalized the remaining people under its control and forcefully conscripted underage children to fight in its ranks. U.S. special forces and defense companies supervised and trained these troops under the pretext of fighting Daesh. Contradictory statements from U.S. authorities imply that Washington has long-term plans with the YPG. Turkey wants the ending of this demographic engineering and radicalization along its border and wants at least some of the refugees to return to the places where they were forcefully evacuated. Operation Olive Branch aims to contain the YPG and limit its maximalist objectives. Also, targeting the YPG and damaging it militarily will increase defections from this group.

Operation Olive Branch is a more difficult operation in comparison to Operation Euphrates Shield because both Daesh and the YPG are terrorist organizations, but Daesh seemed to be a more legitimate target for the international community, whereas there is difference of opinion concerning the status of the PYD, even among Turkey's NATO allies. There may be more diplomatic pressure on Ankara to halt the operation. Another significant issue is the risk of Turkey's potential indirect confrontation with the U.S. in the field. Since the YPG is armed and trained by the U.S., Turkey may directly and indirectly confront the U.S. in the field. This confrontation may lead to a broader strategic rift between the two NATO partners. Another sensitive issue for Turkey is the YPG's use of civilian shields in urban warfare. The YPG will try its best to discredit Turkey's efforts, which is why it is more important to keep civilian casualties and the human cost to a minimum in order to keep the legitimacy of the operation. In comparison to its fight against Daesh in Operation Euphrates Shield, Operation Olive Branch is riskier, but both Turkey and the FSA units are technologically, diplomatically and psychologically more ready to confront the YPG in the field this time.