The Vatican and beyond: Europe's new political issues and Turkey 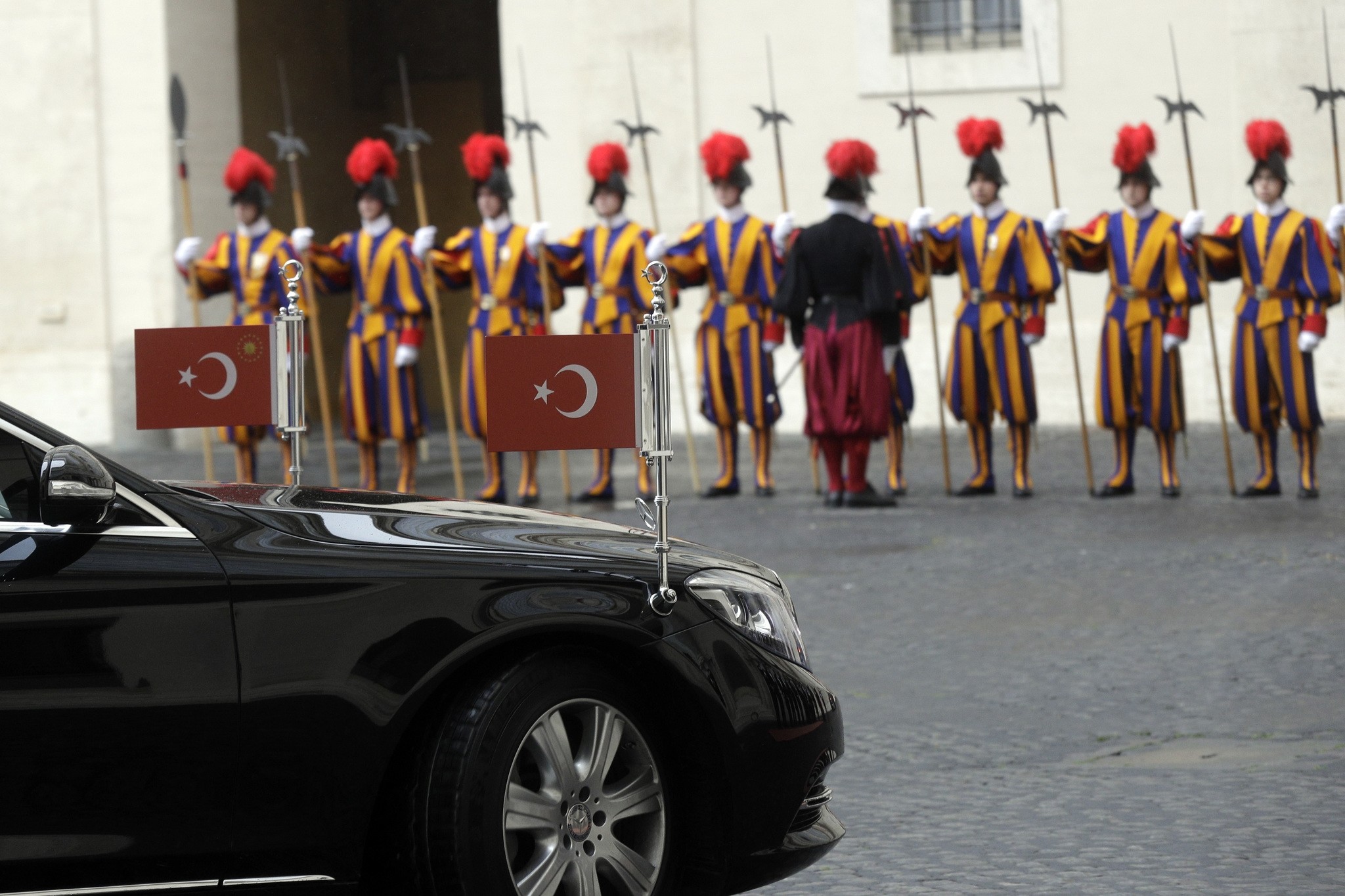 The car escorting President Erdou011fan arrives at the San Damaso courtyard ahead of his private audience with Pope Francis, at the Vatican, Feb. 5.
by Talha Köse Feb 09, 2018 12:00 am

President Recep Tayyip Erdoğan went to the Vatican to meet with Pope Francis. His official visit was significant because it was the first time in 59 years that a Turkish president has gone to the Vatican. Erdoğan was also representing the Organisation of Islamic Cooperation (OIC) at the meeting as its term president. The main issue was the recent crisis about Israel's efforts to claim Jerusalem as its capital and U.S. President Donald Trump's decision to move the U.S. Embassy to the holy city. This illegal move has the potential to trigger wider inter-religious and inter-cultural polarization that may affect billions of people around the world.

The Vatican and Ankara agree on the need to find a peaceful solution to the Palestinian-Israeli conflict on the basis of United Nations Security Council (UNSC) resolutions, but there are obstacles. Beyond the Jerusalem crisis, the dialogue between Ankara and the Vatican has the potential to mitigate many sensitive issues that Europe is facing.

The major, unspoken issue for many European countries is the changing position of the U.S. in promoting European security and the U.S.'s unwillingness to protect the liberal values and institutions that have provided safety and prosperity for Europe for the last several decades. The problems that the U.S. will cause by backtracking on its commitments to European stability need to be managed by widening cooperation with alternative actors and by strengthening cooperation within the EU.

However, the overall logic of European politicians' efforts is proceeding in away from this direction. European politicians are alienating potential partners like Turkey. European leaders are lacking clear direction in many of the sensitive problems the continent is facing, and the Vatican's position on some of these issues may be more important with these conditions. European democracies and norms are under the threat of these new challenges. Political fragmentation in Europe increased after the Brexit vote and EU member countries are much less united regarding Europe's security challenges.

Ongoing conflicts in the Middle East and the humanitarian crises in Syria and Myanmar were other significant issues brought up in the meeting. Pope Francis, who is known for his humanitarian sensitivities, expressed his gratitude to Erdoğan for Turkey's humanitarian aid to more than 3.5 million Syrian refugees in Turkey.

Turkey's leadership in the Jerusalem crisis and humanitarian efforts in the Syrian war makes it a relevant counterpart in the conflicts that are having impacts beyond their regional contexts. Migration and refugees from Iraq, Syria, Afghanistan, the Rohingya fleeing to Bangladesh and refugees from North Africa looking to get into Europe are changing the political context there. Turkey's readmission agreement with the EU was an important move that prevented further strengthening of anti-migrant parties and movements in Europe. Turkey's role in mitigating those humanitarian crises was not properly appreciated due to the media campaign against Erdoğan.

The two leaders talked about the sensitive issues and complicated security challenges of our time. Growing xenophobia, Islamophobia and radicalism around the world and the lack of systematic multilateral efforts to contain these problems are important concerns that threaten democracies and the cultural pluralism in the West. Both have a common interest in fighting against the problem of radicalism and extremism in the Middle East.

Rising levels of far-right and populist anti-immigrant parties and organizations are turning into a long-term security challenge for all of Europe. The Vatican is also concerned that Europe is on the path of turning to a political situation similar to that before World War II. Mainstream politicians are also weakening against populist movements and radical discourses. Rising radical right movements and parties and Islamophobia are also major political challenges for Ankara's relations with European capitals.

Debates related to Turkey's EU membership are usually instrumentalized, which further alienates Turkey's people from the EU. Ankara may also need the support of the Vatican to overcome some of the prejudices and discriminations that the country is facing. The dialogue between Turkey and the Vatican has value beyond the mere relationship.