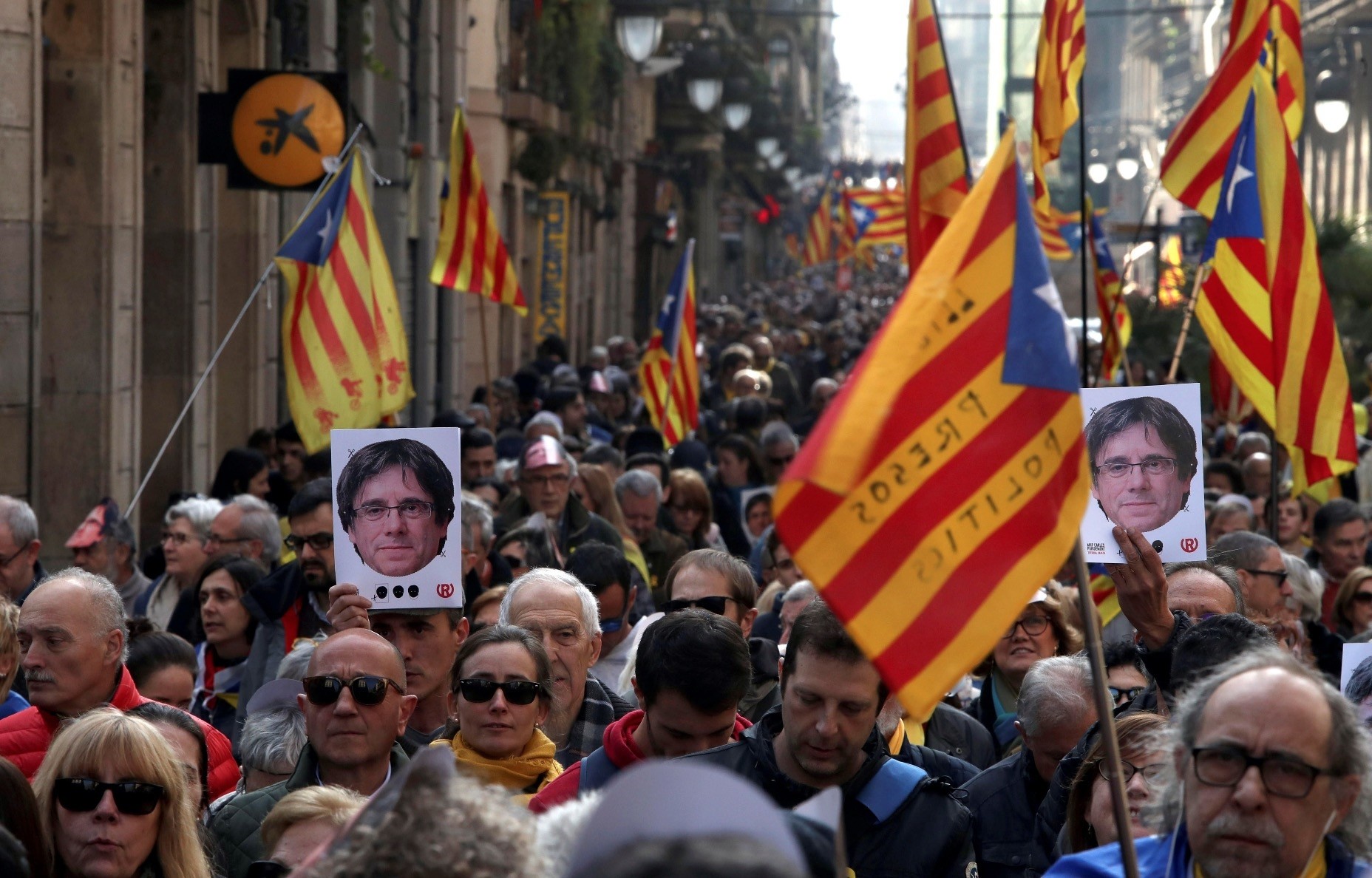 People attend a demonstration in support of former Catalonian President Carles Puigdemont outside the Catalan Parliament, Barcelona, Jan. 30.
by Karel Valansi
Feb 12, 2018 12:00 am

A wave of separatist ideology is still blowing through the whole of Europe; it hit Spain first with the Catalan referendum last year, but it is likely to target other countries, too

We are witnessing the rebirth of nationalism. This may be caused by the global economic crisis, wars, refugees, unemployment, fear for the future, dissatisfaction, poverty, intolerance… Whatever the reason is, the consequences are similar; political parties with populist and nationalist agendas are rising, xenophobia is more apparent. Countries in the European Union are no exception.

With the global economic crisis of 2008, which erupted shortly after the acceptance of the Treaty of Lisbon, many countries entered a period of recession. This was a consequence of the globalization that interconnected the world markets. At the same time, this crisis disrupted the integration process in the EU. As the unemployment figures rose, the dissatisfaction of the masses increased. The economic and monetary union made it impossible for countries to adjust their individual nationalist policies. This led to an opportunity for Euroskeptic leaders with anti-immigration, anti-refugee, anti-Euro, anti-EU promises to increase their voices and gain supporters. Their election victories increased nationalistic rhetoric in politics in any sense. Brexit can be seen as the dramatic result of many of these problems. The U.K. saw it as its last chance to gain back its sovereignty from Brussels. As for Spain, the effects of nationalism resulted with the independence bid of the Catalans.

Spain suffers from economic problems. According to the 2017 Index of Economic Freedom, Spain has a population of 46.4 million and the unemployment rate is 21.9 percent. There are ongoing structural reforms for its economic recovery. However, it is still vulnerable due to the high level of public debt that is close to the size of the economy. As for Catalonia, it is one of the wealthiest regions in the EU. But still, it seeks its independence from Spain, without leaving the EU. Catalans want to stay in the EU, however, there is no mechanism to achieve that desire.

For Catalans, ethnicity and language are the basis of their identity. They speak Catalan as well as Spanish. They are wealthier than any other region in Spain. They contribute more to the national budget but receive back less. They have the unhappy memory of dictatorship when their language, culture, identity and liberties were suppressed.

The 2008 economic crisis affected Catalans as well. Like Spain, Catalans suffered from the economic, social and political crisis that led to the questioning of the policies of the Spanish government. Additionally, stability measures linked to the eurozone crisis increased central control over autonomous regions, which in return encouraged populism and the rise of identity-based nationalism.

The region enjoyed a high degree of self-government regulated by the 2006 Catalan Statute. However, in 2010, the Spanish Constitutional Court partially outlawed it. Furthermore, the center-right People's Party came into power in 2011 with more conservative and centralist policies. The nationalist mobilization of the Catalans ended up with the bid of independence on Oct. 1, 2017.

Although Catalans were seeking independence from Spain, they always wanted to be part of the EU. In 2012, demonstrations in Barcelona, the slogan was, "Catalonia, a new state in Europe." This shows that the EU was successful in promoting the EU identity in Catalonia. It also shows that Catalans do not want to lose the benefits of being part of the EU. However, the EU has rigid rules as European Commission (EC) President Mr. Prodi had said in 2004, "When a part of the territory of a member state ceases to be a part of that state, because that territory becomes an independent state, the treaties will no longer apply to that territory," and as EC President Mr. Barroso has pointed out in 2012, "A new independent state would, by the fact of its independence, become a third country with respect to the EU and the treaties would no longer apply on its territory."

When the Catalan parliament declared independence from Spain after a disputed referendum in October 2017, Spanish police were mobilized to stop the voting and was blamed of using excessive force against civilians. Spain enacted Article 155 of the constitution allowing to take the control of Catalonia's government and Catalan regional President Carles Puigdemont fled to Brussels. Now, Catalans need to decide if they want to continue with Puigdemont, who is in a self-exile in Belgium and is said to have rented an apartment there or to find a new candidate for the role of president.

It was no coincidence that Puigdemont chose Brussels. He went to Brussels, the capital of the EU, to ask Europe to react. But the silence in Brussels and in other EU capitals especially after the police brutality was disturbing. The EU, on the other hand, was hoping for a dialogue between Madrid and Barcelona even when it was clear they would not talk. The EU rejected mediation appeals and restrained from interfering as it saw the crisis as an internal issue. It claimed this crisis was not within its institutional role. One thing was clear, the EU did not expect the crisis to go that far. But in the end, it could not accomplish its main mission to prevent the rise of nationalism and conflict within Europe.The EU does not have a clear answer to this crisis. Catalans' desire for independence is significant as it may trigger other independence movements inside the EU such as Basque, Scotland, Bavaria. This would be a new challenge for the EU to overcome. Still, the EU, a club of nation-states, does not want to be divided into dozens of statelets as it will be harder to control and much harder to cooperate.

The Catalan case is an example of how globalization and EU integration can result with secession demands. The economic crisis may be accepted as the catalyst behind it, although the history and identity of Catalans, as well as the centralist policies of the Spanish government, are the root causes. This example also shows that a region does not have to be very big and powerful to seek its independence. A region inside the EU has lower political and economic risks and can maintain itself easier than outside the union. This may lead to more demands for independence. However, the EU has no practical response to this trend that may continue to grow.

The author is a columnist with Şalom, a weekly Turkish-Jewish newspaper