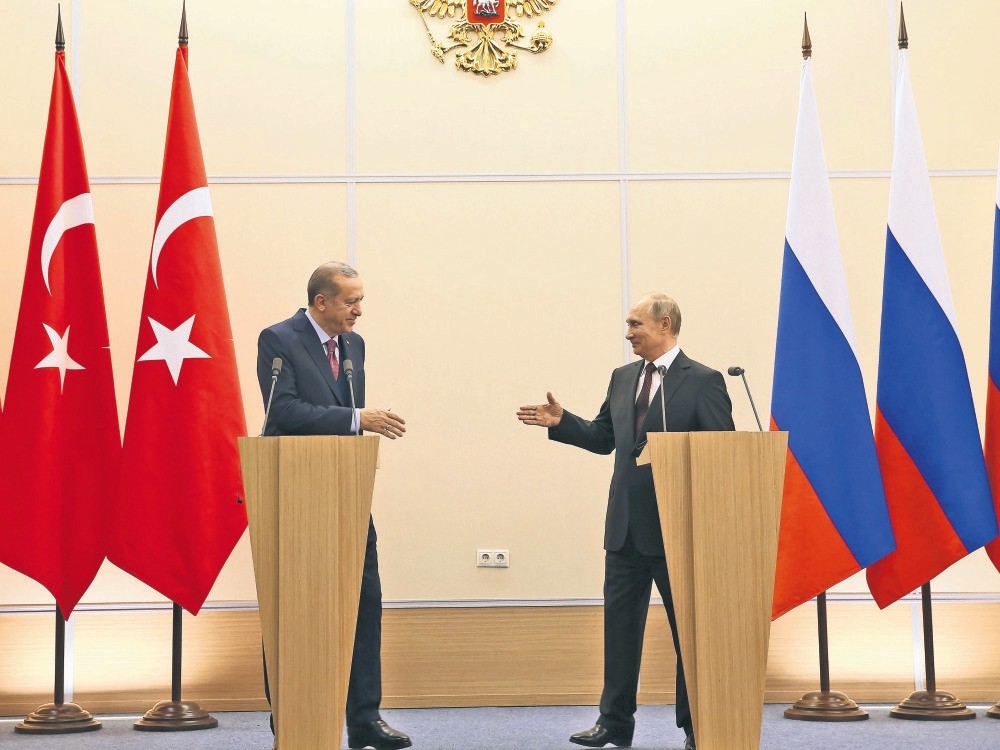 The Deash defeat in Syria, the successes of the Astana peace initiative and flourishing Turkish-Russian cooperation are some of the crucial developments of 2017. First among these is Turkey and Russia's blossoming interactions to buttress the Syrian settlement process sponsored by Turkey, Russia and Iran. Without Turkish-Russian rapprochement neither the Daesh defeat nor the Astana process would be achievable.

Russian President Vladimir Putin said on Nov. 13, 2017, when hosting President Recep Tayyip Erdoğan at his residence near Sochi, that Russian-Turkish relations could be considered fully restored. Besides returning to normal, Turkish-Russian relations in 2017 acquired a depth and dynamic that they had never experienced before and their progressive development is expected to continue in 2018.

Last year, tourism alone experienced quite a boost from Russian tourists to Turkey, exceeding 4.5 million people, a huge increase in comparison to the 866,000 in 2016. During the first 10 months of 2017, the bilateral trade volume increased 36 percent to $15 billion, and its annual volume was $15.8 billion for 2016. Turkish agricultural exports went up 1.8 times during the first eight months of 2017 and restrictions on exports of agricultural goods, including tomatoes, were fully removed toward the end of the year.

Energy was another beneficiary in 2017, with the construction of two lines – 15.75 billion cubic meters each – of the TurkStream pipeline proceeding at full speed. When completed, the pipeline will contribute to Turkey's energy security while diversifying Russian gas deliveries to European countries. Construction of the Akkuyu nuclear power plant has gained momentum as well and the prospects of early commissioning of Turkey's first nuclear reactor are running high.

The most striking development was in procurement of military technologies and equipment. Ankara finalized a $2.5 billion deal on purchasing two Russian-made S-400 missile defense systems along with assembling another two domestically using Russian technology. With this, Turkey will become the first and only NATO country to protect its airspace with the Russian-made S-400 anti-ballistic missile system.

Regional stability of high priority"We have virtually stopped a fratricidal war in Syria through liquidating terrorists and making it possible for civilians to return to peaceful life and restore their country," Putin said on Sep. 29, 2017, in Ankara.

Regional stability is a priority for both countries. While in Sivas on Dec. 10, 2017, on the eve of Putin's visit to Ankara, Erdoğan spoke of the situation around Syria and Jerusalem as matters for their consideration. "Our consent in political matters positively affects cooperation in trade, tourism and energy," he said after the meeting.

The war in Syria against terrorism is not over, and the defeat of Daesh has not brought peace to the country. With Daesh mostly defeated, the presence of the Syrian Democratic Forces (SDF), controlled by the Democratic Union Party (PYD) and the People's Protection Units (YPG), comes is on the agenda of the alliance of Turkey, Russia and Iran. U.S. support to the SDF is of particular concern for Turkey. Ankara strongly opposes it, saying it contributes to the threat to its national security. In pursuit of protecting its southern border, Turkey launched Operation Olive Branch on Jan. 20 to clean Afrin of the YPG presence.

Afrin offensiveOperation Olive Branch is a third offensive by the Turkish military into northern Syria, and its mission is to ensure Turkish border security. In August 2016, Turkey launched Operation Euphrates Shield to clean Daesh from 2,000 square meters of northern Syria on the border with Turkey. The operation was a success and it led to the strengthening of the Free Syrian Army (FSA,) which is currently an effective fighting force against the YPG in Afrin.

The operation's success has contributed to Turkey's position as a key player in Syria and its growing influence on Syrian opposition groups. As such, it granted Ankara new leverage in the Syrian peace settlement process in Astana with Russia and Iran in January 2017. Besides establishing a cease-fire in many trouble spots in Syria, the Astana talks resulted in the creation of de-escalation zones and culminated in the Sochi summit between Turkey, Russia and Iran in October 2017.

The military success accomplished in Syria in 2017 is the end result of Turkey, Russia and Iran's efforts from the Astana peace settlement process. Designed as a supplement to the U.N.-sponsored Geneva peace talks, the Astana talks have virtually brought them back to life. As a follow-up to the Astana talks, the tripartite alliance of Turkey, Russia and Iran launched another Syrian settlement initiative in Sochi this past January on the new political future on this country.

Building Syria's political futureBuilding an irreversible and lasting peace in Syria is a thorny process, burdened with pits and holes, feuds and enmity. But it has to happen to lead to a political settlement under U.N. supervision in line with U.N. Security Council Resolution 2254.

With this in mind, Turkey, Russia and Iran convened the Congress on Syrian Political Dialogue on Jan. 29-30 in Sochi. Masterminded by Russia and Putin, the congress was an opportunity to give a boost to the U.N.-sponsored Geneva peace talks between the government and the opposition. Sochi was never considered a potential replacement for these negotiations, and even less, as a means to try to settle the Syria conflict.

Another and no less important result is an agreement reached by the congress delegates on the potential members of the Syrian constitution commission to be assigned to work out a new charter. Out of 150 candidates, two-thirds represent the current government and moderate national opposition. Their names were handed to U.N. representative Stefan de Mistura for consideration to select the commission's 45 to 50 members, making work on a constitution a top priority in the peace building process.

According to de Mistura, the decisions contribute to a political settlement under the U.N., which shows the U.N.'s recognition of the congress as a legitimate mechanism. It was largely a product of compromise reached by Turkey and Russia regarding the actual delegates' attendance. Presidential spokesman İbrahim Kalın has continuously reiterated that "no terrorist group can represent the Syrian people, the PYD or the YPG cannot represent the Syrian Kurds." Russia appreciated Turkey's uncompromising position on the issue.

The Middle Eastern context of Turkish-Russian cooperation is overloaded with bias, double standards and unpredictable turns of events. Still, a lot remains for the countries to achieve before peace finally comes to Syria. The war, now approaching its seventh year, has displaced 5.4 million people from the country, including 1 million refugees in Lebanon and more than 3.5 million in Turkey. Another 6 million are displaced inside Syria. Flexibility and compromise have to continue to remain part and parcel of the Turkish-Russian interactions concerning regional security.