Frère Tariq Ramadan and the false promise of laicité in France 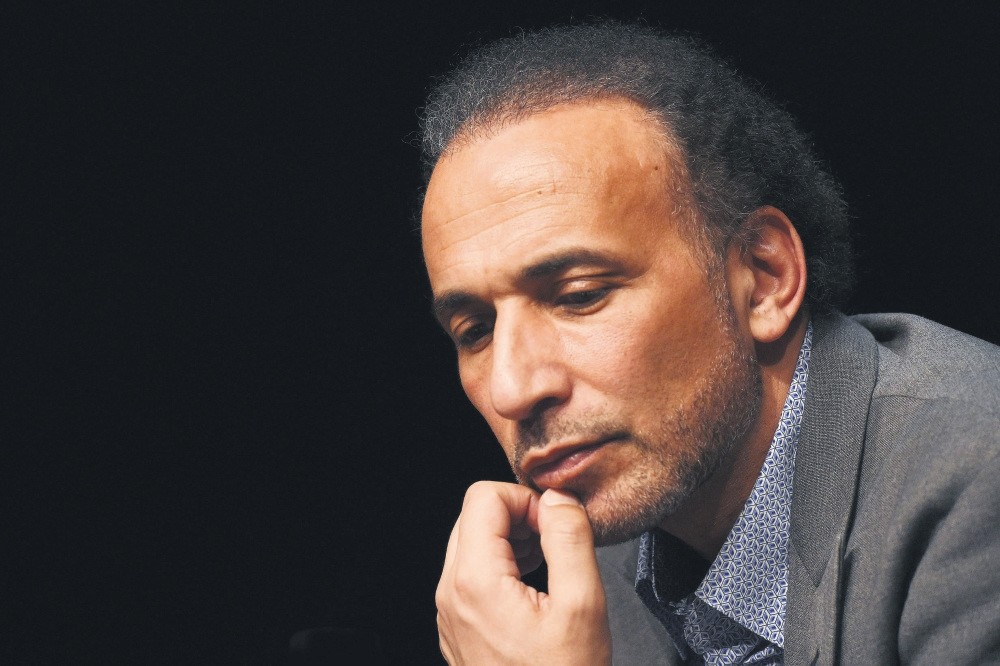 Liberté. Égalité. Fraternité. Empty words, without resonance. These high-sounding, haughty and lyrical words fall on deaf ears; proving only disharmonic for today's racialized French communes or banlieues. Yet, they still do serve ambitious purposes, reminiscent of France's lost Empire: The continuous invention of their imagined "color-blind" community and lofty ideals, to claim the moral high ground, with which to usurp another's rights.

After all, there is no nastier tyranny than that perpetuated under the molested appellation of Liberté; no treachery more harmful than that under the shield of Égalité; And, no more grandiose personal ambition than that concealed in the moral, universal purposes of Fraternité. Oh, the grandeur of France! Victor Hugo, in Mes fils (1874) audaciously describes it - the prodigious French burden: "servir la patrie est une moitié du devoir, servir l'humanité est l'autre moitié,"- serving the homeland is half of duty, serving humanity is the other half. What virtuoso!

Sadly, a tragedy of epic proportions ensues, as France is no longer charitable enough to overlook those boisterous noises and wretched smell. And, in their privileged wrath only the worthy should suffer indignities from their noble hands. It is an honor, we've been told, to submit to their will. After all, "gods" demand worship, particularly small ones, and are infuriated when shunned - as is the rising penchant. Afraid, then, of losing control, it enacts anti-terror laws, to safeguard its sanctimonious freedom and punish those daring to choose another deity. That is how their freedom disregards the most disenfranchised, alienated people laboring on its cobblestone streets. De Gaulle roars, "France cannot be France without greatness."

Everyone, man, woman and child, must feel its greatness; if not, then its fury. So, in that vein, those lost in delusions of grandeur reveal themselves by stealing blankets from trembling refugees as they sleep under a cold Parisian sky; by cruelly laughing at a distraught refugee women while, allegedly, kicking her child in a stroller; through complicity, in act or indifference, to the sexual molestation of refugee children in the notorious Calais camp; and, now, by the awful imprisonment of an unwell Tariq Ramadan - left in solitary confinement, without charge, based on unsubstantiated claims and flimsy evidence. Regarde moi! France no longer has the strength to be French! No longer has the courage to uphold its own convictions!

The origin of this maladjustment is in the purported invisibility of the "Other," which occupies a central position in the French political and legal culture. And, it is intended to ensure equality before the law and, consequently, in social life. As Simon (2008) writes, in "The Choice of Ignorance: The Debate on Ethnic and Racial Statistics in France," "Equality through invisibility - if we were to summarize the Republican strategy into a slogan - requires that ethnic and racial divisions not be represented."

This uniquely French creed, the avowed indifference to differences - the French color-blind approach - leads to, as Simon (2008) states the deliberate choice of ignorance by removing any reference to ethnic or racial origin from policies or laws. But, it has failed - miserably. And, France would do well to see that failure for what it is. Instead, it haphazardly carries forward, ignoring its own rules and regulations, to extraordinarily assign the Paris prosecutor Francois Millon to Professor Ramadan's file - who is France's leading anti-terrorist magistrate. In fact, he is responsible for the files dealing with major attacks in France. Why would he be involved in this?

At the moment, Tariq Ramadan stands accused of two counts of rape - but he has not been charged. In France, the prosecutor has the authority to announce charges - but they are not official. That occurs in the second stage, by a judge, who will either confirm or dismiss. As of now, neither has occurred, since the prosecution has not provided sufficient evidence. In lieu of that, inexplicably, he has been denied bail and remanded into custody.

More strangely, who are his accusers? First, Henda Ayari, a self-described lapsed Muslim and former Salafist, who claims Professor Tariq raped her in 2012. However, she reportedly approached Professor Tariq in 2014, sending 280 messages on Facebook, self-admittedly, in attempt to seduce him. Are those the actions of a woman who claims she was raped? Does a victim of rape, reach out to the offender and attempt to seduce him two years after the assault? Perhaps, this explains her absence when French police summoned her during Ramadan's hearing on Feb. 2, 2017.

More troubling, the second accuser, "Christelle" alleges that she was raped in a hotel in Lyon, in the afternoon, Oct. 9, 2009. In response, Professor Ramadan's defense attorneys, Yassine Bouzrou and Julie Garnier, provided an airline reservation showing that Professor Ramadan's flight from London did not arrive in Lyon until 6:35 p.m. and he was in a lecture hall by 8:30 p.m. to give a speech to hundreds in attendance.

Although this crucial piece of evidence was provided to the French police, and they subsequently confirmed receiving it, the police later suspiciously claimed that it was "missing" from the case file. This major discrepancy appears not to have been taken into consideration, neither in the prosecution's decision to press charges, nor in the examining magistrates' decision to continue unjustly holding Ramadan in prison. It is inconceivable that Ramadan could have been in Lyon at the time Christelle says, which throws her entire testimony into disrepute.

In fact, both accusations seem to be not only without merit, but directly contributing to the falsification of Ramadan's stature and intentionally misleading people. Even though, with a chronic medical condition, he remains in solitary confinement in a high security prison in France, and his family has been denied access to him. This could go on for up to a total of two years, without charge. Is this the greatness that is France?

All this points to troublesome developments in France. And, as Arundhati Roy eloquently states in Capitalism: A Ghost Story, this dangerous and ruthless form of Islamophobia is directed, not just against Tariq Ramadan, but Muslims, especially Muslim women. "An attempt is made to coerce women out of the burqa rather than creating a situation in which a woman can choose what she wishes to do, it's not about liberating her, but about unclothing her. It becomes an act of humiliation and cultural imperialism. It's not about the burqa. It's about the coercion. Coercing a woman out of a burqa is as bad as coercing her into one." And, this coerciveness is perceived as magnanimity in the glaring blindness of Laicité - where freedom is constricted to what others deem it to be.

Lastly, this matter is not solely about Tariq Ramadan, but about the presumption of innocence, due process and the hypocrisy of France. "But then I sigh and, with a piece of scripture, tell them that God bids us do good for evil; And thus I clothe my naked villainy, with odd old ends stolen out of Holy Writ, and seem a saint when most I play the devil." Consider this, every society needs "scripture," whether it is Bible, Quran, Torah, a Constitution or the Charter of Rights and Freedom, they all, in fact, are treated as "scripture."

Hence, scripture - if you will, may have changed, but the devil - read its abuse, remains the same whether that abuse exists as denial of due process, false imprisonment, character assassination or the failure to uphold the presumption of innocence. All in all, this is being done, in the same breath as they chant, proudly, "For the Glory of France!"*Associate professor of International Affairs at Qatar University