'Trolling' for Russia in the Balkans 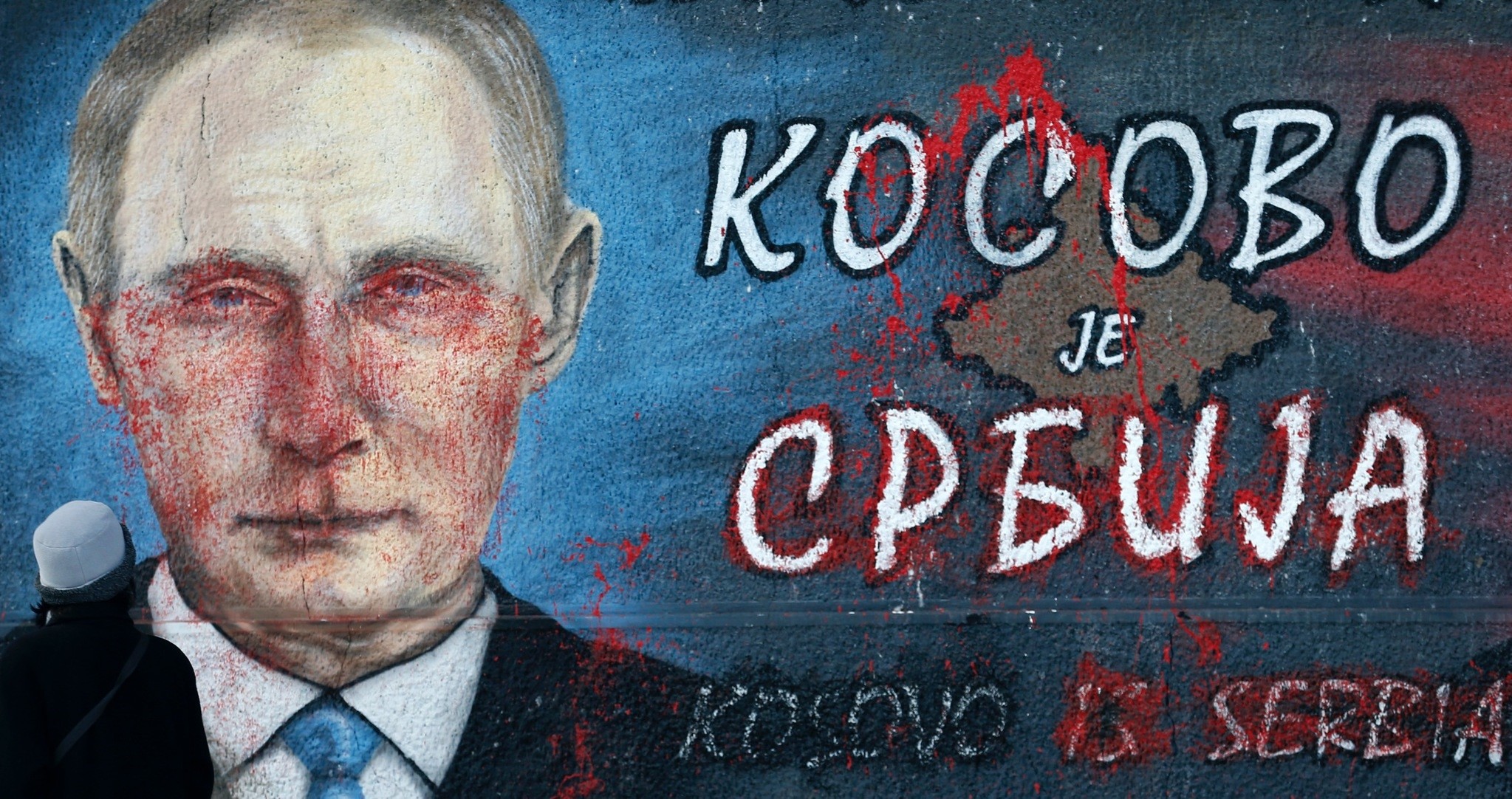 A few days ago, 13 Russians and three firms were charged by the office of Special Counsel Robert Mueller for meddling in the 2016 U.S. presidential elections. Apparently, enough material that supports the theory of Russian meddling was found. The Russians are accused of spreading propaganda through social media by using "bots" and for various intelligence operations, like hacking the emails of the Democratic Party and many other accusations. Social media activism and fake news are believed to be an important reason why Trump won the 2016 presidential elections. Through well planned shadowy operations, the Kremlin managed to influence public opinion regarding the candidates.The United States is not the only country where Russians are actively running operations aiming to weaken the Western-built international system.

Following the crisis over Ukraine and Crimea in 2014, the Kremlin decided to operate under the aggressive premise of "act to widen the cracks that have started appearing in the West in order to bring the system down." One of the areas where Russians are the most assertive is the Balkans. During the U.S. presidential campaign, Macedonia served as one of the main hubs for Russia's strategic diversions against the West. As a country of many well educated but unemployed IT experts, Macedonia was turned into a factory for creating thousands of fake news articles that shaped the public opinion of millions of Americans regarding the presidential candidates. The news they were producing were in line with supporting Trump's victory, who during the campaign, demonstrated a softer stance toward Putin and Russia. This made the Kremlin a shadow campaigner for Trump's victory.

As the Kremlin is interested in other regions as well, much of the fake news and social media trolling is directed to influence regional politics in the Balkans. This sensitive region historically played an important role in Russian foreign policy. Pro-Russian "bots" try to produce fake news content and social media propaganda in the direction of undermining the regional status quo shaped by the EU, the U.S. and NATO. In general, trolling activities promote Russophilia and spread local nationalism, especially among the Orthodox Christian population, that automatically implies the rise of anti-NATO and anti-EU sentiments.

But, the trolling activism is very flexible in shifting the roles and discourses. It is a perfidious shift to discourse that is not in line with the traditional understanding of spreading Russophilia or Orthodox Christian solidarity against the "assertive" West. The same trolls use similar methods to shoot two birds with a stone, with targeting Bosniak political by promoting emotionally charged pro-Turkish sentiment among the Bosniaks, thus aiming to bit by bit distance them from the EU and NATO umbrella, which in turn would undermine the support of the West regarding the Bosniaks. In the last few months, social media has been flooded with fake profiles and groups created for the propaganda purpose that promote "Erdoganism," Turkish nationalism, Turkish inspired anti-Westernism, and neo-Ottomanism.

Even news portals like Saznajemo.net, which sometimes publishes fabricated news, were launched. The portal just recently published news regarding President Recep Tayyip Erdoğan's visit to the Vatican, which was totally fabricated by not stating even one source. To put it simply, a complete lie was shared in order to present Erdoğan as a "tough" defender of Muslim rights, who is ready to challenge even the Pope himself. Obviously the Bosniak public is the targeted group here. What is common with the pro-Russian sites is the content that is full of the blame game when it comes to the West. The aim is to spread Euroscepticism among the masses. To make them think about the geopolitical alternatives. It is not hard to see that it is the same kitchen where other spins and fake news are prepared. The Turkophilesentiment is instrumentalized by the Kremlin's overall strategy of creating chaos in the region.

By distancing the Bosniaks from the NATO and EU, at least emotionally, the Kremlin would side them with the Bosnian Serbs in opposition to the country's Euro-Atlantic integrations. Counting on the fact that Turkey does not have a capacity to protect the Bosniaks in case of an armed conflict, this would ease the position of Serbs in the country against the relative Bosniak majority. By taking the direction that is suggested by the trolling, the Bosniaks will get themselves isolated by their own hands, while Russia will still remain a backer of the Serb position in the country.

Probably aware of the fact that general preferences regarding Euro-Atlantic integrations cannot be shifted that easily, this propaganda could at least divide the Bosniak political milieu into two ideological camps, pro-Western and pro-Turkish, thus further weakening their already damaged unity. It could crack on similar ideological lines as the Serbian political milieu already is. Those who orchestrate the propaganda count on the fact that one day the voices of this emotional blindness will bear fruit by starting to influence Bosniak politicians. The possibility is a formation of a group that might become a strong lobbyist force inside Bosniak political life if the number of supporters of the idea gets bigger. There is already such a group taking shape around the ruling Bosniak Party of Democratic Action (SDA). All in all, this is a long-term strategy, which if continued, might start bringing about harmful results, as the Euro-Atlantic integration of the country is on lockdown. The first serious example of trolling that happened in 2014, in which a fake Facebook profile posted news saying President Erdoğan threatens those who "touch" Bosniaks with "a hundred million of Turks," was published by all regional media as relevant news.

This fake news even caused a diplomatic dispute when Bosnian Serb leader Milorad Dodik went to Belgrade and with Aleksandar Vučić, the Serbian prime minister at that time, gave a statement in which Turkey was accused of being a distracting factor in the region. What was the real purpose of the spin can be seen in the fact who politically benefited the most from it. The crisis was instrumentalized by Dodik. By using the spin, he further increased tensions in the region. This is his classical method of trying to present Bosniaks as "Erdoğan's fifth column in Europe," and trying to sell the story how they are trying to hand over the country to the Turks. By spreading this kind of propaganda, he aims to isolate Bosniaks from the "blessings" of the West they enjoy. He is aware that reckless and overemotional Turkophilia serves the Russian and Serb interests in the region. It is easier to deal with the Bosniaks who are isolated to Turkish support only than having the West on their side.

After the aforementioned incident and invasion of Turkophile social media profiles, who are spreading emotional material regarding the Ottoman past, and Turkey's role as the defender of the region's Muslims across the globe flooded the viral space. The names of the profiles and social media groups are "Bosnia 1463," "News from Bosnia-1463," and "Ottoman Empire 1463," all suggesting the year when the country was conquered by the Ottomans. Much of the material that is shared is exaggerated and overemotional, where Ankara is presented as being stronger than it really is. Analyzing the content that is rapidly spreading through social media, some would get the feeling that Turkey is the strongest country in the world.

Turkey's recent technological and military achievements are a very common subject of the propaganda. The aim of the activism is to spread an idea that Turkey is a power that is coming to the region, that cannot be stopped by anyone, and how only surrendering is an option. Similar emotions are spread by theRussophile trolls, that are presenting the Kremlin as much stronger than it really is. Another common point is anti-Western sentiment. Examples of a Western plot against the Ottoman Empire and modern Turkey are common subjects of published video material. Parallels between today's Western world and the great powers of 19th and 20th centuries are being drawn. The fact that the Ottoman Empire suffered the most at the hands of the Russian Empire is very perfidiously ignored. After all, the Great Power that killed the most Ottoman soldiers and civilians is undoubtedly Imperial Russia. All this suggests that beside some "dreamers" among the Bosniaks, these emotions are instrumentalized by the same centers that are trying to undermine the EU and NATO in the region, thus isolating Bosniaks.

THE TRUMP CARD IN SYRIA

A similar case of "isolation by the Kremlin" was done to the Syrian opposition. Russia managed to squeeze out the Americans from the negotiations over Syria by using another NATO member, Turkey. Aware of the fact that it could impose its will more easily on Turkey rather than on the U.S., the Kremlin perfidiously isolated the Syrian opposition to Turkish support only. In the Astana peace talks, Turkey and the opposition were left isolated, as both Moscow and Tehran backed Assad. This was reflected on the battleground, where the Syrian opposition is squeezed into a narrow territory close to the Turkish border. In the long-term, losing the support of everyone besides Turkey led to a scenario where the opposition from the once favorable position is now in a situation of losing almost everything.

The tension between the U.S. and Turkey benefited the Russians, while the heaviest price was paid by the Syrian opposition. By inflaming the Turkophile and Neo-Ottoman emotions among the Bosniaks through fake news and social media bots, Russia is trying to cause the same scenario. As the Syrian case benefited Assad, in the Bosnian case it would benefit Dodik. Both the Kremlin and Dodik know that relying solely on Turkey would have a catastrophic outcome for the Bosniaks. All that for the sake of pushing out NATO and the EU from the region. Losing support of the Western bloc might lead to the same destiny the Syrian opposition witnessed.

Another indication that Ankara might be influenced by Russia promoted ideas vis-à-vis the Western Balkans is seen in the new premise that Turkey decided to follow in the region. Turkey aims to further strengthen the cooperation between Serbs and Bosniaks. It is seen in the trilateral meeting and the latest Belgrade-Sarajevo highway project that is going to be financed by Turkey. In principle, this is not a bad idea, but the question remains, who would stop Serbia from preferring Dodik and Republika Srpska and further suppressing Bosniak-Croat economical capacities, when on the Bosnian side you have a Serb who is the Bosnian minister of foreign trade, or you have Dodik as a Serb representative in the Bosnian presidency office, as his candidacy for the position is already being speculated on.

Maybe it is still too early to speak about disaster scenarios, but if irrational propaganda continues for some time, the geopolitical reality for Bosniaks might become more unfavorable. The scenario becomes more realistic in the context of the EU's continued passivity in the case of Bosnia and Herzegovina and the EU's further cracking on the lines of selfish national interests. Ignorance of the apparent change of public opinion regarding Euro-Atlantic integrations threatens to change the overall paradigm. A small minority of those free of realpolitik sensitivities, who in an irrational manner promote "unreal" alternatives, might become a majority one day. In short, a perfidious social media activism will start bringing unwanted results. If realpolitik thinking does not prevail it will lead to an isolation of the Bosniaks, whether it is done consciously by paid contractors or by a group of emotionally driven enthusiasts. At the end of the day, it won't matter.