U.S. pretends its aim is to limit Iranian presence in Syria 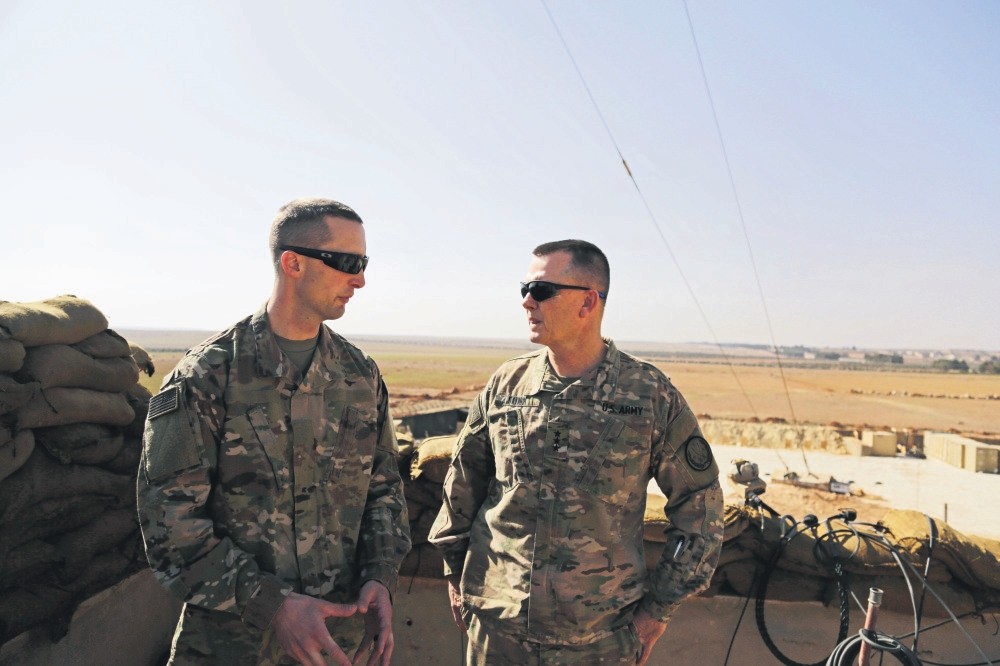 If the U.S. really wanted to limit Iran's presence in Syria, it would not work with the People's Protection Units- (YPG) dominated Syrian Democratic Forces (SDF), which have not fought a single battle against Iranian-backed militias, but with Iran's historical rival in the region and NATO partner Turkey. Also, Turkey's leverage over the Syrian opposition is a strategic key to limit and, if necessarily, indirectly fight Iranian-backed militias in Syria. The Syrian opposition sees Iranian militias as invaders and blames Iran for the survival of Bashar Assad.

The U.S. listed the YPG as the Syrian affiliate of the PKK, which is an internationally designated terrorist organization, but with the U.S. decision to aid the YPG in Kobani, surprisingly the group was deleted from the U.S.'s terrorist organizations. While many actors like the Syrian opposition who fought Daesh since its arrival in Syria or the Syrian peshmerga forces, which are affiliated with the pro-Barzani Kurdish National Council (ENKS), the U.S. knowingly chooses to work with the YPG. Over time, the U.S. formed the SDF, claiming it to be an Arab-Kurdish alliance while its entire leadership and command were PKK veterans. Arab elements in the formation existed as front groups for the YPG. However, after Daesh was widely eliminated in Syria, the U.S. claimed to expand its purpose in Syria from only defeating Daesh to limiting Iran.

U.S. Secretary of State Rex Tillerson said U.S. forces will stay in Syria to push against Daesh, Assad and Iranian influence. The U.S. intends to maintain an open-ended military presence in Syria to fight Daesh and also to provide a bulwark against Iranian influence, ensure the departure of the Assad regime and create conditions for the return of refugees. Breaking its promise to Turkey and Russia that the U.S. only intends to fight Daesh in Syria, which would mean a limited presence, the U.S. expanded its purpose to stay in Syria until a solution is found, which basically means an unpredictable U.S. military operation in Syria. Even if this habit was visible due to the U.S. military bases in northeast Syria, Tillerson's statement marks a turning point. The U.S. also planned to establish a 30,000-strong border security force with the involvement of the YPG, a plan that incensed Ankara.

While the U.S. claims to expand its partnership with the YPG in order to limit Iranian influence in Syria, its forces are located at Turkey's southern border and not near strongholds of Iranian influence like the Syrian-Lebanese border, southern Aleppo, Damascus and the coast. In addition to the misplacement of U.S. troops to limit Iran, the U.S. is working with a force that never fought a battle against Iranian-backed militias. In contrast, the YPG has a long history of working closely with Iran since the beginning of the Syrian war. Especially before the U.S.-YPG partnership, Iran and the Assad regime were the main weapons suppliers for the YPG. Also in the city of Aleppo and especially Afrin, the YPG worked with Iran and the Assad regime. For example, the villages of Nubbl and Zahra were of strategic importance for Iran. During the time these villages had opposition forces on three sides, the YPG in Afrin provided Iranian-backed militias in Nubbl and Zahra with supplies.

Even if the U.S. manages to break the YPG's cooperation with Iran, the alliance formed with the SDF was not formed to combat Iran, but Daesh. Many Arab fighters and Arab units in the SDF only joined for the to drive Daesh from their homes. If the SDF got involved in fighting with Iranian-backed militias and the Assad regime, the SDF alliance would easily collapse. Also within the SDF, units like the Senadid forces have good links to Iran's Islamic Revolutionary Guard Corps.

Morevoer, during Turkey's Operation Olive Branch to clean Afrin of YPG militants, the YPG used Iranian weapons against the Turkish Armed Forces (TSK) and the National Army – a unity of Free Syrian Army (FSA) factions. Additionally, the YPG has used the Iranian Toophan ATGM anti-tank missiles, which is a copy of U.S. TOW missiles. It is also rumored that many ATGMs used by the YPG in Afrin were supplied by Iran. Iranian state media has been broadcasting from Afrin and publishing YPG propaganda since the beginning of Operation Olive Branch.

If the Trump administration would be honest in its efforts to limit Iranian influence in Syria, the U.S. would work with the Syrian opposition and NATO partner Turkey. Turkey, as Iran's historic rival, also hosts several important NATO military defense systems to stop Iranian aggression. However, the U.S. seems to prefer to work with the YPG-dominated SDF, which has neither have fought against Iranian-backed militias nor has the geographic reach or motivation to limit Iran. However, if the U.S. faces reality and decides to work with its NATO partner to limit Iran in Syria, it also has to abandon the YPG in order to get Turkey in its boat.

* Analyst for the Middle East Foundation in Ankara. He is also an editor for the Suriye Gündemi news website