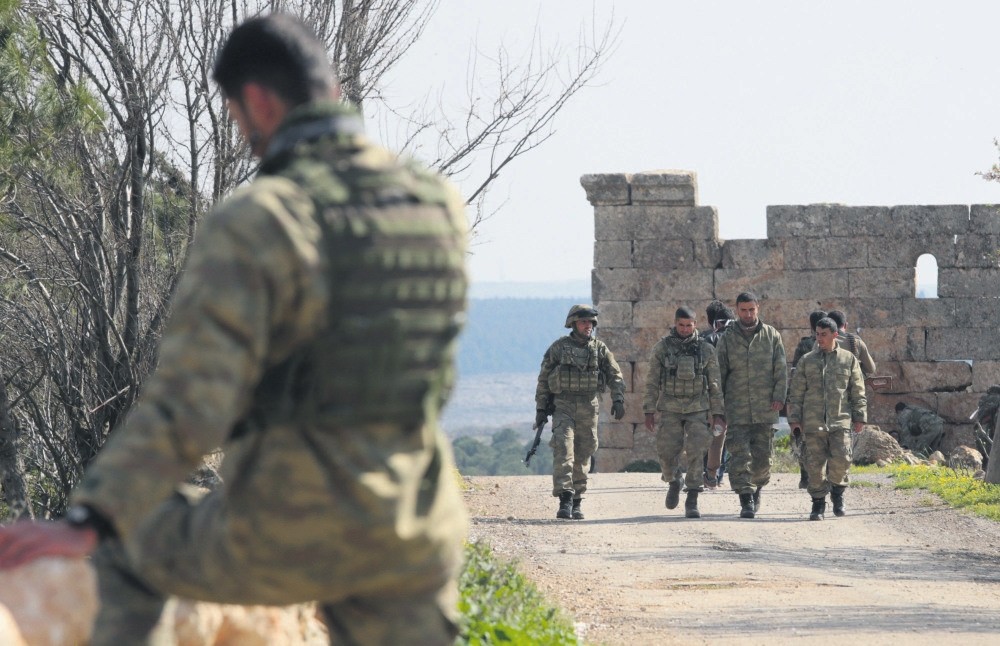 Turkish soldiers prepare during an offensive as part of Operation Olive Branch against the YPG, Der Mismis, Afrin, March 13.
by İbrahim Karataş
Mar 17, 2018 12:00 am

It is hard to estimate the number of weapons in Syria today, but it is probably higher than the Syrian population. With an ongoing war, we can safely assume that there is a direct correlation between the number of weapons and the number of Syrians that are killed, wounded or displaced. The U.S. alone contributed to the stockpile of weapons with at least 5,000 trucks containing hundreds of thousands of machine guns, rocket-propelled grenades (RPGs) and other heavier weapons.

In addition to these deadly weapons, there are hundreds of thousands of soldiers, armed militia groups and terrorist organizations operating in the country. And the number of countries involved matches the number of adversaries in World War II. Some analysts rightfully argue that a small-scale world war is taking place squeezed into Syria. The Syrian war also reminds us of the Cold War as the U.S. and Russia are both using proxies on land while their own forces restrict themselves to functions such as air support.

If we consider the war in Syria as a prototype of previous wars, there are some Turkey-related differences that are worth mentioning. Turkey can be deemed a separate, third bloc whose actions and policies are compellingly more different than those of the other two rival blocs. Initially, we should recall that Turkey is formally allied with the West as a long-time member of NATO. However, when its Western allies displayed a double standard on its democratically elected government and instead supported terrorists groups such as the Gülenist Terror Group (FETÖ), which attempted a violent coup on July 15, 2016, Turkey drifted away from the West. Turks feel certain that FETÖ members were assisted by Western powers in their coup attempt that killed 249 civilians and left more than 2,000 wounded.

Therefore, July 15 was a turning point for Turkey to launch an offensive defense against perpetrators and their supporters. First, FETÖ members who had infiltrated state and military institutions were identified for trial. They have then either been imprisoned or discharged from their positions, and many cases are still ongoing. In the aftermath of the failed coup, Turkey expected support from its Western allies, but they were only concerned with the putschists' treatment. It shocked the Turkish state and society.

It is important to analyze Turkey's military operation in northern Syria in this broader context. Having dealt with the FETÖ threat, Turkey needed to further its fight against other terrorist threats posed by PKK-affiliated groups and Daesh. It immediately started a counterterrorism offensive in 2016, dubbed Operation Euphrates Shield, against Daesh. The terrorist groups were gathering on Turkey's 934-kilometer border with Syria. With the offensive, Turkey emerged as an independent power in the region. With its first major operation in the war, it liberated the Syrian cities of Jarablus and al-Bab from Daesh terrorists.

However, the U.S. was somehow disturbed by this operation and criticized Ankara while Russia, in contrast, seemed to support Turkey. The U.S. was apparently unhappy since the Turkish military hit all terrorist elements including those of the U.S.'s ally, the People's Protection Units (YPG), the militia of the Democratic Union Party (PYD). By smearing Turkey's operation, the U.S. administration was also promoting Daesh while helping the Marxist-Leninist PKK-affiliated groups form a statelet, which is an existential threat to Turkiey's national security and stability. The U.S.'s insistence on this policy to strengthen the YPG forced Ankara to pursue a counterterrorism campaign on its own in Syria. That is why it recently started Operation Olive Branch in Afrin with plans to advance to Manbij.

Turkey is using its right of self-defense under international law, as Daesh and the YPG are on its border. The U.S., Russia and other countries complaining about Turkey's presence in Syria cannot explain why they themselves are in Syria while Daesh is active near Turkey's border.

If the only reason for other countries to engage in military action in Syria is the Daesh threat in Syria – and Iraq – would they accept, for example, an offer from Ankara to unilaterally fight against Daesh on behalf of the civilized world? Is it not awkwardly interesting that dozens of countries combined cannot defeat Daesh? Could it be because the existence of the brutal organization is essential for designing the region? Since they will deny the implications of this question, let us suppose that all these powerful countries, particularly the U.S., are truly in Syria to defeat Daesh. Even then, it is time they acknowledge the legitimacy of Turkey's intervention. And it may be a good start to stop spreading further false propaganda.

The most shameful aspect of the Syrian puzzle is the silence from the international community on the mass killings of the civilian population in the region. While the U.S. is preoccupied with ensuring the security of Israel and helping the YPG build a terrorist state, Russia and Iran focus on maintaining their military bases and keeping Bashar Assad in power. However, the plight of the civilian population seems to have no place in their policies. The real Syrian people are all displaced and none of the actors mentioned above move a finger to help them rebuild their lives. Furthermore, none of these actors welcomed a meaningful number of Syrian refugees. Remember what U.S. President Donald Trump said about refugees and immigrants. While he closes the doors to refugees, he seems comfortable with the deployment of U.S. troops in the cities where these displaced people once lived. Similarly, the EU has broken many of its promises to at least assist Ankara with the financial burden of the refugee influx.

In contrast, Turkey has well over 3.5 million refugees and is taking concrete steps such as Operation Euphrates Shield and currently Operation Olive Branch to fight against Daesh and YPG terrorists, trying to allow the rightful owners of occupied territory to return to their homes. For instance, Operation Euphrates Shield paved the way for nearly 160,000 Syrians to return to their homes in Jarablus and al-Bab in 2016. The more recent Afrin operation is also likely to do the same. More importantly, Turkey has taken in more than 3.5 million Syrian refugees and provides them education, healthcare and other services such as the more than 600,000 Syrian children attending schools in Turkey. From this perspective, Turkey is carrying all the burdens of the Syrian war regardless of its root cause.

By conducting counterterrorism operations both in Syria and within its borders, Turkey is merely fulfilling its responsibility to protect its own and neighboring people from terrorism. Perhaps the answer to why the Turkish operation is not supported by other players like the U.S. lies here.*Istanbul-based journalist