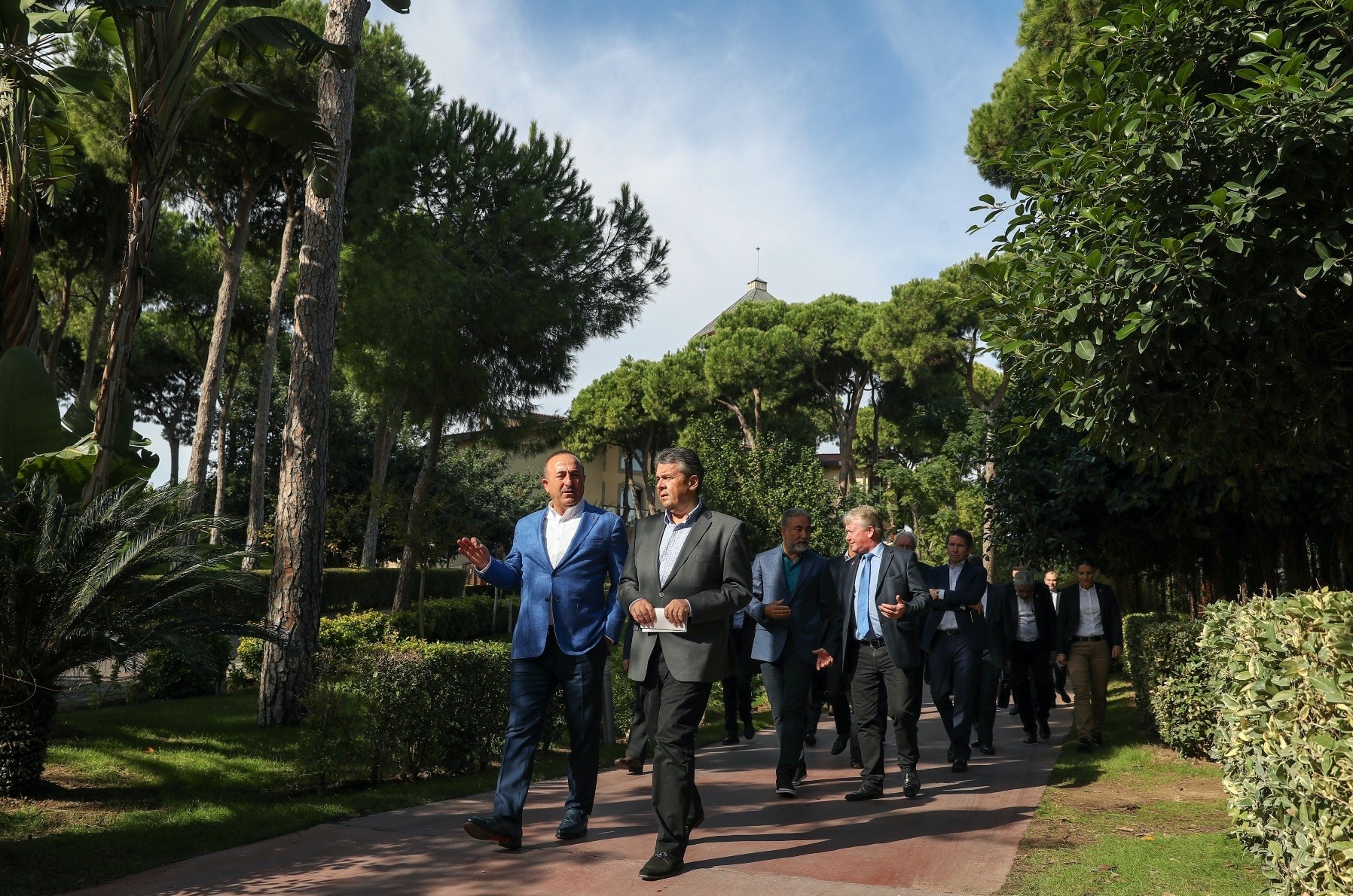 The former German FM, Sigmar Gabriel, had struck up a healthy relationship with his Turkish counterpart, Mevlu00fct u00c7avuu015fou011flu. In an article published by Der Tagesspiegel, Gabriel described Turkeyu2019s Afrin operation as a direct message to the U.S.
by Markar Esayan Apr 01, 2018 12:00 am

Germany's former foreign minister Sigmar Gabriel recently wrote an opinion piece titled "Turkey and the West after Afrin: Afrin is a message to the U.S." for the German daily Der Tagesspiegel. Though I do not agree with everything he said in that article, Gabriel has demonstrated a quite realistic approach to Turkey's position in Syria in particular and to its foreign policy preferences in general. For years, I have persistently emphasized in my column in Daily Sabah, along with my other distinguished colleagues, that correct perceptions by the U.S. and the EU about Turkey have critical importance for the world. Unfortunately, we could not create a mainstream tendency in this regard yet.

So, I devoted a large part of this piece to Gabriel's article since I found it quite relevant. Gabriel is the former foreign minister of such an important country as Germany, the powerhouse of Europe. He himself had also succumbed to pre-election populist rhetoric occasionally during his tenure as minister. But even in those "tense" periods, Gabriel stood out with cool-headed remarks.

I am among those who continue to think that despite all the adverse forces that challenge the continent, Europe still has a considerable potential for rationality and common sense. Europe and Turkey are two significant geographies that are closer and more intertwined than some may assume. While the fact that Turkey is a Muslim country and is the successor to the Ottoman Empire overshadows this reality to a large extent, fears and prejudices cannot totally obliterate facts. Turkey is very important for Europe, but the opposite is equally true. This importance cannot be limited solely to advanced economic relations.

During the past three centuries, Turkey had been deeply influenced by European culture, decided to adopt some of its elements and faced its own dilemmas. However, it had internalized its identity as a Muslim but Western country, state or nation. Facts cannot be ignored. At the same time, a sizable portion of Turkey and particularly Istanbul, a world capital, is on the European continent. Turkey is a secular, democratic state of law. It has a highly strong economy and army. Its young, dynamic, energetic and multicultural people embrace Western lifestyle with its manifold aspects. It has bright prospects. It is located at the confluence of routes of energy, trade and culture, at a continental passageway surrounded by three seas.

A POSSIBLE CONFLICT BETWEEN TURKEY AND THE U.S.

Amid the hullabaloo and chaos of everyday life, these permanent and significant facts may be overlooked at times. And that is what Gabriel also complains about. Noting that the U.S. seems to either evaluate the current tensions with Turkey as something temporary which can be contained, or it has lost sight of the geostrategic role of Turkey, Gabriel added that "The first assessment would be a mistake. The second would have disastrous consequences, especially for us, Europeans."

Indeed, Gabriel is right in thinking so. Again, his view that "Turkey is not afraid of the geopolitical consequences of a possible conflict with the U.S." is also correct. Over the years, we have also repeatedly emphasized that Turkey is definitely determined to take every kind of risk, particularly a crisis with the U.S., over its red lines such as the creation of a PKK statelet in Syria. Turkey is not fond of deception. For instance, it warned the world for a long time that it would intervene in Afrin. It called all its allies, especially the U.S., to make efforts to prevent this. This demand was voiced many times during leaders' summits. Turkey assumed responsibility for this purpose, and not only by taking in nearly four million refugees. It had presented lots of plans and proposals to both Obama and Trump, including a plan to drive Daesh out of Raqqa with its military. In return, the U.S. has supplied 5,000 truckloads of heavy weaponry to the PKK's Syrian arm, the People's Protection Units (YPG), and the U.S. Congress allocated $600 million to the group.

When all these initiatives failed to bring results, Turkey launched the most successful operations in Syria so far with Operation Euphrates Shield and Operation Olive Branch and completed them in a short time. And it did this in line with international law and Article 51 of the U.N. Charter.

Gabriel says, "Turkey no longer wants to bind itself to the West," which is correct. But we have to put this remark in context as well. As a sovereign state, Turkey has every right to demand an equal relationship, to see its allies stand beside it when risks to its survival emerge and oppose its allies' patronage of terrorist organizations that kill its citizens or plot coups within the country. Otherwise, Turkey is not drifting away from the Western alliance. It has never harbored such intentions. If those who accuse Turkey question how they will react when they face the same injustices done to Turkey, the facts will become clear on their own.

It seems that Gabriel also thinks it is time to end that double standard, which is definitely a correct approach. Gabriel says that a new Europe-wide strategy is needed in dealing with Turkey to prevent its disengagement from the West and adds that despite some criticism toward Turkey there should be more effort to improve relations with Turkey. According to him, as the ineffective sanctions against Russia show, problems would not be solved through such measures and Turkey certainly would not be impressed.

The stance of the U.S. and EU toward Turkey during the last five to six years has contained some kind of shameful arrogance and irrationality. The European Council, which I am also a member of, decided to reopen a political monitoring process against Turkey following a rather biased report, though it should have lifted the process. The European Council and the European Parliament have adopted extremely subjective reports. The customs union deal update, which the EU demanded from Turkey, was halted by a group of countries led by Germany despite a positive evaluation by the European Council. Also, Pre-accession Assistance (IPA) funds were reduced.

On to the issue of the PKK/YPG and Afrin, Gabriel makes some relevant remarks again: "The Turkish military intervention in Afrin is a clear message to the U.S.: No post-war order in Syria should be made without the consent of Turkey, and no Kurdish control of any kind of regional entity would be accepted by it." Gabriel points out that the YPG and the Democratic Union Party (PYD) are not banned in the U.S. as a terrorist organization, nor in Europe or Germany, but that for Turkey, and for most international observers, the separation between the PKK and the YPG/PYD is rather artificial.
Emphasizing that the relationship between the PKK and YPG is not only ideologically and symbolically very close, Gabriel adds: "One must continue to assume that the YPG and the PYD are under the strategic leadership of the PKK, but have relatively large operational freedom." Here, only the word "Kurdish" within the sentence "Turkey would never allow Kurdish control in Syria or in other areas" is problematic. Turkey opposes terrorist organizations like the PKK and YPG that abuse Kurdism. Without Turkey's support, the Kurdish Regional Government (KRG) in Iraq would not have managed to survive. One can give many such examples. The Daesh attempt to capture Ayn al-Arab was repelled when Turkey opened two corridors for the peshmerga. This is not a Kurdish problem but only a terrorism problem.

Both the U.S. and Europe know quite well that the PKK is a terrorist organization and that the PYD/YPG is its Syrian arm under the leadership of Abdullah Öcalan and Qandil [the PKK's headquarters]. However, Turkey had to explain its position as if that was a newly discovered fact. Is it possible for Daesh to hold rallies in any European country with its flags, occupy offices of political parties, attack consulates, extort money from citizens, or run drug operations? But the PKK can do all these in Europe.

With Operation Euphrates Shield and Operation Olive Branch, Turkey has carried out hugely successful operations, during which there have been no civilian casualties, and shattered the myth of the invincibility of Daesh and the PKK/YPG. Turkey would not accept a fait accompli in Syria. As Gabriel also recognized, Turkey is prepared to pay the price and take every risk for that. Germany and France would do the same in a similar situation. For if that regional design effort succeeds, Turkey will cease to be a sovereign state. Let me put it clearly: Whoever supports this effort is not Turkey's friend and Turkey is ready to sever all relations with that state or group and face a crisis.

Relations between Turkey, the U.S. and the EU have already suffered greatly. And believe me, if relations have not further deteriorated or collapsed, it is because Turkey kept its composure in the face of terrible scandals. In order to prevent additional troubles on both sides, Gabriel's remarks should be heeded while keeping in mind that Turkey's pain tolerance rose.

If only Gabriel had expressed these valuable remarks more strongly during his tenure as foreign minister. But we have a saying in Turkish: "Better late than never."